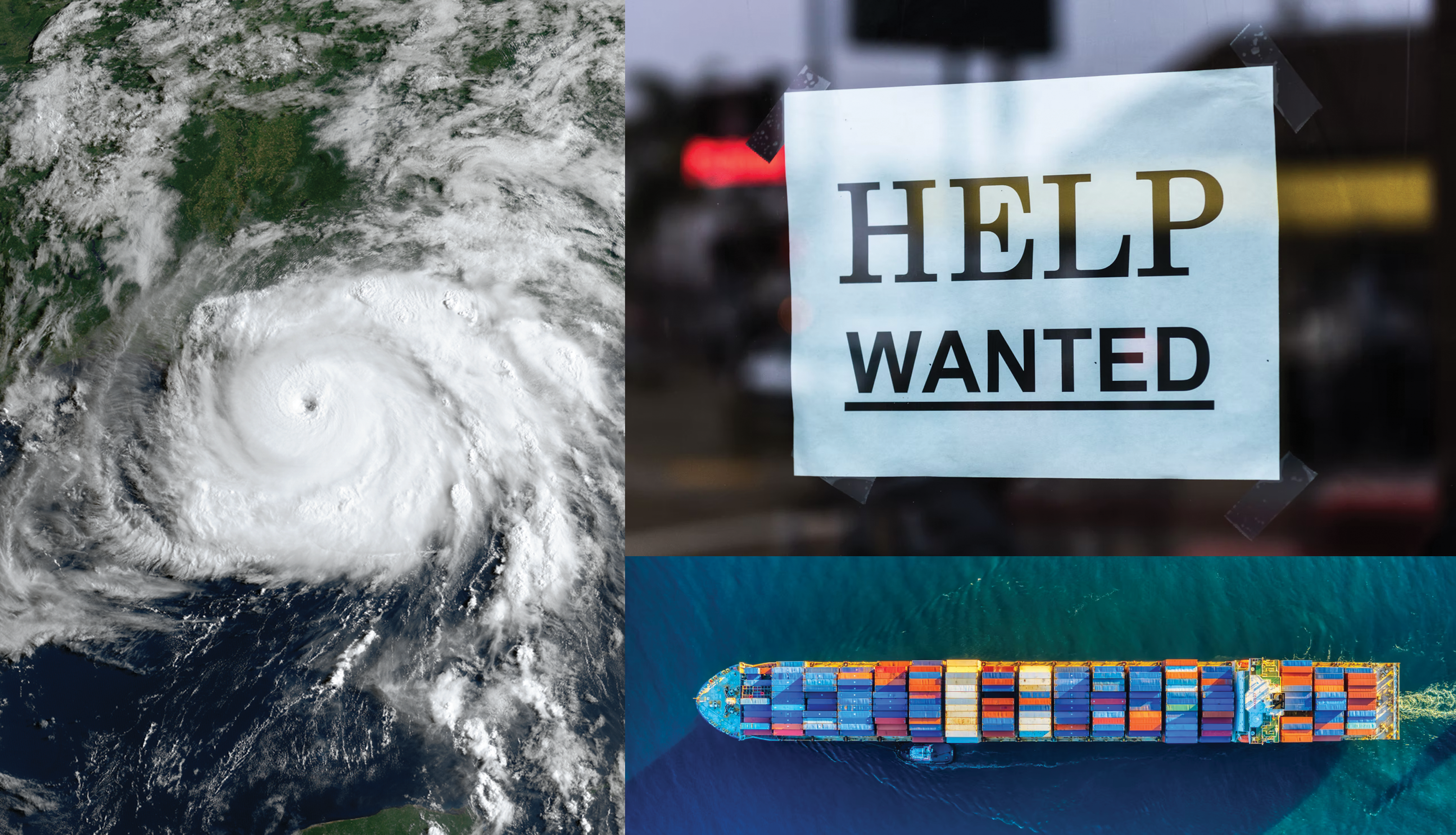 The hits keep coming and Louisiana’s economy is showing signs of fatigue, with unemployment rising, labor shortages extending longer than anticipated and businesses anticipating closures, rather than openings.

The Louisiana Workforce Commission reported 1,712 new unemployment claims for the week ending Aug. 28, the day before Ida made landfall. In the week following Ida, new claims jumped to 9,724, which is a 468 percent increase.

The commission reports that initial unemployment claims for the week ending Sept. 11 rose to 14,042, a 69 percent increase from the previous week.

The last updated number for unemployment in Louisiana came from the LWC in August. At that time, unemployment was at 6.2 percent for the state, down from 7.7 the year before.

The reported national average for unemployment was 5.2 percent in August, according to the Bureau of Labor Statistics.

In the Shreveport-Bossier City metro-area, the last available unemployment numbers were from July. At that time, the LWC reported an average rate of unemployment at 6.1 percent. This is down from 9.4 percent the year before.

While Governor John Bel Edwards was the first Democratic governor to opt-out of federal pandemic unemployment assistance, which gave those on unemployment an additional $300 a week, he was able to negotiate an increase to the state’s weekly unemployment benefit amount with House Bill 183.

Currently, weekly benefits are $275, an increase from the $247 claimants could access. However, not all claimants get the full amount of unemployment available since the amount a person receives is based on several factors, including what they were making before they lost their job.

Recently, Edwards also reduced eligibility criteria to allow for unemployment “disaster-related claims.” This change was made through an executive order that applies statewide.

Many critics have said that long-term unemployment insurance, direct stimulus payments and expanded benefit programs have contributed to a dragged-out labor shortage, which is something that Louisiana is also contending with.

However, studies are divided on whether or not this is true.

In August, a paper published by economists and researchers from Columbia and Harvard universities showed only a slight uptick in job growth with federal unemployment benefits being stopped, while a September analysis by Mercatus Center at George Mason University cited 13 different studies that examined the effects of increased unemployment benefits, all of which showed increased benefits led to longer periods of unemployment.

The Mercatus analysis did find that unemployment benefits, with the additional federal dollars, were often more than what some wage earners made at a full-time job.

According to the latest data from the U.S. Bureau of Labor Statistics (BLS), the annual median wage for a full-time (40-hour week) wage worker in the United States is $53,490 per year, or $1,028 per week.

According to job-posting site ZipRecruiter, as of Sept. 11, the average annual pay for an hourly-wage worker in Louisiana is $36,460, which is $701 a week or $3,038 a month. People receiving the full amount of unemployment in Louisiana, with the federal supplemental unemployment funds, would make $547 a week.

Louisiana ranks number 42 out of 50 states for hourly rate salaries.

However, most open job positions- as well as the majority of unemployment claims- come from retail, food service and the hospitality industries, all of which offer some of the lowest hourly wages across any industry. Restaurant workers, for example, still earn less than $5 an hour, relying on tips to make up their salary.

COVID-19 continues to cause problems

One of the biggest factors in unemployment claims and labor shortages continues to be the overwhelming presence of COVID-19.

The state of Louisiana recorded 2,187 new cases of COVID-19 on Sept. 17. Those not fully vaccinated account for 88 percent of active cases and 85 percent of COVID-related deaths, according to the Louisiana Department of Health.

As of Sept. 15, 44 percent of Louisiana’s population was fully vaccinated against COVID-19, according to the CDC.

Shreveport is reporting 1,371 cases of COVID for Sept. 4-17. Bossier City is reporting 996 cases in that same time-period.

On Aug. 2, Gov. Edwards reinstated Louisiana’s statewide mask mandate indoors for all people aged five and older. That mandate was extended until Sept. 29.

These numbers are significant not only from a health standpoint, but also for the health of the economy.

In April, a report revealed that nearly 35 percent of small businesses in Louisiana that responded said they were at risk of closing permanently within the year as a result of the COVID-19 pandemic.

The report was published by Main Street America, a program of the National Trust for Historic Preservation.

According to that report, 58 percent of Louisianans employed by small businesses may face unemployment this year.

Nationwide, nearly 66 percent of small businesses face permanent closure with more than 72 percent of workers facing unemployment, according to reports.

62% do not have an online sales component

During a July 2021 survey, 24.4 percent of surveyed small businesses in the United States claimed that the COVID-19 pandemic had a significant effect on business.

The number of hourly employees who worked a shift between mid-July and mid-August fell about 4 percent, according to Homebase, which supplies employee scheduling software to employers. The number of open small businesses declined 2.5 percent.

In August, Homebase noted, fewer small businesses were open and fewer hourly employees working than in July, indicating that the Covid-19 delta variant may be slowing down the U.S. economic recovery. The company based analyzed trends among roughly 60,000 businesses and 1 million hourly employees for this data.

This was a fear that Louisiana business owners expressed in January during The Advocate’s Economic Outlook 2021 summit, sponsored by Entergy and LCMC Health. The online event took a look at the state’s economy and the impact that COVID-19 had on it.

At that summit, Louisiana Economic Development secretary Don Pierson was “cautiously optimistic” about the economy rebounding, but that was before an historic ice storm blasted the region, the delta variant caused COVID-19 surges all over the country or Hurricane Ida made landfall.

At the time, Pierson said that the key to economic recovery is going to be how quickly people feel safe to resume their normal activities and consumer confidence returns.

During that meeting, Ti Martin, co-proprietor of Commander’s Palace, said that a critical factor in helping restaurants survive is the COVID-19 vaccine, which is crucial in restoring consumer confidence, and while that initially proved to be true, that confidence has faltered with new COVID-19 cases skyrocketing in the state.

Louisiana has more than 2,900 pending applications that total more than $600 million in stabilization funding.

“There are thousands of Louisiana small business owners stuck in limbo waiting to find out if Congress will act to provide the stability they need to make it through this new pandemic threat and into the future,” said Stan Harris, LRA president and CEO, in a press release. “The rise of coronavirus variants like delta threaten to push these restaurants closer to permanently closing their doors. It’s time for Congress to step in and fulfill the promise of the RRF.”

The National Restaurant Association survey found that nationally a majority of consumers have already changed their dining behavior. This faltering confidence is just another hit restaurants are facing after labor costs reach a 10-year high and food and supply prices increase.

The Small Business Administration (sba.gov), and the Louisiana Small Business Development Center (https://www.louisianasbdc.org/) can also offer resources for businesses that are opening, expanding or in need of assistance to remain open.

Not just a local problem

While it would be easy to see Louisiana as a state that is faltering while others are excelling, recent job numbers don’t support that. Job creation for August was dismal, with the economy adding just 235,000 positions, the Labor Department reported on Sept. 17

Economists had been looking for 720,000 new hires.

August’s jobs totals were the worst since January and comes at a time of heightened fears of rising COVID cases, and while the slow down happened across all industries, it noticeably flattened on the restaurant and hospitality sector, which had previously been recovering at rapid speed.