Dr. Scott, an economics professor at LSU in Baton Rouge who produces an annual economic outlook for the state of Louisiana, projects a “not very long national recession” beginning in the first quarter of 2023 and ending in the third quarter of 2023.Much of that can be attributed to the consumer price index being at its worst level in 40 years. “One of the charges of the Federal Reserve is to keep the inflation rate low, but this is a level of inflation that cannot be tolerated,” said Scott.

In addition to inflation, Dr. Scott went on to discuss the housing market and how monthly payments go up when interest rates rise. “Any time interest rates go up substantially, that’s going to cool off those interest-sensitive spending areas, especially durable goods,” he said.

“It will be a 20 percent drop in housing starts,” he said. “And if we’re not buying houses, guess what? We’re not buying furniture and appliances, either, so those industries will start suffering.”

Scott said there have been eight national recessions since 1970, and during all of those times Louisiana’s employment rate actually grew. Including in the Shreveport-Bossier area. “Our economy is going to grow through this recession and part of the reason is because since COVID, our state has suffered three major hurricanes, Winter Storm Uri and a major flood in Lake Charles. When you have that many natural disasters, that’s going to drop your employment rate down initially. But, what happens after a natural disaster hits is we always come back outside of it,” said Scott.

Ranked as the fourth largest MSA in Louisiana with four parishes (Caddo, Bossier, DeSoto and Webster), our area is home to several goods manufacturers and current/upcoming employers.

The Shreveport-Bossier market has been the beneficiary of an unusual bounty of economic wins in the past year, Scott said. The Caddo-Bossier Port is home to several firms. Altogether, tenants at the Port employ around 1,583 people.

The Teal Jones Group is building a $110.5 million southern yellow pine lumber plant near Plain Dealing. The plant should be finished in the fall of next year and will employ 125-plus people making dimensional and specialty lumber products. AEP will spend $100 million on a 77,000 square foot transmission control center in Shreveport on 30 acres within the Resiliency Technology Park. Construction should be complete by mid-2023 and AEP will add 20 jobs (at $115,000 per job).

BRF employs 614 people at its various facilities, including its incubator support for new firms. BRF worked with the congressional delegation to secure a $37 million appropriation for the Global Strike Command.

In Bossier City, Imperial Trading is spending $20 million to expand its distribution center. The expansion will result in 125 new jobs. The Cyber Research Center is a major growing player in the region with 1,700 employees at its three centers. The Center’s new Louisiana Tech Research Institute is scheduled to open near the end of 2022, adding another 400 workers. One center, General Dynamics IT (1,400 employees), has indicated a desire to double its workforce over the next 5 years.

Although employment is rising in the Shreveport-Bossier MSA, Scott warns of the future economic climate around the world in the coming months. Natural gas will become extremely sparse in European countries. Scott also said that “antagonism” from the Biden administration’s push for cleaner energy, halting the XL pipeline and putting a moratorium on oil lease sales on public land and waters will keep oil production below its pre-pandemic level.

More pipelines are being built to move Haynesville gas to the Gulf Coast. The owners of the proposed Driftwood LNG near Lake Charles want to own and control their natural gas supply. In August, Driftwood purchased 5,000 acres in the Haynesville Shale from EnSight IV Energy Partners for $125.5 million. 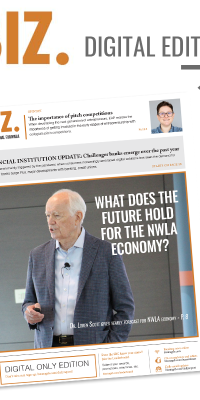