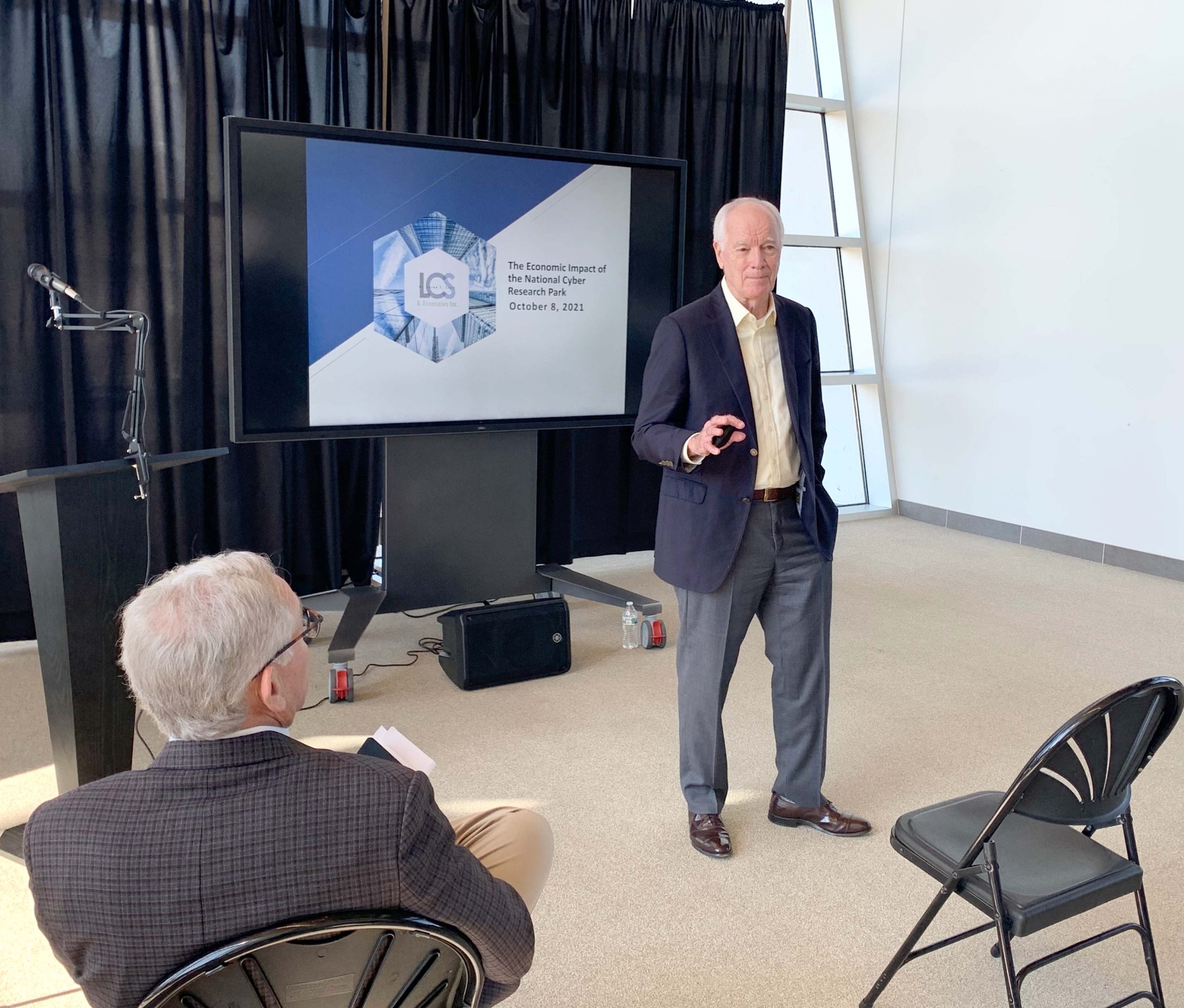 The Cyber Innovation Center (CIC), the anchor of the National Cyber Research Park (NCRP), is fulfilling its promise to grow the economy and diversify the workforce of northwest Louisiana, according to a report by economist Dr. Loren Scott.

The NCRP, consisting of four new buildings and the campus of Bossier Parish Community College (BPCC), has contributed more than 2,000 jobs with employee earnings of $122.9 million. While providing a physical location for government, industry, and academic partners to collaborate, conduct leading research, and develop state of the art technologies, the NCRP has generated $5.6 million per year for local government entities in Bossier Parish.

“Every once in a while, a new gem is discovered that adds significantly to the quality of the crown jewels.  For northwest Louisiana, the new gem is the NCRP in Bossier Parish,” Dr. Scott said. “The NCRP is a very viable economic gem.”

His report showed that in 2020, the NCRP generated for Bossier Parish:

– $127.9 million in new household earnings for residents. This almost equals the earnings of all parish hospital workers ($128.8 million).

Dr. Scott notes that these numbers for 2020 are impressive but will continue to grow over time and planned expansions at the NCRP will also boost these numbers.

Additionally, the NCRP is a benefit to its sister parish, Caddo. Caddo Parish received $178.9 million in new business sales, $95.7 million in new household earnings, an average of 266 new jobs, and $4.3 million in new local government revenues.

Regionally in 2020, the NCRP generated:

According to Dr. Scott’s report, by 2025, the parish will not only have received $62 million in tax revenues generated by activities at the NCRP but will have also gained more than $1.3 billion in new sales for businesses in the parish, more than $1.4 billion in new earnings for parish residents, and an average of 1,313 jobs a year.

“Since CIC’s inception, the vision was always to diversify our workforce and grow the region’s economy. What Dr. Loren Scott’s report reflects is a 14-year investment of hard work not only by CIC and NCRP partners, but of forethought and perseverance by Bossier City, Bossier Parish, the State of Louisiana, and our Congressional Delegation,” said Craig Spohn, CIC executive director and president. “While this is excellent news for our parish and region, this is only the beginning. We have more work to do by continuing our mission to enrich the lives of those in northwest Louisiana.”

American Electric Power, the parent company of SWEPCO, announced in late January that it will invest $100 million to build a new transmission control center in Shreveport (STCC).

The 77,000-square-foot facility will be built on 30 acres in the northwestern quadrant of the new 313-acre Resilient Technology Park, which is located near Interstate 20 and Greenwood Road.

“Louisiana residents know the importance of a stable, reliable utility system and the investments that American Electric Power is making in our state will increase the energy resilience of the entire Gulf Coast,” said Gov. John Bel Edwards.

The project will create 20 new jobs in Shreveport with an average salary of $115,000 and will retain 20 already in the city. The estimates for the project also indicate that 63 indirect jobs will be created as a result.

“I am confident that AEP will find a highly-skilled workforce in Shreveport. This new project will bring high-paying jobs and new economic activity for the northwest region of Louisiana, as well as increased confidence in our vital utilities,” Edwards said.

To secure the project in Shreveport, the state offered AEP a competitive incentive package that includes a $1 million performance based award for infrastructure costs. Additionally, the company is expected to utilize the state’s Quality Jobs program.

Radiance Technologies (Radiance), a national leader in defense technologies and solutions, committed in September to expanding the economic development of the Shreveport-Bossier City region.

“We welcome Radiance’s expansion in Shreveport at BRF’s InterTech 1 facility located on Kings Highway near downtown,” said John F. George Jr., M.D., BRF President and CEO. “Radiance and its CEO Bill Bailey have been supporters of the region since his time here at Barksdale Air Force Base. His title sponsorship of the Radiance Technologies Independence Bowl is another example of his commitment to the area. The new positions coming with Radiance’s planned expansion are high quality jobs for our region.”

To support efforts at both Air Force Global Strike Command and all mission areas across the company, Radiance plans to hire up to 150 high-tech research and development professionals in Shreveport-Bossier City in the next three to five years.

“Growing our presence in North Louisiana pleases me to no end. Barksdale AFB, Shreveport-Bossier, and Louisiana Tech were foundational and transformational for me,” said Radiance CEO Bill Bailey. “Being postured to better support Global Strike will ensure that Radiance continues to do what’s important to us – support our warfighters. The business case for growing in North Louisiana is solid. The BRF, Shreveport-Bossier, and LED have made it known that they want us in Louisiana.”

U.S. Senator Bill Cassidy, M.D. (R-LA) joined the leadership of the Cyber Innovation Center (CIC) Aug. 30, to highlight their work with Air Force Global Strike Command to support our nation’s defense and celebrate the $8 million in funding secured by Senator Cassidy and the Louisiana congressional delegation to continue the technology and cost savings developed by the CIC for the U.S. Air Force.

The funding also provided for the development of a revolutionary air refueling trainer for the B-52 aircraft that is estimated to save $4 million per year in costs and will increase safety for America’s airmen who train at Barksdale Air Force Base. Cassidy has been a staunch advocate for the CIC and Barksdale Air Force Base, including in the Fiscal Year 2023 appropriations cycle.

“We need our military to stay on the cutting edge of science and technology to keep America safe,” said Dr. Cassidy. “The Cyber Innovation Center is doing great work right here in Northwest Louisiana, to ensure that happens.”

In addition to Cassidy’s advocacy for Fiscal Year 2023 on behalf of the Cyber Innovation Center, he supported a Congressional investment in Fiscal Year 2022 that helped the CIC create a solution to the antiquated air crew alerting system that resulted in a $200 million cost savings for the Air Force.

The Cyber Innovation Center itself is the anchor of the 3,000-acre National Cyber Research Park, and serves as a catalyst for the development and expansion of a knowledge-based workforce throughout the region.

Cassidy was joined by Mr. Craig Spohn, President and Executive Director of the Cyber Innovation Center.

“Senator Cassidy is a great friend of the Cyber Innovation Center,” said Mr. Spohn. “He has secured federal funding for us to partner with Air Force Global Strike Command and develop the military technologies of the future. This will help keep America and Louisiana safe from overseas threats. We look forward to continuing our relationship with the Senator.”

General Dynamics Information Technology (GDIT), a business unit of General Dynamics based in Bossier City, announced in early May that it was awarded the Environmental Protection Agency (EPA) High-End Scientific Computing (HESC) II Support Services task order. The task order has a total value of $89.5 million with a one-year base and six option years.

The HESC program provides EPA researchers and scientists the supercomputing hardware, modeling, and data visualization capabilities needed to solve some of the most complex research problems and support the agency’s mission to protect human health and the environment. Applications include atmospheric modeling, computational fluid dynamics, bioinformatics, computational chemistry and statistical modeling.

“We are proud of our continuous support to the EPA since 1978, and this new task order provides our scientific computing experts and the company’s HPC Center of Excellence the opportunity to meaningfully advance EPA’s critical mission,” said Kevin Connell, GDIT vice president and general manager, Science and Engineering.

The Port of Caddo-Bossier celebrated the opening of its new warehouse with a special ribbon cutting on June 30.

The Port was joined by the Red River Waterway Commission and the Louisiana Department of Transportation and Development to cut the ribbon for it’s new 100,000 sq. ft. heavy-load warehouse. The ceremony marked the final conclusion of a project that began construction in October 2019.

Construction was completed in February and in March, Odyssey Logistics expanded their current Port of Caddo-Bossier operations into the new warehouse, giving them a total of 310,000 square feet of warehouse space.

The warehouse space is also housing steel coils for Ternium USA, which is another tenant at The Port of Caddo-Bossier. Odyssey has added five new employees as a result of the expansion.

Ground was broken for The Port of Caddo-Bossier’s newest tenant, Sunny Point Aggregates, on May 11 in Shreveport.

The company is building a new sand and proppants processing facility at the port. When completed, the new facility will occupy a 43-acre tract of riverfront property in an area known as Scopini Island, which is located in Bossier Parish.

This project is a joint partnership between Performance Proppants, the parent company of Sunny Point Aggregates, and The Port of Caddo-Bossier.

Justyn Dixon, president and CEO of North Louisiana Economic Partnership, expressed his excitement at having a new tenant for the Port.

“Each time a company grows in our region, it makes an incredible impact and speaks highly of North Louisiana. It truly takes the entire community working together to achieve economic development,” Dixon said. “Congratulations to The Port of Caddo-Bossier and everyone else involved with this win.”

Advanced Call Center Technologies (ACT) President and CEO Hunter Croft announced in January that the company is investing $1.5 million to develop a new customer care center in Shreveport that will create 600 direct new jobs. Louisiana Economic Development estimates the project will result in 314 indirect jobs, for a total of more than 900 new jobs in Louisiana’s Northwest region.

ACT is moving into the East Ridge Plaza business center in Shreveport and will renovate the site with infrastructure upgrades, equipment installation and additional parking. Upgrades to the site are underway, with operations scheduled to commence in March 2022.

“Advanced Call Center Technologies’ investment in Shreveport is a win for Louisiana’s Northwest region,” said Gov. John Bel Edwards. “The more than 900 jobs resulting from the project will have a positive impact on economic activity in the region. We appreciate ACT’s commitment to the state and are proud of Louisiana’s highly skilled workforce, which helps foster the strong business climate that allows companies like ACT to hit the ground running.”

Philadelphia-based ACT provides multi-channel customer service support, fraud, and dispute management, claim processing and other services to a variety of clients, including those in the financial industry. Established in 1997, the company has more than 10,000 employees across the U.S. and beyond. Operating 24/7, the company provides services in eight languages. 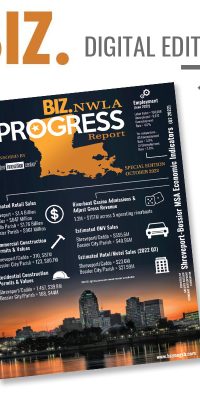