It is not often you see someone “walking the walk” when it comes to entrepreneurship. Many times, the “talkers” are busy talking and the “walkers” have their heads down — grinding away. However, in the case of the late mayor of Minden, Terry Gardner, you saw both, the talk and the walk.

Gardner passed away last month after what seemed a short battle with cancer. He came to Minden more than 40 years ago and the impact he’s had on the community has been evident long before he was elected its mayor in 2018.

“TG,” as he’s been called, started a lawn and landscaping business in Minden, which has expanded to serve many businesses and residents in northwest Louisiana. That business expanded into a full-blown nursery and gift store. TG was far from done.

Over the years, the TG Companies, and The Gardner Group added storage facilities, revitalized local buildings to house other businesses, helped bring a restaurant to downtown Minden, and the list goes on.

All the while, TG personally invested in the community through a host of philanthropic and community interest endeavors. He also spent a great deal of time mentoring the youth of Minden through the Greater Minden Chamber’s Youth Leadership program. There are leaders in Minden today because of his influence.

It was not always “smooth sailing” for TG, as he lost a bid for city council, dealt with personal challenges, and faced many obstacles as Minden’s mayor.

There are also those in the community that took exception to how he did things. However, isn’t that one of the marks of a true “trailblazer”?” If you look at Steve Jobs, Jeff Bezos, or Elon Musk, you would hear some of the same comments during the course of their lives and careers.

No one does everything right in their lives. We are all human. At the end of our lives, we hope that we got more right than we did wrong, and that we learned a lot along the way. While his life was cut short, I can say without reservation that TG got a lot right.

Minden, and northwest Louisiana, has been blessed because he decided to call this area home. Not only did he talk the talk, he walked the walk. We could learn a thing or two from his example.

Rest in peace TG. A grateful community will miss you.

David A. Specht Jr. is publisher and editor of BIZ. and President of Specht Newspapers, Inc. 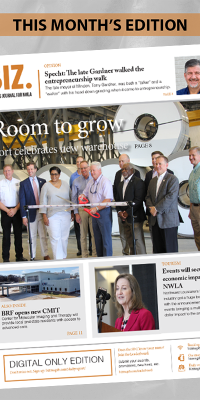