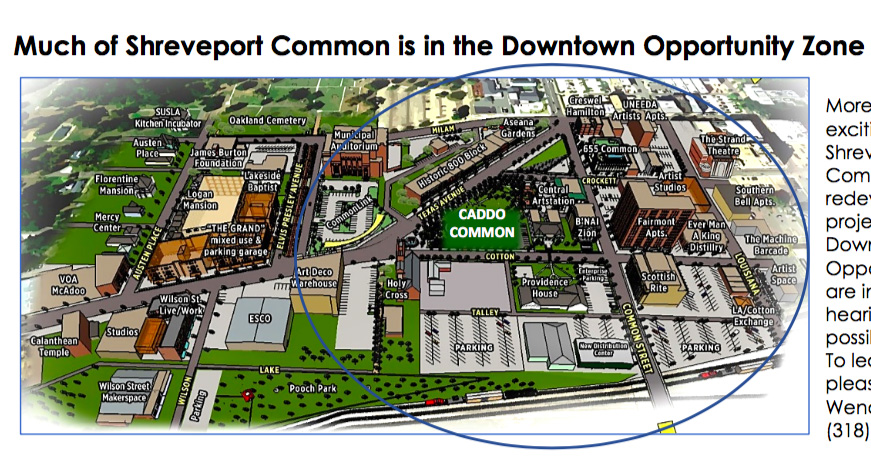 When the COVID-19 pandemic hit last year, entire industries like hospitality and aviation shut down, forcing people to stay home in order to help slow the spread of the disease. Fortunately, most states and local jurisdictions declared construction an essential service, so many contractors were able to work through the strictest of lock downs, but some owners and developers put a halt to their building plans altogether.

Ongoing projects at Shreveport Common were no exception to this effect. But, now that the COVID -19 vaccine is readily available to the public, those projects are starting to begin construction again .

“COVID-19 and the resulting need to shelter has cost lives, hurt families, taken jobs and confined people to their homes. It also slowed some major construction projects,” said Wendy Benscoter, executive director for Shreveport Common, inc. “In Shreveport Common, the UNEEDA Artist Apartments and Every Man A King Distilling with Revenir Restaurant in the former Arlington Hotel are visible examples.”

Benscoter went on to say that Phase II of the Caddo Common Park was to begin a year ago., However, until recently, the City of Shreveport bid process was closed. But, luckily with local government agency buildings starting to open, citizens of the Shreveport-Bossier community will notice an uptick on construction projects in Shreveport Common taking place this year.

“Construction begins within the month on the Mike McSwain designed Outdoor Performance Pavilion and the Mister Station. The completion of the Food Truck Court will soon begin with the installation of the table sets next month and 20-foot LED/Solar-lit Artist-trees to follow. Expect construction to resume on several residential and commercial developments as well,” Benscoter said.

“As private projects in the pre-development stages continue to move forward, we are also working on advancing the Artist Makerspace and other projects that fulfill the community’s values for the area — one that celebrates the history of the area, is creative, is sustainable and is for the community, with no displacement of the current neighbors. The properties on Louisiana at Cotton Street (we call it the Louisiana Cotton Exchange) will be strongest when they open somewhat simultaneously, and the same is true for the Pooch Park off of Wilson St. which will move forward when the surrounding projects are also ready to start,” she added.

Benscoter also noted that the final environmental work will start soon at 730 Crockett at Common.

“Shreveport Common, Inc is grateful to the Jackson and Rosemary Slattery Davis family’s donation of that property.  We plan to get Request for Proposals (RFPs) out by Fall 2020 for that and other properties we are packaging to sell for the best new construction developments sure to advance Shreveport Common,” said Benscoter.

Benscoter went on to mention that as construction projects start to begin, other Shreveport Common activities and events have resumed.

“Shreveport Regional Arts Council (SRAC), Caddo Parish Parks, area artists and arts organizations have already resumed programming in the new park and surrounding area. Keep an eye on Shrevearts.org and SBFunGuide calendars and our Shreveport Common facebook page for a list of events such as UNcommon Weekends every third weekend, Walking Wednesdays and Thursday Health and Fitness in Caddo Common Park.Additionally, SRAC has some fun big events coming to Shreveport this year,” Benscoter said.

“Watch venues as they begin to resume events such as The Strand Theatre, Emmett Hook Center, minicini, and look for performances such as StageWorks and Mahogany Ensemble Theatre at Central ARTSTATION. Finally, Logan Mansion, winner of the state’s SPIRIT AWARD hosts regular events, the Ogilvie Wiener mansion offers weekend tours or you can check out tours in the area offered by SBRides and Robert Trudeau,” she added.

Shreveport Common is a public/private Creative Placemaking initiative to revitalize what was a long-blighted 9-block area at the western edge of downtown and the eastern edge of Ledbetter Heights. Shreveport Common is also a name of the area; a name which identifies and connects what were nearly forgotten parts of this extraordinary place that was always creative, entrepreneurial, and very diverse, Benscoter said. Now the arts and artists are leading visible change in the area with public art and programming which connect and celebrate people and their stories, past and present and developers have created new spaces by saving endangered buildings.

In 2010, the area had suffered from decades of neglect, and 50% of the historic buildings were gone. Of those that remain, 65% were unoccupied, separated by broken concrete and razor wire fences. The crime and perception of crime kept people away.

After a fire destroyed their offices, SRAC was charged with leading the Creative Placemaking community vision plan process for the area. SRAC did so while it raised the funds to renovate their new home, the 10-year empty Central Fire Station, now Central ARTSTATION. It was the first capital improvement in the area in more than 50 years. This became the turning point for the area. It now combines strong community, City/Parish participation, and commitment to the vision planning process. The resulting plan was approved in late 2012 by the Metropolitan Planning Commission (MPC) and unanimously accepted by Shreveport City Council as the strategic plan for revitalizing the area.

Today, the impact is significant; economically, culturally and for the community,” Benscoter added. More than $54,000,000 has been invested in preservation, redevelopment, infrastructure, community spaces and programming.

Now, approximately 70% of the buildings are occupied: 29 properties have undergone preservation and redevelopment, 8 are under construction and 16 are in pre-development. Only 8 major projects remain of the original 36 listed in the original portfolio of projects. The economic impact of Shreveport Common revitalization is expected to surpass the $271 million, as  forecasted by Impact Datasource in 2015.