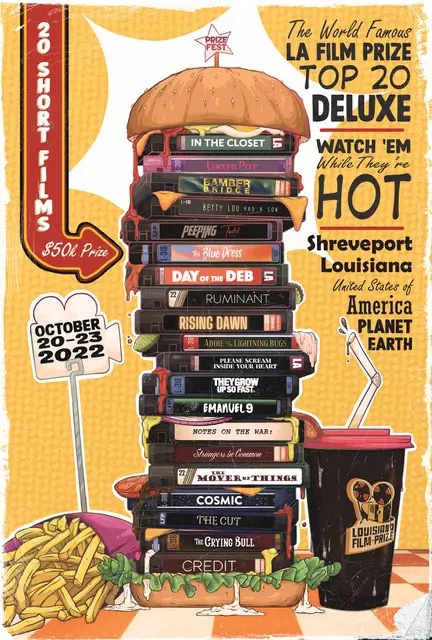 In an 11 year tradition, Prize Foundation revealed the official commemorative poster for the 2022 Louisiana Film Prize.

The poster was designed by Alex Richardson, local artist and graphic designer, and as in years past, features all of the Top 20 films. The poster will be on display and available for purchase during Louisiana Film Prize 2022 (October 20-23, www.PrizeFest.com/film).

“I’m excited to have had the opportunity to work on this year’s official Louisiana Film Prize poster and I’m even more excited to watch all of these amazing films! Consuming 20 Short Films is a pretty ‘Tall Order’, but I’m up for the challenge,” says Richardson.

Richardson also serves as the Marketing Coordinator for the Bossier Arts Council which has come on for Prize Fest 2022 as a satellite theater for the Louisiana Film Prize. The films will be screening there in addition to the downtown Shreveport theaters during Prize Fest’s second weekend, October 20-22.

“Celebrating local artists and letting them celebrate Film Prize is one of our favorite traditions,” said Gregory Kallenberg, Executive Director of the Prize Foundation. “Alex has done an amazing job with this, and we look forward to everyone being able to see this in person at Prize Fest 2022!”

For festival schedule, information about the short films and festival tickets, visit www.prizefest.com.