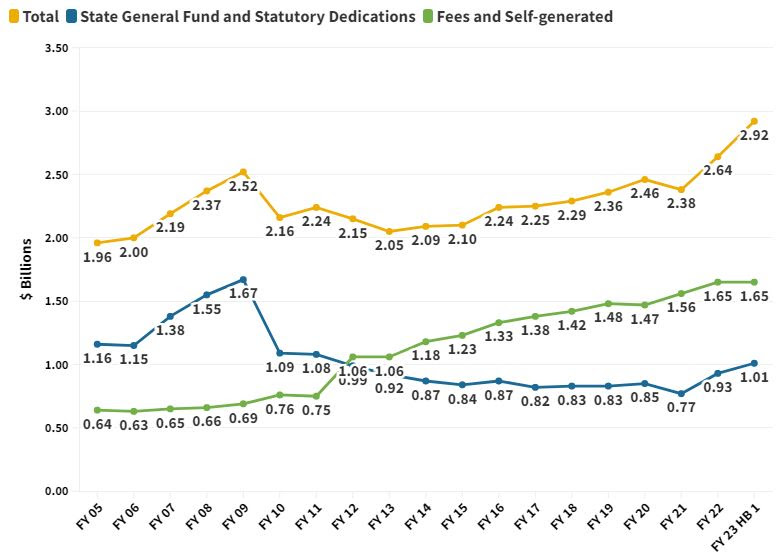 Louisiana students and their families are bearing more of the costs of attending college, after years of declining state financing for public universities and ballooning tuition costs. The state-financed TOPS free college tuition program is filling some of those gaps for families, but with certain schools and students benefitting more than others.

State contributions to public higher education steeply dropped during former Gov. Bobby Jindal’s administration, driving up tuition and fee charges from the colleges. Lawmakers and Gov. John Bel Edwards have boosted state financing for the schools in recent years, but those funding levels remain far below their historic highs.

The bulk of funding for higher education comes from tuition, fees and other sources of self-generated revenue. Over the last decade, state general fund spending on the four public college systems has fallen to less than 40% of their budget.

A nonpartisan legislative budget analysis shows 59% of Louisiana’s higher education budget in 2005 came from the state general fund, essentially from the general tax dollars that flow into the state treasury, while colleges’ self-generated revenue covered only 33% of their budget. That financing structure has reversed today, with the state general fund covering 35% of the higher education budget, compared to 56% from tuition, fees and other self-generated cash.

There’s one significant caveat: $331 million in state funding for TOPS that pays tuition costs for students who meet the program’s performance benchmarks is calculated as self-generated revenue for the colleges.

While the average annual cost of tuition and fees is nearly $9,000, some students don’t pay that full price tag. Nearly 55,000 students have their tuition covered by TOPS. The program doesn’t cover fees, but some students get a stipend in addition to the tuition payment, which can help cover some fees.

According to the Louisiana Office of Student Financial Assistance, TOPS covers 62% of the average tuition and fee charges of a student who receives the aid, or $5,416 per academic year.

But TOPS assistance isn’t equally spread across students or university systems. Students at LSU’s flagship campus in Baton Rouge receive one-third of all spending in the TOPS program. Students in the entire Southern University System, by comparison, receive only 1% of the money dispersed through TOPS. Students attending the nine campuses of the University of Louisiana System get about 50% of the program funding.

Louisiana also offers other financial assistance, such as need-based aid to students through the GO Grant Program. The program is set to distribute more than $55 million in grants during the current state budget year.

Comparing the charges from 2011 to 2021, LSU’s main campus saw the highest dollar increase, rising 87% or $5,368. While LSU carries the largest price tag, the University of Louisiana at Lafayette saw the greatest percentage change over the past ten years. UL-Lafayette’s tuition and fees more than doubled from $4,851 to $10,346, equivalent to a 113% increase.

Louisiana trails most of its Southern neighbors in public spending on higher education. Also, as the State Higher Education Executive Officers Association reports, Louisiana ranks 43rd nationally in appropriations and had one of the largest spending declines from 2008 to 2020, with a decrease of 37%.

However, the tides are starting to shift.

Louisiana was one of 41 states that increased its appropriations for colleges from 2019 to 2020, and the state has boosted financing again in the last two years. The above graph that shows Louisiana’s appropriation of $6,143 per full-time equivalent student (which includes TOPS and GO Grant funding) doesn’t account for the latest rounds of increases for higher education from the governor and lawmakers.