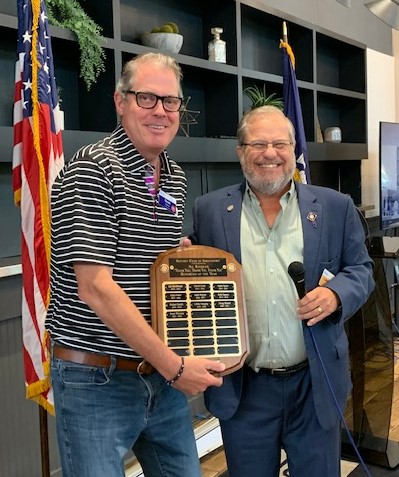 On Tuesday, September 6, 2021, Immediate Past President Lawrence Calhoun presented the Rotarian of the Year Award to Scott Wysong.

Scott is a native of Texas, who received his B.A. in Economics from Vanderbilt University and his MBA and Ph.D. in Marketing from the University of Texas-Arlington. He is the owner of a sports marketing company, Wysong Brand Solutions. He is also a professor of marketing and Academic Program Director for the Sports and Entertainment program at the University of Dallas. He joined the Rotary Club of Shreveport in 2012 and is a Paul Harris Fellow. He served as a Club Director in 2015 – 2016 and has chaired various fundraising efforts for several years. During the struggles of COVID-19, he developed fundraising events for the Rotary Club of Shreveport that made it possible for the club to complete their $125,000 commitment to the Common Ground, a local 501c3 nonprofit organization.

This award was initiated by then club president Larry Evensky during the 2012-2013 Rotary year to recognize a non-Board member who was very helpful to the president in fulfilling that year’s goals. The award is named in memory of a beloved club president who was instrumental in developing membership and in raising funds for The Rotary Foundation. Al Kessler always let Rotarians know they were appreciated with his “thank you, thank you, thank you.” This is a “traveling award” for the recipient to keep for a year and then it is exchanged for a framed certificate.