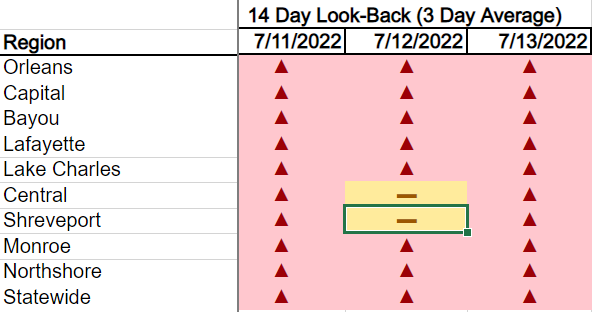 There has been a steady increase in cases of COVID-19 across Louisiana with more than 1,600 confirmed cases, hundreds of hospitalizations and more deaths.

The Louisiana Department of Health reported 1,611 confirmed cases out of 7,903 tests on July 13. The three-day positivity rate was 21.2%. There are approximately 13.98 patients in Louisiana hospitals with COVID-19 per 100,000 residents.

The report shows the number of new cases per 100,000 residents over a 14-day period, which is a method used by the state. By calculating the cases according to population in this way, the results from region to region are easier to compare to determine the severity of the outbreak.

The Public Affairs Research Council uses an average of new cases over a three-day period to smooth out irregularities that could be related to reporting inconsistencies (LDH also uses multiple-day averaging). Then, a statistically derived trendline – in the form of a straight line – is fitted to the data to gauge whether cases are increasing, decreasing or have reached a plateau, according to the CDC definition for each.

These figures are based only on known cases. Some studies indicate that the number of people who have carried COVID-19 is far greater than the number who have taken the test and shown a positive result. An unknown but potentially large number of people have been infected but are asymptomatic and have not been tested. Others have taken at-home tests, and their positive results haven’t necessarily been reported to the state.

Via the PAR Snapshot