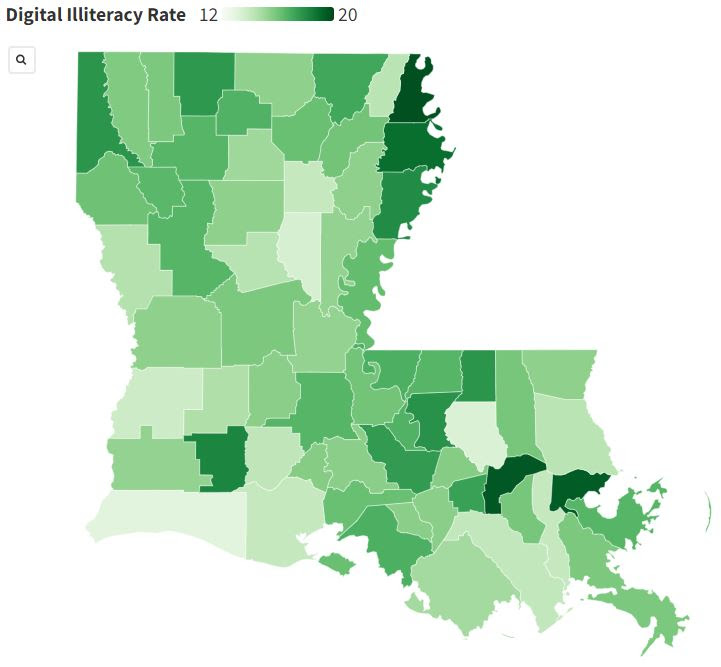 One in 10 Louisiana adults are considered digitally illiterate, meaning they are unable to find information through online platforms even as more commerce, news and entertainment require such technological skills to access.

An estimated 460,000 Louisiana adults aged 18 to 64 do not have basic computer skills, according to the Office of Broadband Development and Connectivity.

That’s roughly equivalent to the population of two cities the size of Baton Rouge, in the latest U.S. Census data.The American Library Association defines digital literacy as “the ability to use information and communication technologies to find, evaluate, create, and communicate information, requiring both cognitive and technical skills.”

The office of broadband development used a 2012 study by the Organization for Economic Cooperation and Development to present an estimated percentage of each parish’s population that lacked basic digital problem-solving skills. The darker the green color of a parish, the higher percentage of digitally illiterate residents.

The U.S. Department of Education’s Stats in Brief reports 16% of U.S. adults are not digitally literate, higher than Louisiana’s estimated 10% of adults.

But the two reports used different target populations. The broadband office’s internal analysis documented adults starting at age 18 while the U.S. Department of Education began its age range at 16. Both organizations used the same assessment by the Program for the International Assessment of Adult Competencies. The program gauged individuals digital problem-solving skills by their proficiency in configuring files, using menus and embedding hyperlinks.

Increasing the rate of digital literacy will broaden the scope of resources available to Louisiana residents. Video-calling, online delivery and other digital technologies have risen to prominence following the COVID-19 pandemic. A foundational knowledge of digital problem-solving is vital to stay up to speed in the online world.