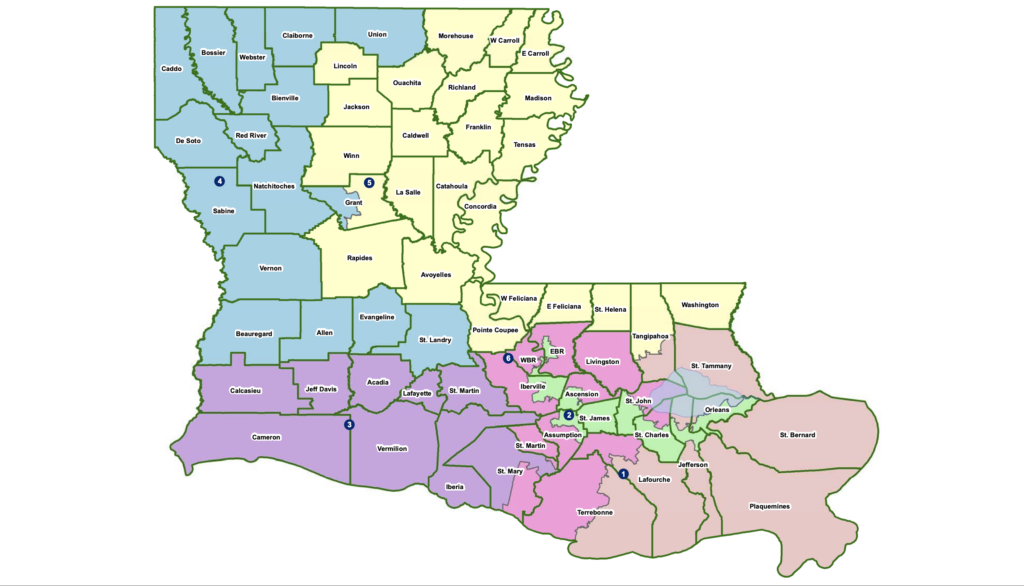 Surprising few, Louisiana’s latest redistricting session turned out to be a flop, more a tense reminder of the polarizing and partisan nature of the mapping work than a good-faith effort to comply with a federal judge’s order requiring new congressional boundary lines. Most legislators seemed to be engaged in theater, performing for judges or their constituents, rather than redesigning the districts.

Lawmakers didn’t meet the judge’s deadline to draw a new congressional map with a second majorityBlack district, ending the special session called by Gov. John Bel Edwards in a stalemate and leaving it to the judge to redesign the six U.S. House districts.

The House and Senate adjourned the session after a contentious four days, when it became clear they wouldn’t reach a consensus on a congressional district redesign and time was running out to meet U.S. District Judge Shelly Dick’s order.

Dick had given lawmakers until June 20 to rework Louisiana’s six congressional seats to add another majority-Black district, after she determined the map lawmakers passed in a February special session that maintained one majority-minority district violated the federal Voting Rights Act.

The legislative inaction means Dick intends to choose a congressional map containing two majority-Black districts that could govern elections for the next decade. She asked both sides in the case to propose a new map by June 22 and set a June 29 hearing date to discuss the proposals.

Meanwhile, Secretary of State Kyle Ardoin – who as Louisiana’s chief elections official is named the defendant in the lawsuit challenging the congressional districts passed by lawmakers – and the Republican legislative leadership are appealing Dick’s ruling. They are trying to stop a new map from taking effect for the upcoming fall elections while the lawsuit filed by civil rights organizations works its way through the court system.

States must redesign their political maps every decade with the release of new U.S. Census data, to account for population changes and equally distribute their residents among elected districts as required under federal and state laws.

Louisiana lawmakers held a nearly three-week special session in February to redraw their districts, including for the six U.S. House seats.

Black lawmakers, Edwards and civil rights groups argued the state needed two majority-minority congressional districts because more than 40% of Louisiana’s 4.6 million-plus residents identified as minorities in the latest census, including one-third who are Black.

But the majority-GOP Legislature instead largely maintained the status quo with its maps, rejecting efforts to add another majority-minority seat on the congressional map or any of the other maps passed. They kept the 2nd District seat, based in New Orleans and heading up the Mississippi River into Baton Rouge, as the only majority-minority district.

Republican legislative leaders argued that trying to create another majority-Black congressional district could dilute the Black population in the other majority-minority district and make it harder to elect a person of color to the U.S. House at all. They also said it would break up other communities of interest to reconfigure the districts.

Edwards vetoed the congressional map and described it as a violation of the Voting Rights Act, but the House and Senate overturned the Democratic governor’s veto in a March veto session, successfully getting the two-thirds vote required. It was the first override of a gubernatorial veto in nearly three decades. Republicans voted as a bloc to override the veto, along with three lawmakers without party affiliation and one Democrat.

After the veto override, Dick sided with the civil rights organizations and Black residents who filed the lawsuit challenging the U.S. House map and granted a preliminary injunction. In her ruling, Dick wrote that the plaintiffs were “substantially likely to prevail on the merits of their claims” and that allowing an election under the map passed by lawmakers would likely cause “irreparable harm” to the Black residents suing over the district configurations.

Dick told lawmakers to rework the districts and add a second majority-Black district by June 20. Edwards called a six-day special session for the task.

The U.S. Court of Appeals for the 5th Circuit refused to put a hold on Dick’s ruling while state officials appeal the decision. A three-judge panel of the appeals court said while the civil rights organizations’ arguments and Dick’s ruling were “not without weaknesses,” the secretary of state’s office and legislative leaders didn’t meet their burden of strongly showing “likely success on the merits.” But the appeals court did fast-track arguments in the case, in hopes of reaching a decision ahead of the July 20-22 candidate sign-up period for the fall elections.

Senate President Page Cortez and House Speaker Clay Schexnayder, both Republicans who defended the current congressional map as fair and legal, asked Dick for more time to work on a new map. But Dick refused, saying that Schexnayder appeared “disingenuous” and “insincere” in his efforts to redesign the districts.

During the latest special session, the House and Governmental Affairs Committee didn’t advance any map proposals, rejecting the two that came up for a vote in a near party-line divide.

After two days of hearings, the Senate and Governmental Affairs Committee narrowly allowed one map with a second majority-Black district to
reach the Senate floor for debate. That map by Republican Sen. Rick Ward – which would have heavily reworked most of the districts and turned the 6thDistrict into a majority-Black district – was sent to the full Senate “without action,” an indication that senators didn’t support the map but were trying to keep the debate alive while seeking possible compromise.

But senators couldn’t reach a deal, with Republicans repeatedly raising concerns about splitting communities of interest in each reconfiguration suggested. A day after the Senate committee advanced one bill, Ward acknowledged defeat and shelved his map. Shortly after that, the House and Senate ended the session.

Black lawmakers said they didn’t believe Republican lawmakers ever intended to adopt a new map. They noted that the GOP leadership repeatedly defended the congressional districts they passed, several Republicans said it was too soon to pass a new map while the litigation was ongoing and the House cut off the livestream video available to the public when members of the Legislative Black Caucus were on the House floor objecting to adjourning the session.

By failing to act, the Legislature put the fate of Louisiana’s congressional districts in the hands of the judiciary.

Black lawmakers said the civil rights organizations involved in the congressional district lawsuit will submit to the federal court a map offered by Democrats Sen. Cleo Fields and Rep. Royce Duplessis, which was rejected by both the House and Senate committees. That map would turn the northeast Louisiana-based 5th District into a second majority-Black district and make changes across the other districts to keep population evenly distributed.

The judge also asked the defendants to propose their own map with a second majority-Black district. Ardoin and Republican legislative leaders haven’t said what recommendation they will offer to Dick ahead of the June 29 hearing.

The U.S. Court of Appeals for the 5th Circuit has planned a July 8 hearing to review the case. Republicans hope that the appeals court will reverse Dick’s ruling.

Meanwhile, Attorney General Jeff Landry has asked the U.S. Supreme Court to get involved, to keep Dick from enacting new congressional
district boundary lines while the lawsuit and appeals continue over whether the current map complies with the Voting Rights Act. Landry’s office argued that switching out the district lines amid ongoing litigation “throws the election process into chaos, and creates confusion statewide.”

Depending on the outcome of the various legal hearings, this redistricting process could wrap up in time for the fall election or drag on for months, possibly years.