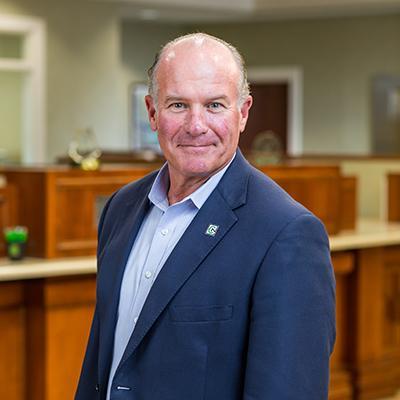 The Ruston-Lincoln Chamber of Commerce is pleased to announce that Bill Hogan has been chosen to receive the 2021 Robert E. Russ award.

The Robert E. Russ award recognizes one individual for outstanding contributions to the Ruston-Lincoln business community or overall economic development of the area, in honor of the founder of Ruston, Louisiana, Robert E. Russ.

There can be no finer individual to consider as the recipient for the 2022 Robert E. Russ Award than Bill Hogan. After returning to Ruston to work in his family’s business, in 1996 Bill began serving on the Board of Directors of Bank of Ruston, something that provided a springboard for him to hit his stride as a local businessman. In 2008, he became President of Bank of Ruston where he oversaw its growth into a regional powerhouse as Century Next Bank, currently serving as both President and CEO.

Bill supports the city, state, and region through service within a variety of professional and service organizations. A past Board member of the Ruston-Lincoln Chamber of Commerce, Dixie Center for the Arts, and The Health Hut, Bill is also a two-term Board member of the Ruston-Lincoln Convention and Visitors Bureau and past Chairman. He has served as a board member for United Way of Northeast Louisiana while serving as campaign Chair for 2002, 2011, and 2012, and heading up this year’s Lincoln/Union/Jackson Steamboat Society Campaign. In addition, he has been selected to the Class of 2022 Vestry for Ruston’s Episcopal Church of the Redeemer and will be responsible for running the business of the church parish.

Previously serving as Chairman of the Louisiana Tech University Innovation Fund as well as Past President of the Louisiana Tech University Foundation Board, Bill remains on both boards and also serves on the College of Business Dean’s Advisory Board. He was also tapped as the Commencement Speaker for Tech’s November 2013 graduation ceremony. In recognition of his unwavering support of and leadership for Louisiana Tech University, Bill was recently honored with the coveted Arlis Scogin Distinguished Service Award during Tech’s Homecoming festivities. His is the kind of optimistic leadership we have come to depend on and know will help direct our community in the years to come. With his “can do” attitude, growth mindset, and deep love for Ruston and Lincoln Parish, Bill Hogan’s legacy is worthy of replication and one to be honored.

The Robert E. Russ award is the highest honor given to an individual by the Ruston-Lincoln Chamber of Commerce. The award will be presented at the Chamber’s 102nd Annual Banquet on Jan. 25, 2022 at the Ruston Civic Center. Reservations can be made at www.rustonlincoln.org.