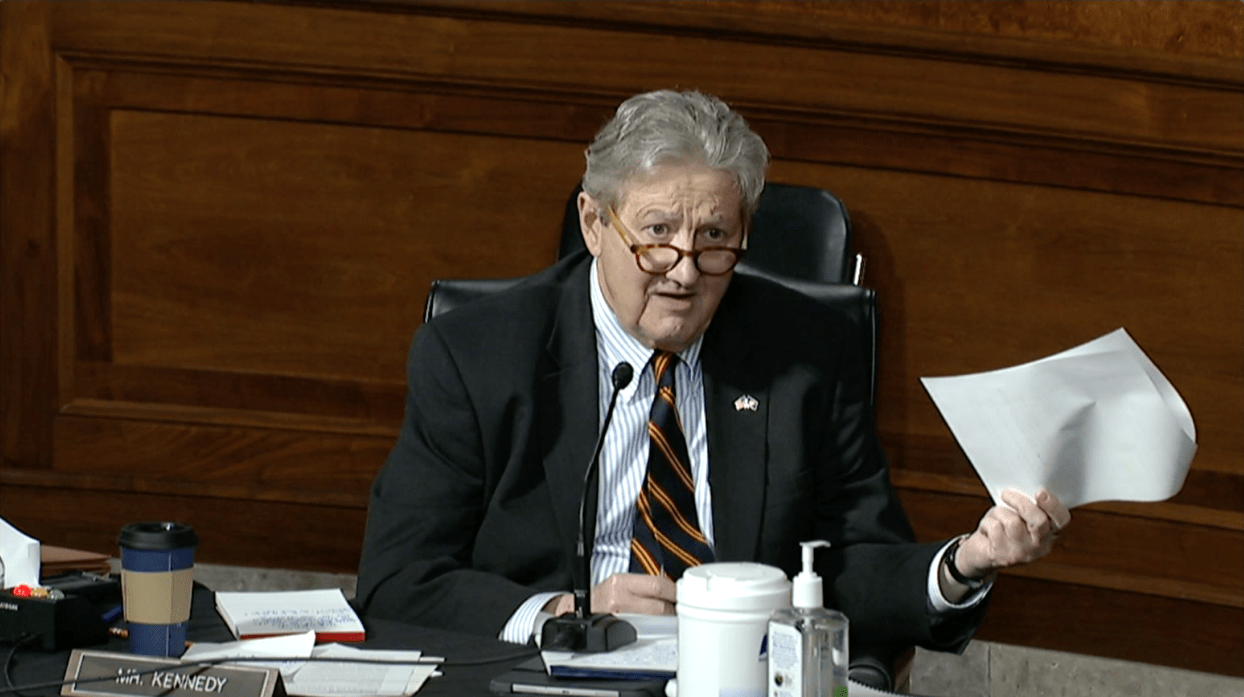 WASHINGTON—Sen. John Kennedy (R-La.) today asked U.S. Treasury Secretary Janet Yellen about the danger of increasing America’s debt through Democrats’ tax and spending bill and about how much debt is too much for the American economy to bear.Yellen’s assertion that the spending bill is paid for contradicts estimates from the Congressional Budget Office (CBO) and the University of Pennsylvania’s Penn Wharton budget model.

Key excerpts from the Senate Banking Committee hearing are below:

Kennedy: “I would be remiss if I didn’t point out that, in my opinion, there is no fair-minded person in the Milky Way who believes the infrastructure bill and the Build Back Better bill are not going to require the American people to incur substantial debt. And here’s my question, and I’m looking for a number: How much, in the Biden administration’s opinion, is too much debt? At what point, as you incur debt, will the Biden administration say, ‘Okay, that’s it. We can’t borrow any more, or it’s going to hurt the American people’?”

Yellen: “First of all, I want to say that I disagree with your assessment of Build Back Better. It is fully paid for or even more than fully paid for, and CBO just completed a comprehensive review of it, in which they found essentially the same thing. . . . we’re accustomed to looking at debt-to-GDP ratios. And using those kinds of metrics and looking around the world, many economists have found that debt-to-GDP ratios of 100 or more tend to be associated with significant problems.”

Kennedy: “I’m going to run out of time. Let me ask you this, Madam Chair, quickly. You gave a great speech back in September of 2019. . . . This is what you said—I’m going to quote. I thought this was such a wise statement. You said the former Fed Chair said she is not worried about the debt-to-gross-domestic-product ratio in the United States right now. But added, and I quote, ‘I’m worried about the trajectory of where it’s going. It’s not stable. We’re not living within our means right now. Debt is going to escalate, and that’s going to create problems down the road. . . .’ Now, that was when the debt was $17 trillion. It’s $29 trillion. You’re going to add trillions more through the Build Back Better. Why is that not true today?”

Yellen: “I want to repeat again, Build Back Better is fully paid for and will not add to the debt or to deficits. In fact, we plan to reduce it.”

Kennedy: “You and I just don’t agree on that.”

The Penn Wharton budget model estimates that the Build Back Better Act would increase government spending by $2.1 trillion and drive the U.S. deficit up by $274 billion. The model also predicts that the bill’s spending spree would decrease the U.S. GDP in the long term and that the bill’s real cost would be closer to $4.6 trillion if its temporary programs become permanent.

The Congressional Budget Office estimates an even greater deficit of $367 billion.

Video of the exchange is available here.