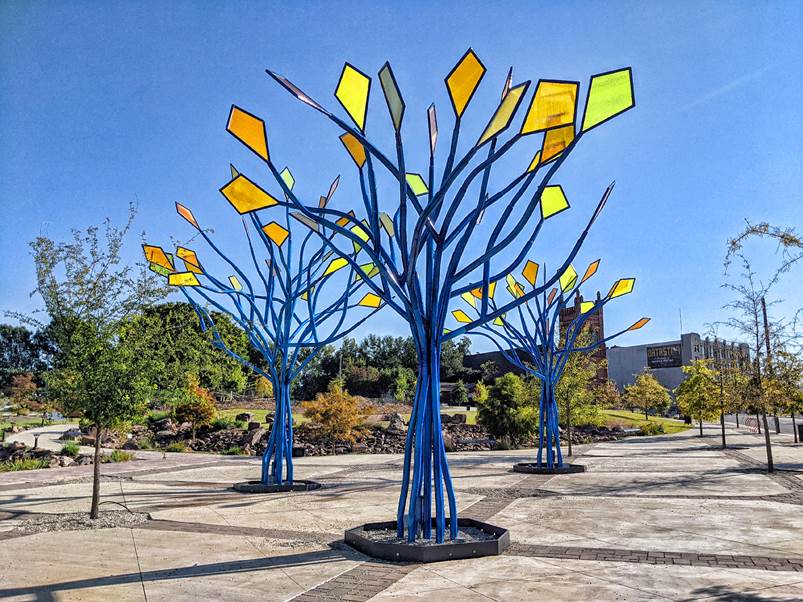 On Wednesday, Nov 10, at 5 p.m., a confetti celebration will announce the installation of three radiant, large-scale Artistrees in Caddo Common Park and the launch of the long-awaited Phase II completion of the new community greenspace located at the center of Shreveport Common at 869 Texas Ave. in downtown Shreveport.

The Artistrees, named “Diamonds for Jim,” were designed by artist team Bruce Allen and the late Jim Hayes after a year-long community process which gave neighbors “first voice” in the design of the park. In November 2020, Bruce Allen completed the final design of the trees and began offsite fabrication of the electric blue metal trunks and the yellow and amber, LED lit panel “leaves.” He installed the three Artistrees, two 20’ and one 25’ tall, this week in the park’s Art Bosque Food Truck Court.

Allen describes the design of the tree’s bases as having the feel of cypress trunks. He says the branches and panels were designed to create a canopy over the area where the table sets will go. The electric blue trunks have a shiny, almost reflective quality that was created by a combination of repeated grinding of the metal bases and working with Martin Specialty Coatings for a “candy coat“ finish, according to Allen. The sun creates a glow through the acrylic panels by day. At night the panels are LED lit.

“Caddo Common park is a vital part of the landscape of Downtown Shreveport,” says Mayor Adrian Perkins. “The enhancements at Shreveport Common and the installation of Artistrees provide opportunities to create new experiences for our citizens and visitors of Shreveport. I look forward to seeing even more great things in the future coming out of our Downtown Arts District.”

Caddo Parish Commissioner Steven Jackson says, “The ArtisTrees are another great creative placemaking addition to the Caddo Common Park. Their  character and a creative touch add to the unCommon transformation in the Shreveport Common neighborhood.”

Tracey Graham, Choice Neighborhood coordinator says that she is excited to see the Artistrees go up. “The art and programming in Caddo Common park enhance the area, creating a beautiful place for our neighbors to come and socialize,” she says.

Pam Atchison, executive director of Shreveport Regional Arts Council (SRAC) hopes everyone will come to experience the new addition to the park. “It’s UNexpected and Unimaginable,” she says. “Through Bruce’s fantastic artistry, the trees are as dramatic by day as they are at night, when the spectacular leaves glow brilliantly.”

Caddo Common park is at the epicenter of the nationally-awarded, creative placemaking revitalization of the 9-block area, according to Wendy Benscoter, executive director of Shreveport Common, Inc.

“This park is a very special place,” Benscoter says, “made possible because so many have come together to make it a reality. The public and private partnerships and the community involvement have been amazing.” She says it was important that the artists spent months listening to the community, especially the neighbors when designing the park. “The idea for the public art feature to be trees and even the choice of colors came from them. That’s Creative Placemaking at its best and there is more to come.”

Construction has begun on the Mike McSwain designed outdoor performance pavilion on the south side of the park and is expected to be completed within a year, along with a Mister Station and a mobile game kiosk with large-scale and tabletop games. SRAC will continue UNCOMMON Sundays in Caddo Common park. The next event is scheduled for Nov. 21, 2:00 pm – 6:00 pm.