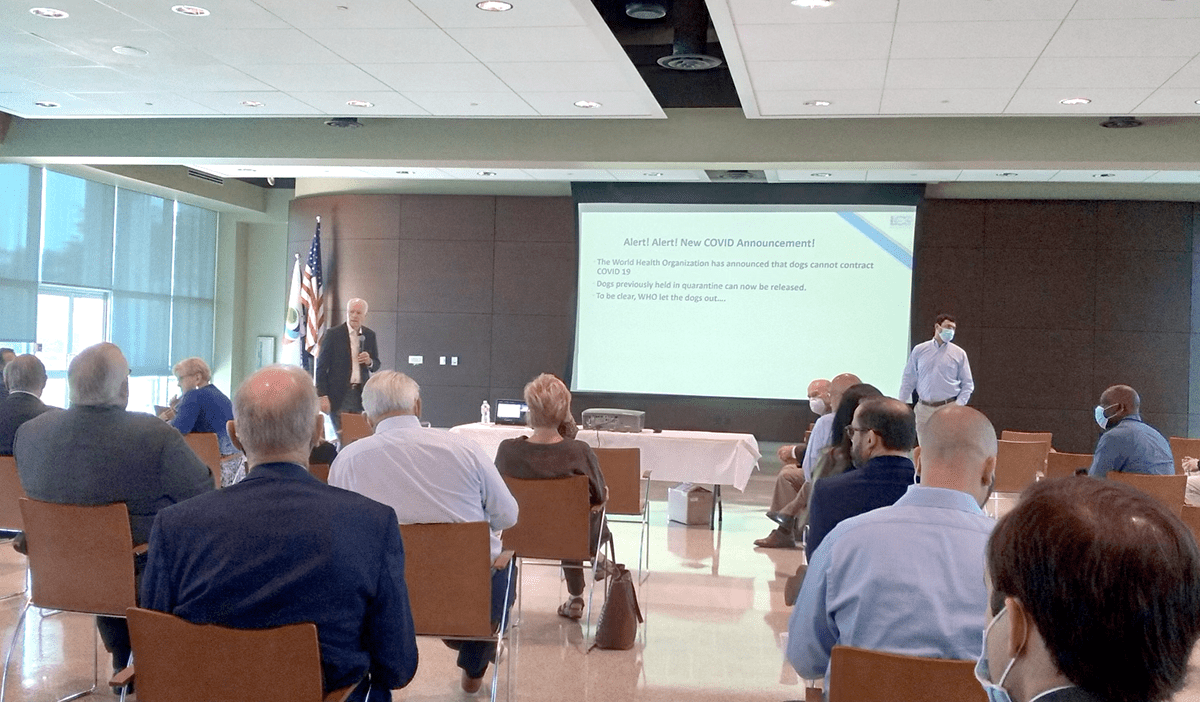 The Shreveport-Bossier area was heavily impacted by the COVID-19 pandemic, but it is making a strong recovery.

Economist Dr. Loren Scott presented an outlook on Louisiana’s economy during a stop Oct. 8 at the Regional Commerce Center at the Port of Caddo-Bossier. This outlook predicted what Shreveport-Bossier can expect to see over the next two years.

Like every other MSA (Metropolitan Statistical Area) in the state, the Shreveport-Bossier area, which is the fourth-largest MSA in Louisiana, was impacted heavily by the ongoing pandemic.

The region had 4,542 people employed in its six casinos and another 188 at the Harrah’s Racetrack before COVID hit. All those gaming venues were closed from mid-March to mid-May and then were only allowed to reopen initially at 25% capacity. The region’s smallest casino, DiamondJacks, closed permanently and attempts are underway to move that license to St. Tammany Parish.

Remarkably, by 2021-Q2 gross revenues had not only fully recovered but also had reached a new record for the MSA of $176 million.

“This recovery is due to the large stimulus checks that citizens received during this period,” Dr. Scott said.

In addition to jobs lost in the gaming sector, other major closures hit the Shreveport-Bossier MSA. Libbey Glass shuttered its 450-person plant in Shreveport, and Cleco Power shut down its Dolet Hills lignite mine and power plant, losing 243 jobs. Employment at Benteler Steel at the Port of Caddo Bossier fell from 395 to 240, and Western Global’s MRO unit at the Shreveport Airport shed 65 jobs, the report reads.

Dr. Scott then briefly discussed steady employment growth that has aided in our local economic recovery.

A serious growth engine for this Caddo, Bossier, DeSoto and Webster region recently has been the National Cyber Research Park in Bossier Parish. There are now 1,200 people working at the three units at the park.

GDIT is the largest player with about 1,100 high-wage jobs and another 300 at the call center on Benton Road.

Construction is underway on the $22 million Louisiana Tech Research Institute, which will start with about 200 employees when it initially opens in 2022, before growing to 500.

Dr. Scott went on to mention two projects that are currently being discussed about settling in the area.

“One is a potentially 600 to 1,000-job firm associated with the Air Force’s STRIKEWERX program. A second possibility, called Project X, is more secretive and could generate up to 2,000 new jobs,” he said.

Dr. Scott also noted that the National Cyber Research Park attracts 4,000-plus visitors per year. With the additional visitors coming to our area, they are spending their money in local restaurants, hotels, and other venues. Which in return, boosts the Shreveport-Bossier MSA’s economy.

Additional good news is that Shreveport-Bossier is projected to be on an expansion path over the next two years.

This projection is largely due to new job sources. One of those new job sources Dr. Scott highlighted is the future Amazon facility that is currently under construction in Shreveport.

The $200 million robotic center will be located in the Hunter Industrial Park and should open in the fall of 2022. It is projected that the new facility will bring 1,000 new job opportunities to the plant.

“Shreveport was so fortunate to land this, it could have landed in Ruston or Longview, fortunately it landed in Caddo Parish. We are talking about 1,000 new, direct jobs,” Dr. Scott said.

The other large job source is the Haynesville Shale.

Another job facility that is still a regional job economy booster for the area, is the Port of Caddo-Bossier. He noted there are 1,763 people employed at the various firms at the Port, which is only 500 jobs lower than the total civilian workforce at the huge Barksdale Air Force Base.

“One of the real bright lights in the Shreveport-Bossier economy over the past several years has been the Port of Caddo-Bossier. Looking forward, these units will still be adding jobs and capital expenditures to the region,” Dr. Scott said.

Additional jobs are projected from a number of other sources over the next two years.

The Ochsner-LSU Health Sciences Center was a major job contributor over the past two years and should continue over 2022-23. This is projected to add 240 new jobs over 2022-23 and spend some $25 million a year on capital projects, the report reads.

Lastly Honeywell is making an additional $75 million investment at its plant on Mooringsport Road, which will generate 15 new jobs, the report continued.