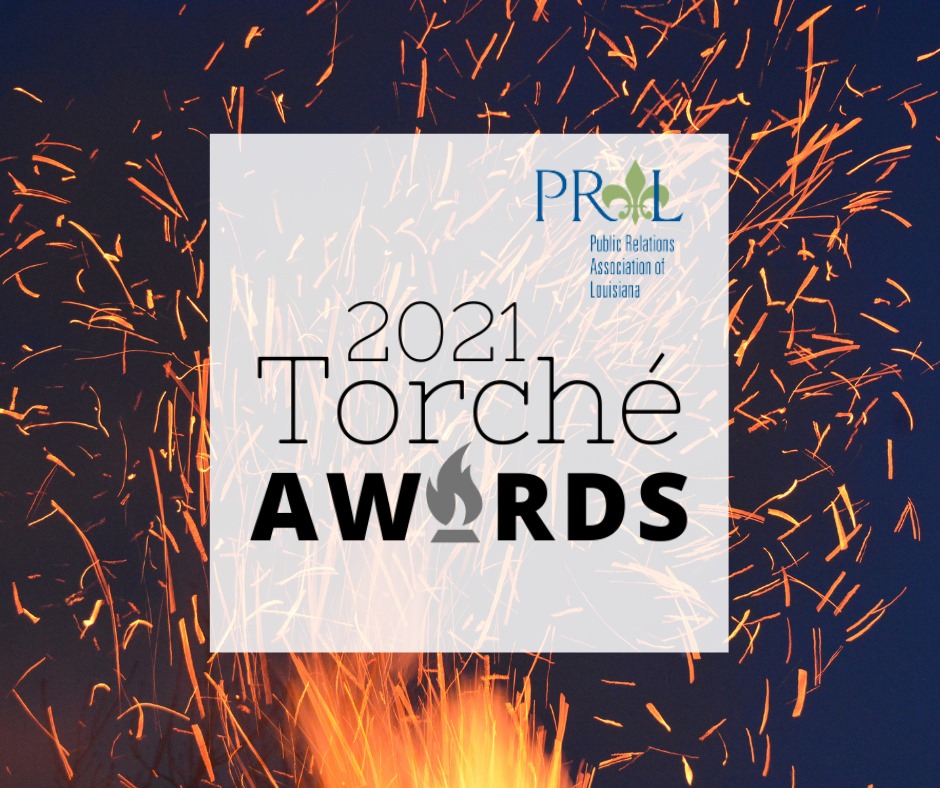 Crest Industries was recognized for its work for DIS-TRAN Packaged Substations on a long term internal communications campaign for the company’s purpose and core values.

Sarah Clancy, APR, won the Professional Achievement Award. She is a member of the PRAL Central chapter and is its vice president of programming. She also serves as PRAL State secretary.

Seven professional campaigns received the Award of Excellence, including two by Crest Industries. Crest won for its 2020 State of the Business long-term special events campaign and its COVID-19 long-term internal communications campaign.

Jennifer Phillips Nichols and Henrique Pimpão were honored in the short-term potpourri category for their visual concepts and designs on David Michael Williams’ political campaign for District 9 Judge, Division F.

Jason Furrate and Angela deGravelles of Media Furrate won for their audio and video project about parole, “Believe in Second Chances.”

Sarah C. LaBorde won a Student Award of Excellence for her LSU Stamps Scholars Cohort campaign on The Geaux Summit. She was advised by Sadie Wilks.

Kelsey Bohl, EdD., executive director of marketing and university communications at University of Louisiana Monroe, won four Awards of Merit. Her campaign “Responding to Crisis and Reputation Management: ULM Addresses Racism” was honored for short-term crisis communications, as was her work on Hurricane Laura and Hurricane Delta responses. She was recognized in short-term internal communications for her efforts surrounding the reopening of the campus after COVID-19. She also received an Award of Merit for writing on “45 Years of Study Abroad.”

The Torché Awards were created as a statewide initiative to recognize outstanding work in public relations. The awards celebrate the work of individual professionals, campaigns and students.

“The work submitted in the inaugural Torché Awards was well-done,” said Kelli West, PRAL Vice President of Student Services and Awards. “To create and execute such exemplary work during the pandemic is a testament to the public relations practitioners that exist in the state of Louisiana. The winners will now have the opportunity to use the judges’ comments and feedback to further craft the campaign for entry in the Southern Public Relations Federation Lantern Awards.”

“We are especially proud of our PRAL Northwest chapter members – Kelsey Bohl and Shalisa Roland – who were honored for their campaigns. Congratulations to them and all the award winners for being recognized for their outstanding work,” said Emerie Eck Gentry, PRAL Northwest President.

PRAL also awarded two scholarships during the virtual ceremony. Victoria Rocquin received the Jack H. Sanders Memorial Scholarship. Sanders was the first president of PRAL and a visionary in the profession of public relations. The scholarship is awarded annually to a Louisiana college junior, senior or graduate student who has demonstrated proficiency, excellence, and dedication to pursuing a public relations or journalism career.

Kennedi Smith received the William Michelet Scholarship. It is awarded annually to a student studying public relations who has demonstrated proficiency in the field of public relations with a strong commitment to community involvement. Michelet was an LSU professor, PRAL founder, and an accomplished public relations practitioner who believed in giving something back to the community through his profession.

PRAL is an affiliate of the Southern Public Relations Federation (SPRF), a 501(c)(6) not-for profit, tax-exempt, commercially oriented business league, and consists of a network of public relations professionals from Alabama, Louisiana, Mississippi, and North Florida. SPRF is led by a volunteer board of directors and is considered the premier professional development organization for public relations practitioners in the Gulf South region. Learn more about the Public Relations Association of Louisiana at PRALstate.org.