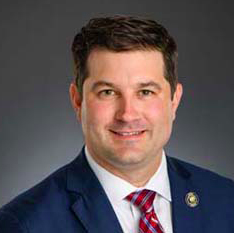 BATON ROUGE–Sen. Rick Ward, R-Port Allen, sat before the Senate Finance Committee Wednesday with tears in his eyes advocating a bill that he thinks could keep his loved ones from moving out of Louisiana.

After pulling out a large painting of his family to show his fellow representatives and choking on a few words, Ward said, “I know roads and infrastructure is not something to get emotional about, but that’s not the part I get emotional about. I don’t want to see them leave here. It’s time that we do something.”

The Senate Finance Committee passed the bill 7-4 Wednesday in a vote that also set off a lot of other emotions in the Legislature, especially from critics in both parties.

The controversy comes in that the bill, HB 514, would indefinitely extend a 0.45 percent sales tax that the Legislature passed in 2018 as a temporary stopgap to solve a budget crisis. The extension, which was tacked onto a marijuana tax bill late in the session, would keep that part of the sales tax from expiring in 2025 and dedicate the money from it to roads and bridges.

Ward repeatedly defended the bill as the most effective way to raise and commit state revenue to improving Louisiana’s infrastructure at a “four to one return on investment for construction dollars as we spend them.”

Ward said the bill tax would create $350 million per year directed only toward fixing roads and bridges.

If the Legislature kills the bill, the 0.45 percent sales tax would be lowered back down to 0.4 percent in 2025.

“Getting ahead of it is better than waking up in 2025 and realizing that we’ve got almost $400 million rolling off of our books and no way to figure it out,” Ward said. “I think it’s the fiscally responsible thing to do. I’m sure we won’t deal with it in 2023.”

But the bill faces an uphill battle with just over a week to go in the legislative session. The Louisiana Conservative Caucus released a statement opposing the extension of the sales tax at a time when federal COVID-19 relief aid is available to cover the state’s current needs.

The 41 members of the caucus represent more than a third of the House. They could kill the bill on their own since tax measures require approval of two-thirds of the members of both chambers.

Sen. Regina Barrow, D-Baton Rouge, was one of four opponents of the bill in the Senate committee Wednesday.

While Barrow acknowledged the hurdles of solving traffic and infrastructure problems throughout the state, and particularly in the Baton Rouge area, she believes there are bigger issues to confront with tax dollars first.

“Certainly, I believe in the importance of roads, but I never want to trump healthcare and education,” Barrow said.

Representatives of state organizations and companies also testified, including Jan Moller, executive director of the Louisiana Budget Project, who urged against the bill, and Tyler Gray of the Louisiana Mid-Continent Oil and Gas Association, who advocated for the bill’s passage.

HB514 includes a tax on raw, smokable cannabis if made available by Louisiana’s medical marijuana program in the future. Sen. J. Cameron Henry, R-Metairie, remarked that the committee completely “glossed over” the marijuana section of the bill.

“A great way to get a marijuana bill passed is to stick a tax bill on top of it and relate it to something else,” Henry said.

Referring to the highway provisions, Ward said: “There’s no bigger job creator. I’m just asking that we give this a chance. This is one step in the process. We’ve got to make a move. This is the most sensible thing to address our infrastructure needs.”