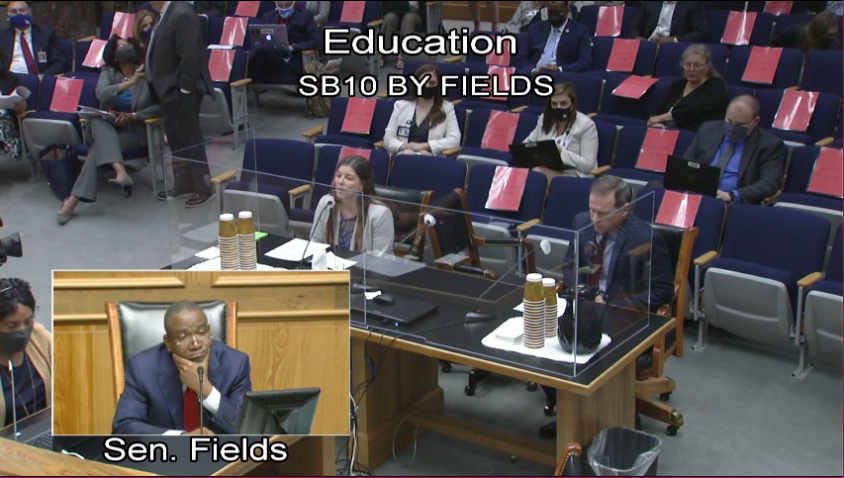 The Senate Education Committee voted 5-1 Wednesday to advance a bill that
requires mandatory kindergarten and school attendance for Louisiana children beginning at age
5.

“We have about 2,800 kids who do not attend kindergarten in the state of Louisiana,” Sen. Cleo
Fields, D-Baton Rouge, the author of the bill author and the committee’s chairman. “Early
childhood education is a necessity. A brain is developed most in the ages from birth to 5 years of
age and this bill will give us an opportunity to take advantage of that.”

Senate Bill 10 will require each city, parish and local school board to offer full-day kindergarten
instruction to any child who turns five before September 30 th of the calendar year in which the
school year begins. Children younger than 5 may enter kindergarten if they are evaluated and
identified as gifted by the Louisiana Department of Education.

Present law does not mandate kindergarten attendance, and a child in Louisiana is not required to
start attending school until age 7.

During the hearing, multiple amendments were added to the bill, including one stating that the
bill allows for home study programs or nonpublic schools not seeking state approval to qualify as
a kindergarten program under the law.

She stated that kindergarten gives children healthy meals and developmental screening beginning
at a younger age.

Sen. Beth Mizell, R-Franklinton, the Senate’s president pro tempore, disagreed with the bill on
the grounds that some children are not ready to attend kindergarten at the age of 5.
Jessie Leger, the director of legislative affairs for Homeschool Louisiana, also spoke in
opposition to the bill, citing the 2009 Louisiana children’s code, which states that is the parent’s
responsibility to decide the “educational, moral and ethical training of the child.”

“Just like children walk, talk, crawl and sit-up at different ages, children have a range of when
they learn how to read,” Leger said. “Some as early as 3 or 4 and some, like my middle child, not
until 9. Had he been in a classroom setting, he would have been told there is a deficiency with a
whole alphabet soup of diagnoses, but he just needed some more time.”

Sen. Katrina Jackson, D-Monroe, heartily advocated for the bill and responded to Leger by
stating that even children who may be immature would benefit from beginning school earlier and
receiving extra care in order to catch up with the other children their age.

“When an immature child that has not had some kind of intervention of formal education comes
into first grade, that first grade teacher is then graded based on that child’s performance,” said
Sen. Jackson. “But that teacher, principal and staff is obligated at that point to ensure that child
performs at the same level as a child who has availed himself to some type of formal education
in Pre-K 4 or kindergarten.”

Gov. John Bel Edwards’ office took to social media to support the bill, posting a graphic stating
the benefits of mandatory kindergarten. They include laying the foundation for reading, math and
science; developing children’s social-emotional skills; and creating greater success in elementary
school and beyond.

“This bill is vital for ensuring all of Louisiana’s children have the opportunity to thrive, and I am
proud to have it in my legislative agenda,” the caption on Edwards’ message said.
The bill next moves to the Senate floor for debate.