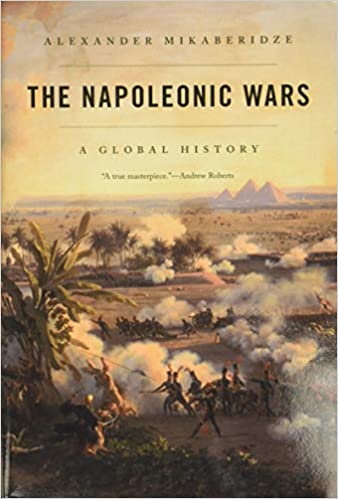 The Napoleonic Wars: A Global History, by LSU Shreveport History Professor Dr. Alexander Mikaberidze, was honored with the 2021 Distinguished Book Award for Non-American History by the Society for Military History (SMH) Distinguished Book Awards. Dr. Mikaberidze will officially receive the honor in a special presentation at the annual SMH meeting in May 2021 in Norfolk, Virginia.

The prestigious award also includes $1,000 prize for the author. SMH is one of the premier historical organizations uniting professional historians and devoted to stimulating and advancing the study of military history. Its membership of more than 2,700 includes many of the world’s most prominent scholars, soldiers, and citizens interested in military history.

“The Distinguished Book Award (DBA) is one of the top awards in the field of military history and being recognized by a jury of your peers is truly remarkable,” Mikaberidze said. “I did not expect to win because last year saw the publication of so many great works of military history. So, I am overjoyed and look forward to attending the SMH conference in May.”

The Napoleonic Wars: A Global History was published in February 2020 and is one of several books Mikaberidze has penned on the topic.

“I have been fascinated with the Napoleonic era since my early childhood,” Mikaberidze said. “As I got older, I decided to study it professionally, and over the past two decades I have written and edited almost two dozen books on this subject. I already felt that the existing literature was too focused on Napoleon and on events in Europe, so I knew that the Napoleonic Wars had ramifications far beyond the European borders and decided to write a book showcasing what a profound impact this period had on the world. It took me ten years to do it but it was well worth it.”

Readers can expect to find a fresh perspective on the Napoleonic era and its impact on national history. Mikaberidze argues that the Napoleonic Wars can only be fully understood from an international perspective. Taking specific regions in turn, he discusses major political-military events around the world and situates geopolitical decision-making within its long- and short-term contexts. The book narrates the global history of the period, one that expands the view of the Napoleonic Wars and their role in laying the foundations of the modern world.

“My hope is that the readers will gain a better appreciation of the scope of the war that we can call a ‘world war’”, Mikaberidze said. “In its scale, intensity and duration, this conflict dwarfed previous wars and remains one of the largest military endeavors in history. It shaped the history of not just Europe but North and South America, Middle East and Asia. Equally important, I think, is the broader lesson of breaking out of existing frameworks and casting a fresh look at existing historical narrative. This work is a call for more international and comparative approach to history.”

In addition to his service as a history professor, Mikaberidze also serves as the Ruth Herring Noel Endowed Chair for the Curatorship of the James Smith Noel Collection, one of the largest collections of antiquarian books and print in North America.