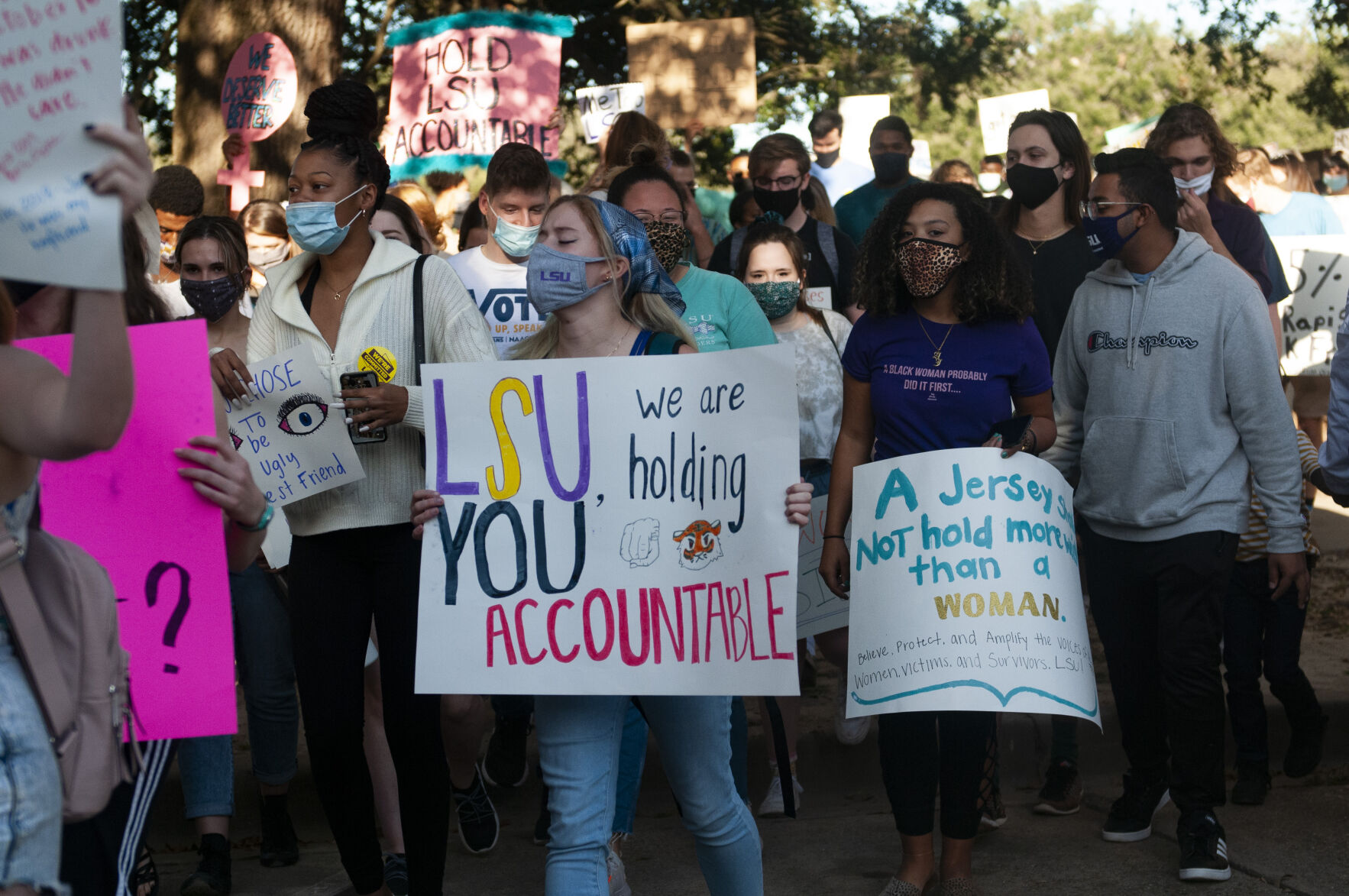 Scott Schneider, a representative from the law firm, Husch Blackwell, presented the investigation to the LSU Board of Supervisors.

Schneider said the university was understaffed and unequipped to handle complaints under Title IX, a federal law meant to reduce sexual harassment and assault on college campuses. The law firm’s 150-page report outlined summaries of the cases that it investigated, current Title IX policies at LSU and recommendations for changes.

“We’ve been forced to take a hard look, and let’s be perfectly clear, we don’t like what we see,” Galligan said.

According to WBRZ reporter Michael Cauble, Ausberry told him his entire career “has been dedicated to LSU,” and he regrets that his actions fell short of “protecting student interests.”

“I accept the conclusions and decisions rendered by the university and absolutely respect the commitment to putting the welfare of all students first,” Ausberry said.

Davis acknowledged in court in 2019 that he had punched the woman. He was expelled from LSU that July.

The USA Today report also detailed complaints about Darius Guice, a former star running back for LSU. They included an allegation that he had raped another female athlete. LSU took no action after that complaint.

Guice’s lawyer has denied the allegations. But Guice was released by the NFL team in Washington, D.C., after the USA Today report described these and other allegations against him.

The Husch Blackwell report does not recommend that anyone at LSU be fired. It advised university leadership to read the report and decide “what, if any discipline is warranted for employees.”

“If the leadership of the University decides to discipline employees, one of the important lessons from this review is that institutional policies and processes should be followed,” the report said. “In addition, those employees should be entitled to full due process protections, including the ability to say this review ‘got it wrong.’”

The report listed 18 recommendations for the university, including staffing the Title IX office appropriately, implementing targeted training for athletes and regularly measuring the climate and the effectiveness of the policies.

“We think it is critically important for the University to regularly measure whether these interventions are succeeding as well as the overall effectiveness of the University’s comprehensive Title IX program,” the report read.

The report recommended that “the rules must apply to everyone,” and said LSU needs to ensure that the Title IX policies and processes are followed and are applied to everyone.

Schneider said the most important recommendation is for appropriate staffing of the Title IX Office. He said the reporting line to the general counsel needs to “change immediately.”

Schneider said that one in four college-age female students experience some sort of sexual assault or sexual misconduct while they are undergraduate students. He said LSU is no exception to that.

One assault survivor and LSU alumna, Caroline Schroeder, spoke at the meeting and said she has personal experience with the Title IX process at LSU.

“I want to express how little faith I have in the board to make the right decision,” Schroeder said.

Schneider said the Husch Blackwell report was “clear” with LSU and highlighted that the university did not have a Title IX coordinator until 2014.

“From a historical perspective, LSU has been very slow to develop policies and infrastructure and personnel that was really required and highlighted starting in 2011 with the 2011 “Dear Colleague letter,” Schneider said, referring to a directive that the Obama administration sent to universities nationwide to improve their handling of assault claims.

“I’m embarrassed about what’s happened in the past,” LSU Athletics Director Scott Woodward said. “Getting it right is important. We want to review the past and accept the past, and get it right moving forward.”

Galligan apologized to the survivors and thanked those who came forward and spoke with Husch Blackwell.

“If they hadn’t come forward, we wouldn’t be here today,” Galligan said. “I’m grateful to them and with all my heart I apologize to them.”