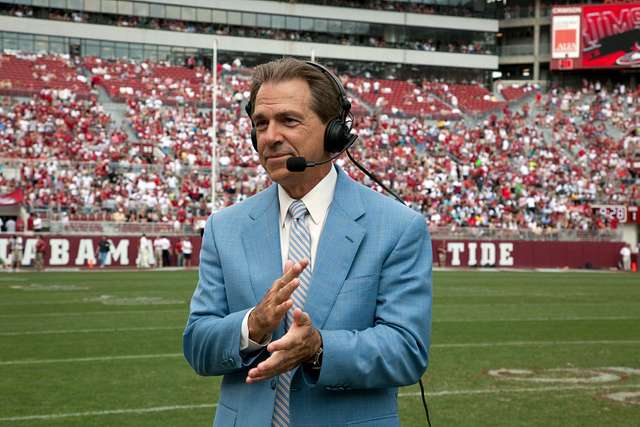 Including the one he garnered with LSU in the early 2000s, he’s surpassed Bear Bryant as the most decorated title coach in college football history.

Either way Monday night’s National Championship event was taken – tying Bryant, or surpassing him – viewers got to see a little piece of college football history.

Here in LSU Tiger country, it’s common for fans to absolutely loathe Saban. After that National Champioinship run with the Bayou Bengals, Saban said he was not going to leave the Red Stick – but he did, for the Dolphins. That stint didn’t last long, and Saban returned to the college ranks after the Athletic Director from Alabama literally camped outside his house for several days.

What he has created at Alabama is now historical, but let’s not forget Saban’s tenure at LSU is what changed the program from darlings with a chance for upset, to a group with expectations. Saban pushed for extra staff at LSU, new facilities, a bigger push for recruiting, a stronger alumni and booster relationship, and a bevy of other demands that suddenly made LSU a real contender.

Let’s also not forget that some (historically) poor decision making surrounding Drew Brees and his injury at Miami is what placed him squarely on the Saints roster… so in a roundabout way, Saints fans can thank him for that, too.

But what is fascinating is the continued hate thrown his way, and that attitude has become pervasive for the man who’s been very clear in several talks, recordings of which you can find anywhere online, wherein he gives up the whole plan – have an adaptive plan, find the right people to execute it, work hard, and stay disciplined.

Coach Ed Orgeron tried to drop out of the adaptive plan business, and 2020 happened.

(Yes, COVID had something to do with it, but hiring ‘safe’ bet guys didn’t pan out well)

Now, in 2021, he’s looking to go back to the adaptive plan by hiring young guys, highly recommended. Probably much to Orgeron’s chagrin, but it’s the way things work now, risks must be taken to keep up with an ever-changing landscape.

And yet people will still try to hate on the man, and for what? In the grand scheme of ‘earning’ something, Saban has earned the right of praise (not the religious kind, just an understanding that he’s one of the best to ever do it.)

And, just like successful people in business and politics, he’s laid the blueprint out for everyone to see. And, yet, people don’t follow it, instead opting for other means of acquiring their goals which are, often, unsuccessful.

Why? Because it’s easy.

It’s easier to just say ‘screw Nick Saban! He cheats!’ than it is to say ‘we need to take time to build a culture here.’ Look at what Clemson accomplished, Ohio State, et. al. These schools continually show up because, like Alabama, they have the culture for it.

LSU, on the other hand, had to pull together some of the best pieces in the country at any given point to make their title run occur, and then – when the dust settled after everyone left – they eeked out a 5-5 season.

Sure, as T-Bob Hebert will say, it’s entertaining to watch the darlings upset people from time-to-time and watch the up-and-down nature of the program.

The problem is, however, that football is a source of entertainment above all else. And what we teach these young men is that not following the mantra placed down by Saban and other successful coaches can be successful, sometimes?

What that brings is a complete lack of personal responsibility. Instead of seeking improvement, it’s easier to just hate on the person next to you, or constantly blame others for your problems, than to work on improvement of yourself, and it hampers personal ability to work with others.

If it sounds familiar, it’s represented in the business and political marketplace. Take federal representatives, for example, and understand why fringe politics have become so popular. They’re the loudest, blame the other side, and have wild ideas on how to fix everything ‘right now.’

Small businesses and entrepreneurs are so focusued on making ‘the dollar, right now’ that they miss out on future rewards because of a lack of an adaptive plan and no discipline.

In both instances, the Saban method would provide a more stable course for the future, but without discipline no one’s willing to consider an approach that would take collaboration between both sides, and time.

All that to say, do I hate Alabama’s guts when they play LSU every year? Sure. But I saw history Monday night, and I’m a better person for it – because with an adaptive plan, the right people to execute it, hard work, and discipline, there may not be victory every time, but things will be steady, and most times you’ll be at the top.

McHugh David is publisher of the Livingston Parish News.