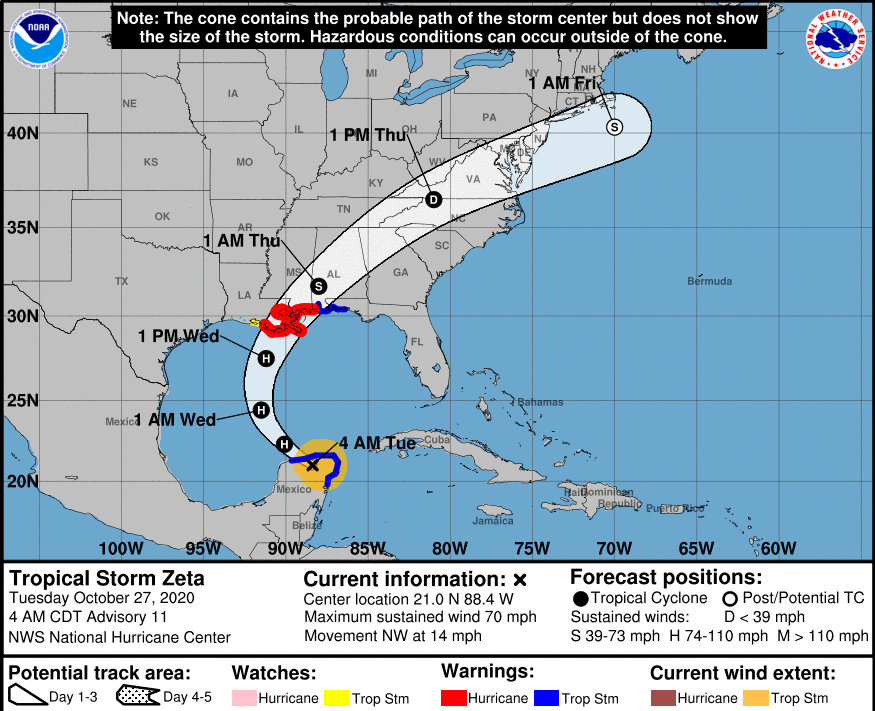 NEW ORLEANS (AP) — Zeta sped across the Southeast on Thursday, leaving a trail of damage and more than 2 million homes and businesses in the dark in Atlanta and beyond after pounding New Orleans with winds and water that splintered homes and were blamed for at least three deaths.

A Category 2 hurricane when it hit the southeastern Louisiana coast Wednesday, the storm was still a tropical storm Thursday morning with maximum sustained winds of 60 mph (95 kph) about 50 miles (80 kilometers) west of Asheville, North Carolina — unusual even in a region accustomed to hurricanes and their aftermath.

Hundreds of schools canceled classes or planned to open late across from the Gulf Coast to the Carolinas.

The latest punch from a record hurricane season left people shaken. Will Arute said it sounded like a bomb went off when part of a large oak snapped outside his home in New Orleans, and part of the tree crashed into his car and a corner of his home.

“I did not anticipate this to happen. It was pretty intense along the eye wall when it went through here,” he said.

Mackenzie Umanzor did not prepare much because the last hurricane to threaten her home a few weeks ago in D’Iberville, Mississippi, did not do much. Zeta blew open doors that she had tried to barricade, leaving her with a cut hand, and the top of her shed came loose.

“You could hear the tin roof waving in the wind and the stronger the wind got. It was just rattling. And there was a couple of snaps, lots of cracks of branches and trees falling,” she said. “It was pretty scary.”

Officials said life-threatening conditions would last into the day, with Zeta crossing the mid-Atlantic states as a tropical storm before moving offshore around Delaware and southern New Jersey.

Leslie Richardson, 58, drowned after being trapped in rising seawater in Biloxi, Mississippi, after taking video of the raging storm, Harrison County Brian Switzer said. Richardson and another man exited a floating car and desperately clung to a tree before his strength “just gave out,” Switzer said.

In Louisiana, a 55-year-old man was electrocuted by a downed power line in New Orleans, a coroner said. In Georgia, authorities said a man was killed when high winds caused a tree to fall onto a mobile home in Cherokee County.

Power outages were reported across Louisiana, Mississippi, Alabama and Georgia, according to the website PowerOutage.us. Georgia had the most outages before dawn with more than 1 million customers in the dark.

Morning rush hour happened as usual in Atlanta, but commuters had to dodge downed trees and navigate their way past signals with no power. Trees blocked Interstate 985 near Buford in the far northeastern suburbs, as well as some lane of Interstate 20 near downtown, the Georgia Department of Transportation said.

The storm raged onshore Wednesday afternoon in the small village of Cocodrie in Louisiana as a strong Category 2 and then moved swiftly across the New Orleans area and into neighboring Mississippi, bringing with it both fierce winds and storm surge. The morning after in New Orleans’ French Quarter, the wind was blowing lightly as a few people walked to work and some residents swept leaves in front of their houses.

Waveland Mayor Mike Smith told WLOX-TV that his Mississippi Gulf Coast city, which was part of the area most heavily damaged by 2005’s Hurricane Katrina, had taken what might be the worst hit since then from Zeta.

“We’re going to see a whole lot of damage in the morning,” Smith said. Among the many trees blown down was one that fell on Smith’s own house. “It was my next-door neighbor’s and he wanted to give it to me, apparently,” Smith said.

In Louisiana, Gov. John Bel Edwards was expected Thursday to tour the coastal regions hardest hit by the storm. And as neighbors and church groups started reaching out to help those affected, he also highlighted the need to protect against the coronavirus at the same time.

“Offer the help but do it with a mask on,” he said.

Zeta left much of New Orleans and the surrounding area was without power as 200 falling trees and more limbs pulled down utility lines. Signs outside bars and restaurants swayed back and forth in the wind and palm trees along Canal Street whipped furiously as the storm passed.

Echoing a plea made by officials across the Gulf Coast in the dark hours after the storm passed, New Orleans Mayor LaToya Cantrell implored residents to stay home and let city officials assess the damage.

Along coastal Louisiana, there were reports of some trailers flipped over, a gas station destroyed, and downed power lines and trees.

Zeta had top sustained winds of 110 mph (177 kph) as a Category 2 hurricane at landfall and is the 27th named storm of a historically busy Atlantic hurricane season — with over a month left to go. It set a new record as the 11th named storm to make landfall in the continental U.S. in a single season, well beyond the nine storms that hit in 1916.

As much as 5 feet of Gulf water surrounded a casino in Biloxi, Mississippi, and deputies in Harrison County, Mississippi, received multiple calls from people who had remained in mobile homes that were threatened by winds.

In the small coastal town of Bay St. Louis in Mississippi, former mayor Les Fillingame said the storm was “very intense” when it blew through.

“It was a noisy storm. It was a truly howling wind,” he said, but said thankfully it was also fast-moving. “It was a lot of wind for several hours which is enough.”

On Tuesday, Zeta raked across Mexico’s Yucatan Peninsula, toppling trees and briefly cutting power to more than 300,000 people but causing no deaths.

It then regained strength over the Gulf of Mexico along a path slightly to the east of those of Hurricane Laura, which was blamed for at least 27 deaths in Louisiana in August, and Hurricane Delta, which exacerbated Laura’s damage in the same area weeks later.

The deteriorating weather prompted early voting sites to close for hours in the western Florida Panhandle. One voter in Mississippi worried about how long felled trees and debris might block roads.

Thursday was the last day to request an absentee ballot or vote by absentee in person in Alabama, and power was out across parts of the state including heavily populated Mobile on the coast. Mobile County tweeted that the absentee voting office still would be open for normal business hours, but other county offices would be closed.