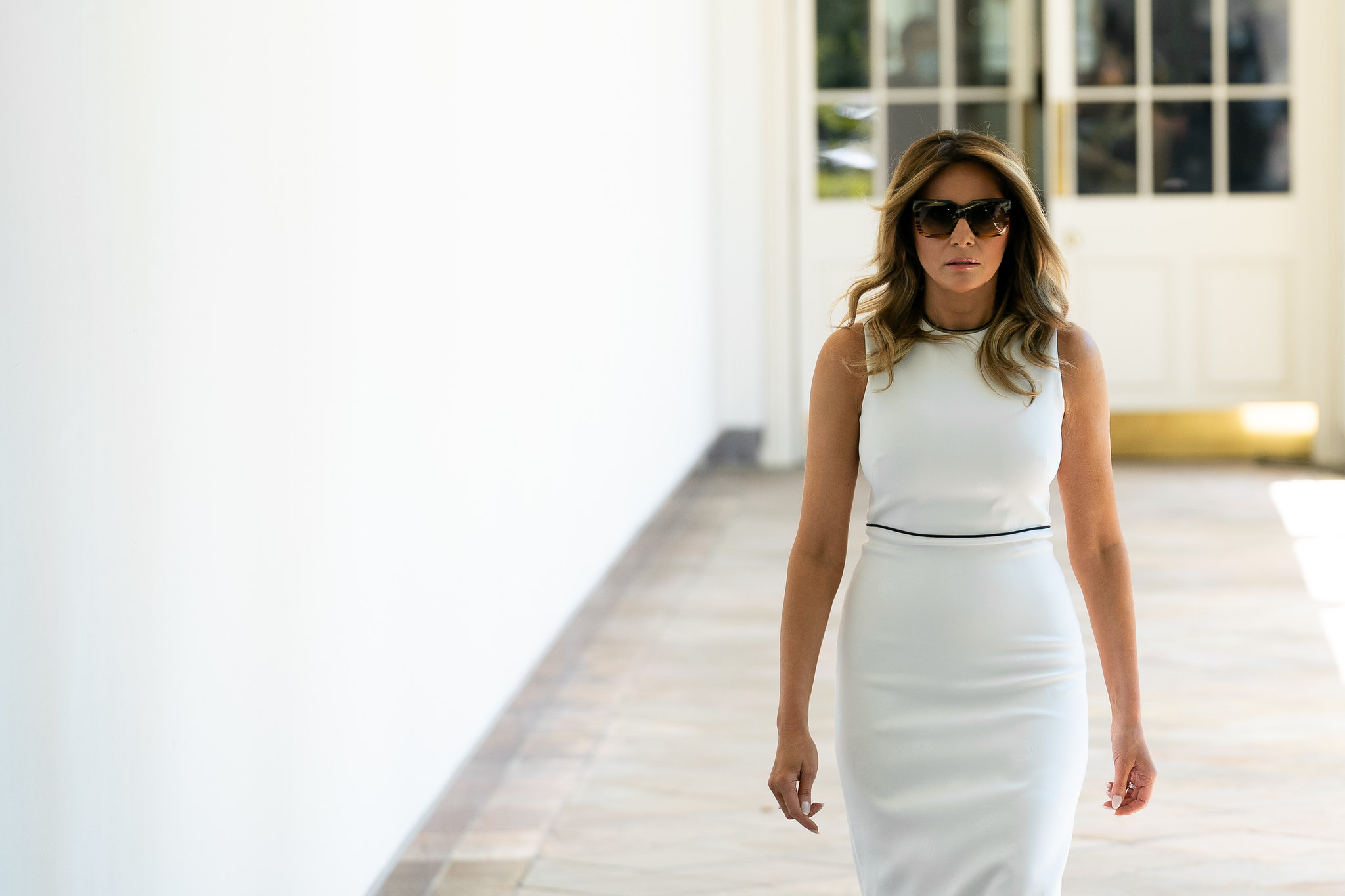 WASHINGTON (AP) — First lady Melania Trump portrayed her husband as an authentic, uncompromising leader in a Rose Garden address as President Donald Trump turned to family, farmers and the trappings of the presidency to boost his reelection chances on the second night of the scaled-down Republican National Convention.

Mrs. Trump offered a polished portrait of Trump’s presidency Tuesday night that was often at odds with the crises, division and unforgiving actions of his administration.

But it was part of a broader effort to show a more forgiving side of a combative president who will soon face the voters. Beyond the first lady’s remarks, Trump pardoned a reformed felon and oversaw a naturalization ceremony for several immigrants in the midst of the program, though he frequently states his vigorous opposition to more immigration, legal as well as illegal.

“In my husband, you have a president who will not stop fighting for you and your families,” said Mrs. Trump, an immigrant herself. “He will not give up.”

Mrs. Trump and two of the president’s five children led a diverse collection of supporters, including a convicted bank robber, calling for Trump’s reelection on a night that featured a distinctly more positive tone than the night before.

Trump has ground to make up. Most polls report that Democratic rival Biden has a significant advantage in terms of raw support; the former vice president also leads on character issues such as trustworthiness and likability. That makes character assessments such as the one Mrs. Trump provided on Tuesday important if the president hopes to win back voters — particularly women — who have strayed amid the pandemic, economic collapse and a reckoning on racism.

In a particularly emotional moment, Trump showed a video of himself signing a pardon for Jon Ponder, a man from Nevada who has founded an organization that helps prisoners reintegrate into society.

“We live in a nation of second chances,” Ponder said, standing alongside Trump.

“Jon’s life is a beautiful testament to the power of redemption,” Trump said before he signed the pardon.

The lineup also had a Maine lobsterman, a Wisconsin farmer and a Native American leader. Social conservatives were represented by an anti-abortion activist and Billy Graham’s granddaughter. The convention also featured a Kentucky high school student whose interaction last year with Native Americans became a flashpoint in the nation’s culture wars.

With Election Day just 10 weeks off and early voting beginning much sooner, Trump is under increasing pressure to reshape the contours of the campaign. But as he struggles to contain the pandemic and the related economic devastation, Republicans have yet to identify a consistent political message arguing for his reelection.

Mrs. Trump noted that the lives of Americans changed “drastically” in March with the onset of the coronavirus. But other speakers made little mention of the pandemic even as it remains a dominant issue for voters.

The COVID-19 death toll surged past 178,000 on Tuesday, by far the highest in the world, and there is no sign of slowing. The nation’s unemployment rate still exceeds 10%, which is higher than it was during the Great Recession. And more than 100,000 businesses are feared closed forever.

At the same time, the White House seems to have abandoned efforts to negotiate another federal rescue package with Congress.

There were fierce attacks on Biden throughout the night, although the lineup generally maintained a positive tone — in part due to some last-minute changes.

Mary Ann Mendoza, an Arizona woman whose son, a police officer, was killed in 2014 in a car accident involving an immigrant in the country illegally, was pulled from the program minutes before the event began. She had directed her Twitter followers to a series of anti-Semitic, conspiratorial messages.

And the convention featured a Democrat for the second night: Robert Vlaisavljevich, the mayor of Eveleth, Minnesota, who praised Trump’s support for his state’s mining industry in particular.

“President Trump is fighting for all of us. He delivered the best economy in our history and he will do it again,” Vlaisavljevich said.

Secretary of State Mike Pompeo addressed the convention and the nation during an official overseas trip in Israel.

“President Trump has put his America First vision into action,” Pompeo said. “It may not have made him popular in every foreign capital, but it’s worked.”

Pompeo’s taped appearance broke with decades of tradition of secretaries of state avoiding the appearance of involving themselves in domestic politics. That his video was filmed in Jerusalem, where he was on an official foreign trip, raised additional questions of propriety.

Still Mrs. Trump was the intended star of the night.

Out of the public view for much of the year, she stepped into the spotlight while avoiding the missteps that marred her introduction to the nation four years ago.

At her 2016 convention speech, she included passages similar to what former first lady Michelle Obama had said in her first convention speech. A speechwriter for the Trump Organization later took the blame.

Only the second foreign-born first lady in U.S. history, Mrs. Trump, 50, is a native of Slovenia, a former communist country in eastern Europe. She became Trump’s third wife in 2005 and gave birth to their now 14-year-old son, Barron, in 2006 — the year she became a naturalized U.S. citizen.

The first lady spoke from the renovated Rose Garden, despite questions about using the White House for a political convention. She addressed an in-person group of around 50 people, including her husband.

“Whether you like it or not, you always know what he’s thinking. And that is because he’s an authentic person who loves this country and its people and wants to continue to make it better,” Mrs. Trump said. “He wants nothing more than for this country to prosper and he doesn’t waste time playing politics.”

Louisiana one of states with lowest senior prescription drug costs