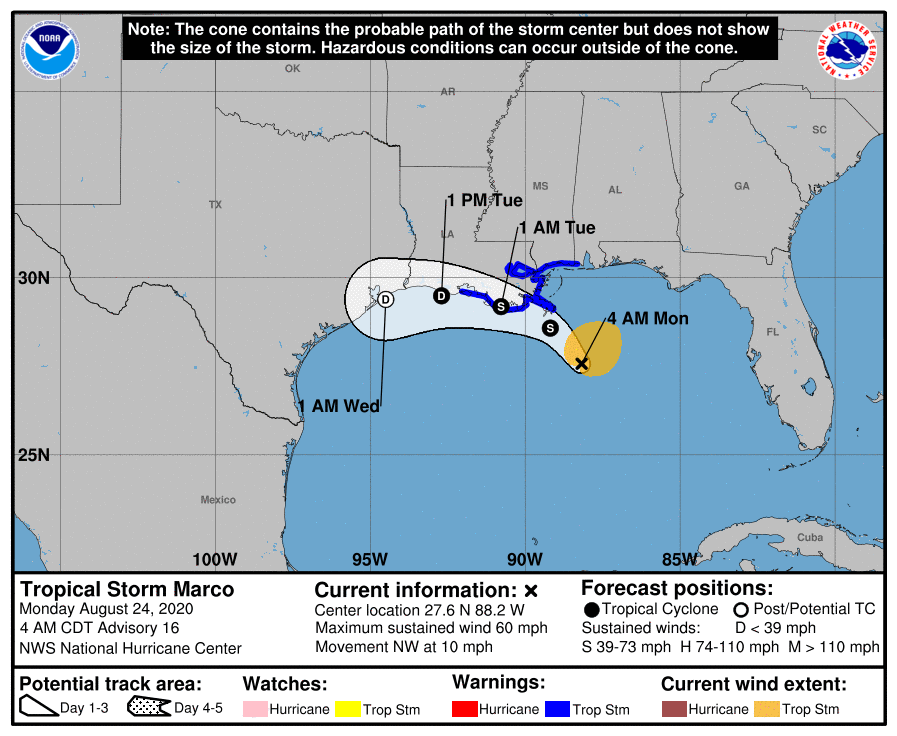 “We’re gonna get basically a right hook from Marco and a left hook from Laura,” Edwards said.

Marco is expected to bring heavy rain Sunday night into Tuesday. Minor to moderate coastal flooding and gusts of damaging winds, including possible tornadoes, are predicted.

Some of the heavy rain from Laura may fall in areas where the ground already is soaked from Marco, which increases the chances of flooding and trees getting knocked down. Heavy rain, major coastal flooding and damaging wind all are expected from Laura, forecasters say.

Louisiana might have only a 12-to-18-hour window between storms, which will make search and rescue more difficult if necessary. Mandatory evacuations have been ordered for parts of Plaquemines, Lafourche and Jefferson parishes.

Residents who need help evacuating are urged to call their local emergency preparedness officials. Contact information is available at GetaGamePlan.org.

Benjamin Schott of the National Weather Service said two hurricanes have never hit the same state within 48 hours of each other in modern meteorological history, calling the situation “remarkably odd.”

Edwards said Louisiana is more prepared now for a category three storm than in years past because of improvements to the state’s storm protection systems.

“I never want to say that we know that we’re 100 percent ready because we never know what Mother Nature is going to throw at us,” he said.

Edwards urged residents who evacuate to remember to bring hand sanitizer and face coverings and try to maintain distance between themselves and others who are not part of their households.

“The virus is not concerned that we have hurricanes coming,” he said.

At 4 p.m. Sunday, Marco was about 240 miles south-southeast of the mouth of the Mississippi River with sustained winds of 75 miles per hour, the National Hurricane Center said in its most recent update as of publication. A hurricane warning was in effect from Morgan City to the mouth of the Pearl River.

At the same time, Tropical Storm Laura was about 50 miles south of Guantanamo, Cuba, with sustained winds of 60 miles per hour.