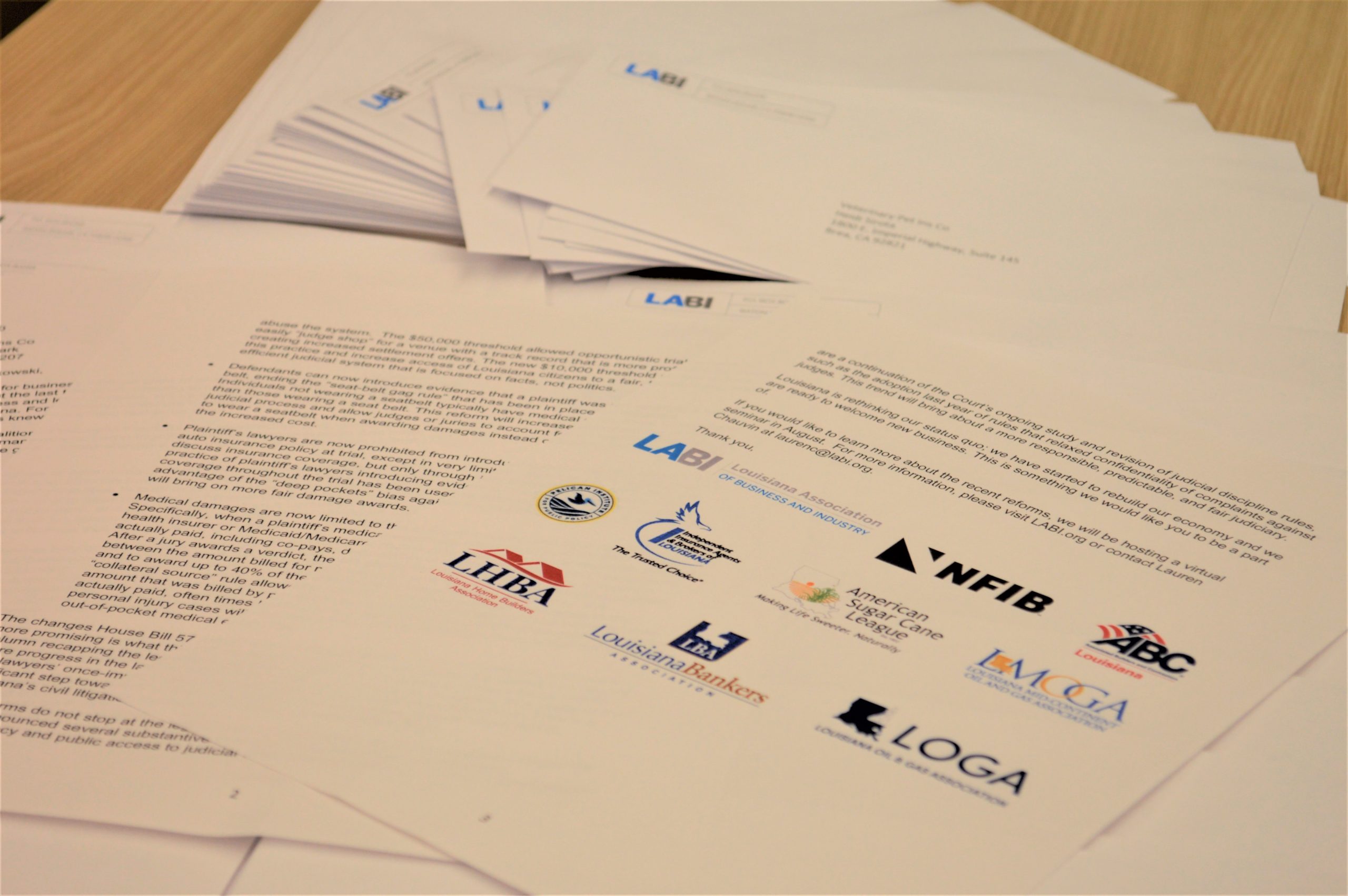 This week, the Louisiana Association of Business and Industry (LABI) and their Legal Reform Coalition partners sent more than 1,100 letters to auto insurance companies who currently do not operate in Louisiana, marketing the potential of bringing business back to the state after the passage of meaningful legal reform legislation during the first special session of 2020.

“Louisiana is open for business, and we want to invite you back,” the letter states. “Our Legal Reform Coalition has spent the last two years working to bring real changes to the state that will improve our business and legal climates. We invite you to take a fresh look at doing business in Louisiana. For decades, Louisiana has been a poster child for lawsuit abuse. Louisianians knew something had to be done.”

The message goes to describe the substantive changes that were made to Louisiana’s civil justice system by HB 57, the landmark legal reform bill authored by Speaker Clay Schexnayder (R-Gonzales). The measure, which passed in both chambers with an overwhelming majority, was signed into law by Gov. John Bel Edwards (D-Amite) at the conclusion of the special session.

“During the recent sessions, we saw a broad, bipartisan group of our members come together in support of passing these substantive reforms to bring our legal system more in line with the rest of the country,” remarked Speaker Schexnayder and Senate President Page Cortez (R-Lafayette). “It’s far past time to rebuild a competitive auto insurance marketplace for our citizens, and we’re proud to be a part of this effort to show the nation that Louisiana is once again open for businesses.”

In addition to explaining HB 57 in detail, the letter itself also touches on recent changes made to make Louisiana’s judiciary more transparent and the continuing push to make the court system more fair, honest, and efficient.

The letter concludes, “Louisiana is rethinking our status quo; we have started to rebuild our economy and we are ready to welcome new business. This is something we would like you to be a part of.”

“This initiative is designed to help recruit more auto insurers to come to Louisiana and give our drivers lower rates through a competitive market,” said LABI President and CEO Stephen Waguespack. “We encourage other stakeholders, such as elected officials, the Louisiana Department of Insurance and Louisiana Economic Development to join us in this work to bring both more business to our state and real financial relief to our working families and job creators in this struggling economy.”