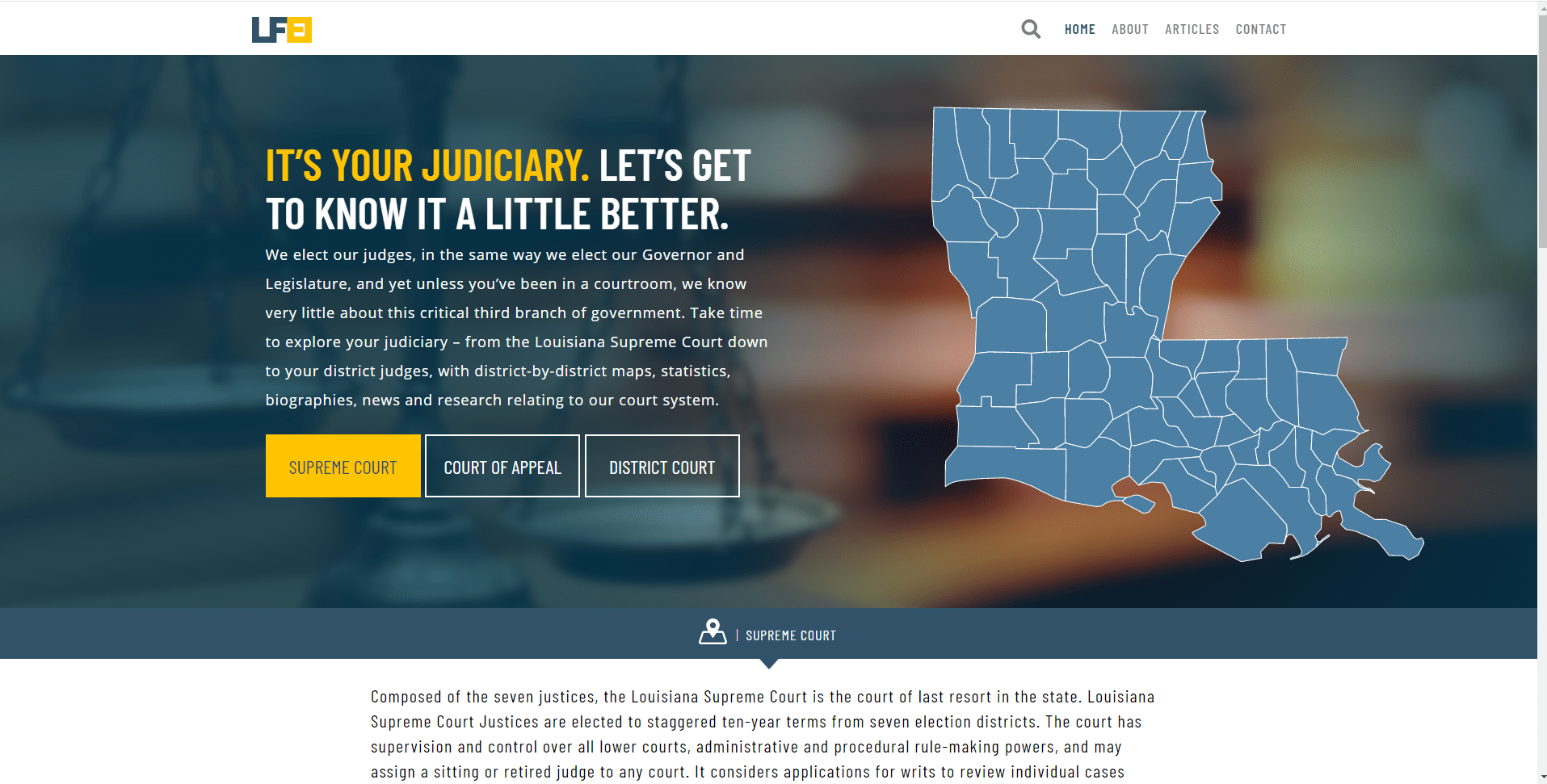 BATON ROUGE, LA – (Monday, July 13, 2020) In its continuing push for greater transparency in Louisiana’s judiciary, the Louisiana Association of Business and Industry (LABI) today launched a new website to give citizens access to information on Louisiana’s courts. LouisianaJudiciary.com is a product of LABI’s Louisiana Free Enterprise Institute, a 501(c)(4) organization. This effort comes after the formation of LABI’s Judicial Program in 2019.

“Campaign signs for candidates seeking judicial seats are already popping up in communities across Louisiana, leaving residents scratching their heads as to just who their elected judges are, who is actually running against whom and how each level of court overlaps or interacts,” said Lauren Chauvin, Director of LABI’s Judicial Program. “This is an essential third branch of government that we feel warrants the same level of transparency and public access as our legislative and executive branches. In recent months, we’ve seen Louisiana’s Supreme Court take steps towards sunshine and accountability, and we want to be a partner in that effort and hopefully serve as a resource for our court systems. Speaking with judges last year during our judicial listening tour, they welcome the interest, and believe the courts belong to the citizens and more public knowledge will result in a better system of justice.”

At LouisianaJudiciary.com, citizens can use interactive maps to explore the Louisiana Supreme Court, Court of Appeal and local judicial districts to read judges’ biographies, learn when terms end and see where lines are drawn. This website is the only resource where citizens can find all this information readily available in one place. A second phase is in development, one that will provide more detailed maps of election sections, public records, a searchable database of court records for select jurisdictions and analysis of how our courts operate.

“This is just phase one of an effort to shed light on the judiciary, as the state’s chamber of commerce we have found this branch of government has an equally profound impact on Louisiana’s business climate as our Legislature,” said LABI President and CEO Stephen Waguespack. “This call for transparency aligns with the genesis of legal reforms passed during our latest legislative sessions that shed more light on how cases play out in court, with legislation lifting gag orders, allowing more evidence to be presented and calling for citizen inclusion via lowering the threshold triggering a jury trial. In all of this, the business community has never sought specific outcomes from the court, we only seek a system that presents a level playing field to ensure equal justice, with fair and independent arbiters of the law. Transparency is the first step toward reaching that goal.”