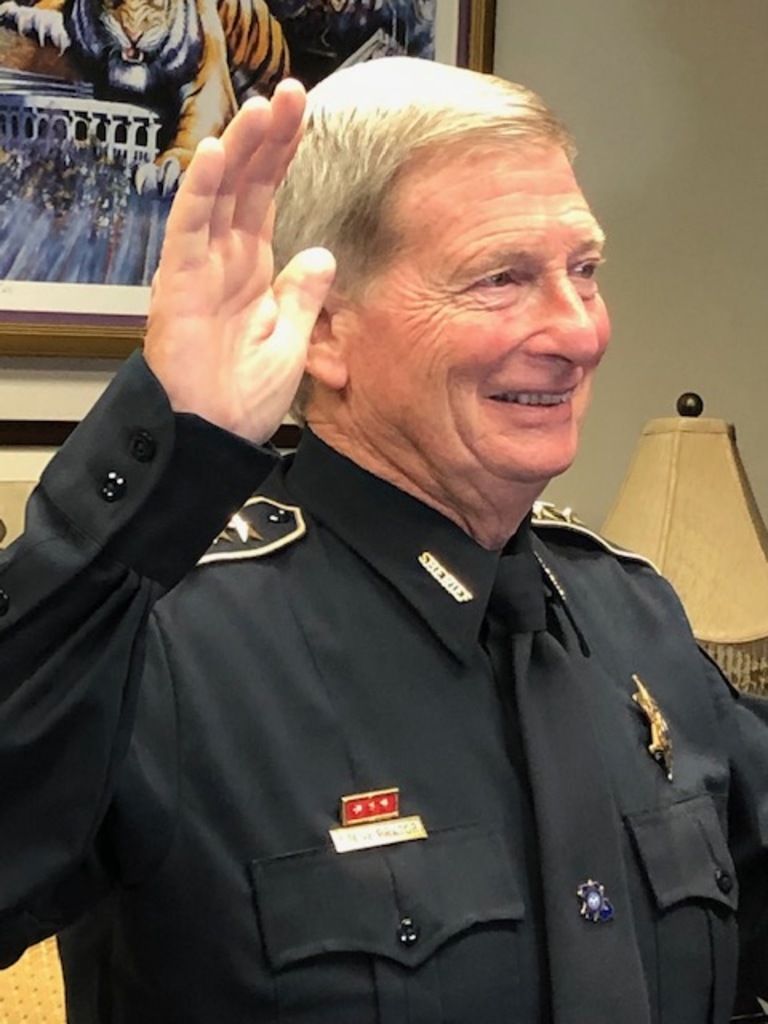 Caddo Sheriff Steve Prator was sworn into office for his sixth term this morning at the Caddo Parish Courthouse. The oath was administered by First Judicial District Court Judge Brady D. O’Callaghan. The Sheriff was assisted during the swearing in by Chief Criminal Deputy Jay Long and Chief Civil Deputy Gary Parker.

Sheriff Prator was re-elected to office during the primary election on October 12, 2019. His sixth term officially begins on July 1. He has served his community as a law enforcement officer since 1973.

The Sheriff is a graduate of the FBI National Institute, Louisiana State University Basic Training Academy, and Louisiana Sheriffs’ Institute. He oversees a department of 681 full-time deputies, 99 part-time deputies, 54 reserves, and 150 auxiliaries.

Sheriff Prator is also director of the Caddo Office of Homeland Security and Emergency Preparedness, Chairman of the Louisiana Peace Officer Standards and Training (P.O.S.T.) Council, president of the Northwest Law Enforcement Planning Agency Board of Directors and is the Northern District Coordinator for the Louisiana Sheriff’s Association’s Emergency Task Force.

His other professional and civic affiliations include the Louisiana Commission on Law Enforcement and Administration of Criminal Justice, Livestock Brand Commission, Sheriff’s Executive Management Institute, National Sheriff’s Association, International Association Chiefs of Police, FBI-NEI Alumni Association, Police Executive Research Forum, Board of Directors for the Boy Scouts of America, LSU-S Alumni Board, LSU-S Foundation Board, Louisiana State Fair Board, Volunteers for Youth Justice Board and Caddo Council on Aging Board, and Caddo Soil and Water Conservation District Supervisor.

Stacey Tinsley | BIZ. Magazine Congressman Ralph Abraham announced Monday that the fiscal year 2021 National Defense Authorization Act will include $48 million for a new entrance and gate complex at Barksdale Air Force Base. Abraham says that the project will allow access to BAFB from the I-220 interchange and pave the way for the [...]

The problem with legislation is that the intent of a law is often at odds with the execution of said law. Such is the case with a proposed ordinance from Shreveport City Councilman James Green. According to an article in Tuesday’s Shreveport Times, Green has proposed an ordinance requiring businesses to install and maintain digital [...]

The National Integrated Cyber Education Research Center (NICERC) has announced the organization’s rebrand to CYBER.ORG, unveiling a new website, logo and plans to reach even more K-12 students and teachers across the country with cyber education content, career awareness and teacher professional development. “The rebrand reflects a significant step forward in our mission to ensure [...]

The electronic edition of the July 2020 BIZ. Magazine. Features include: An update on air travel in Shreveport, The outlook for tourism in northwest Louisiana, plus columns from some of the area's best businesses influencers. https://issuu.com/rbrownbossier/docs/07-2020-biz