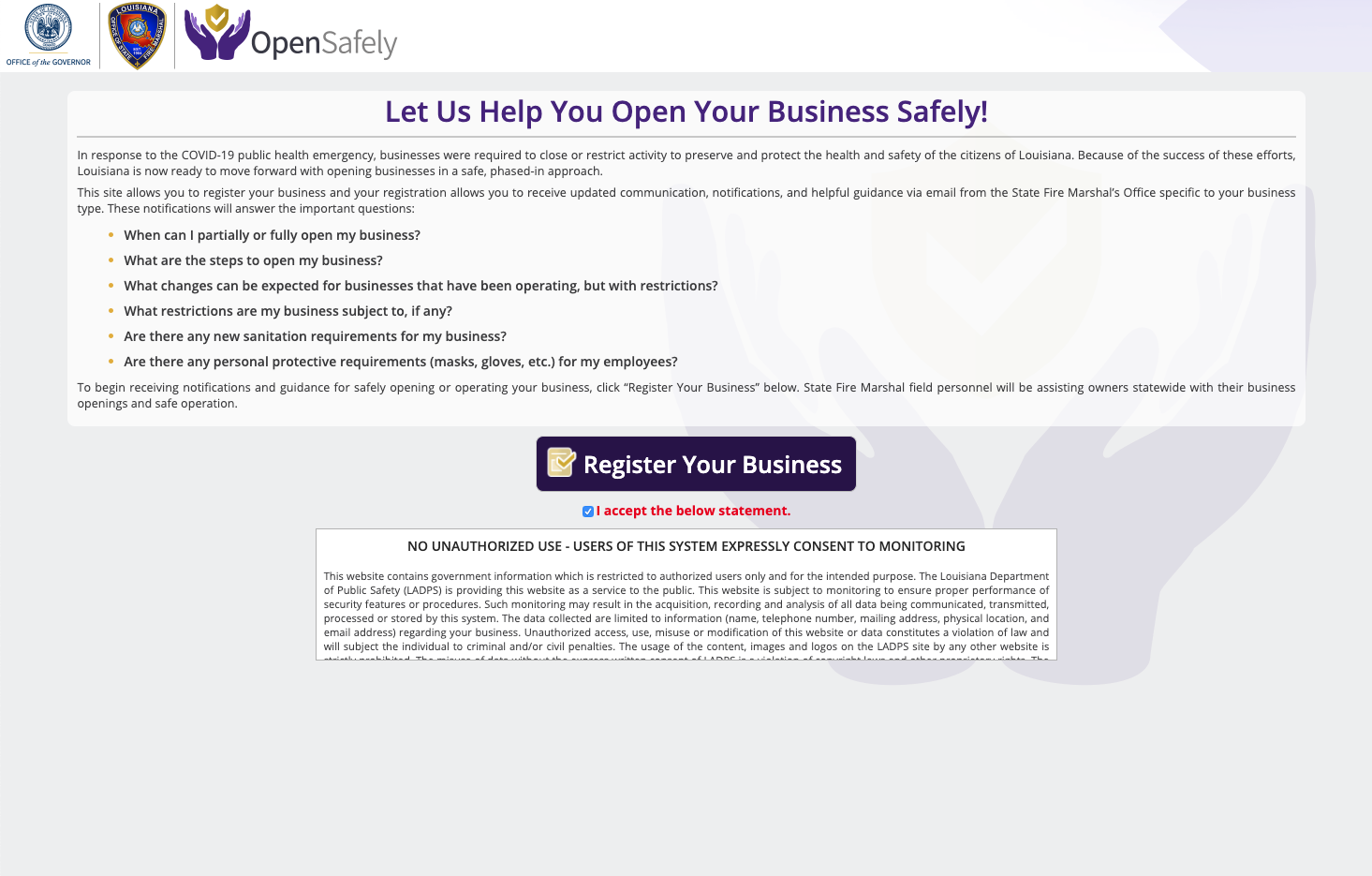 A controversial aspect of a new Louisiana government website that facilitates public complaints about businesses not following COVID-19 guidelines has been disabled, though customers still can file complaints, the State Fire Marshal’s Office said Thursday.

Last week, Gov. John Bel Edwards unveiled OpenSafely.la.gov, which allows business owners and church leaders to sign up for updates about what their business is allowed to do during the pandemic emergency as those regulations change. Louisiana currently is under a “stay at home” order that closes some types of businesses and limits many others; the order is set to expire May 15 and may be extended with modifications.

The new online platform also was designed to allow members of the public to file complaints about businesses not respecting state guidelines, which are based on the recommendations of state public health officials and the U.S. Centers for Disease Control and Prevention. During a lengthy committee hearing about the “stay at home” order Wednesday, some Republicans complained about that aspect of the site.

Rep. Blake Miguez, who is carrying a resolution this session that he says would take the “teeth” out of Edwards’ order, called it a “tattletale website.” Rep. Danny McCormick called it a “snitching website.”

Stan Harris, president and CEO of the Louisiana Restaurant Association, suggested Thursday during a meeting of a legislative task force that the site would “let our neighbors police us instead of the people that are charged with that regulation” and lead to “putting people out of business [through] nothing more than social media shaming.”

Government entities, including local police departments and the Louisiana Department of Justice headed by Attorney General Jeff Landry, routinely solicit tips from the public. For example, the front page of the state DOJ’s website is asking the public to report coronavirus-related scams and price gouging.

Ashley Rodrigue with the Fire Marshal’s Office said the site was experiencing technical glitches caused by high volume, so the complaint aspect has been disabled to ensure the business-registration functions still work.

However, she says the public still can file complaints the way they could before the pandemic, for issues such as building overcrowding and blocked exits, by using the “complaints” link at lasfm.louisiana.gov.

Last weekend, in a tweak to the “stay at home” order, restaurants were allowed to have outdoor dining, though their dining rooms still are supposed to remain closed. State Fire Marshal Butch Browning, when the Edwards administration announced the new website Monday, said his office received a few complaints that some restaurants were not following the rules but did not find evidence to support the complaints.

Rodrigue said the office had received about 500 complaints through the new feature before it was disabled. However, she said “many were out of abuse for the feature” and it was unclear how many of the complaints were valid.