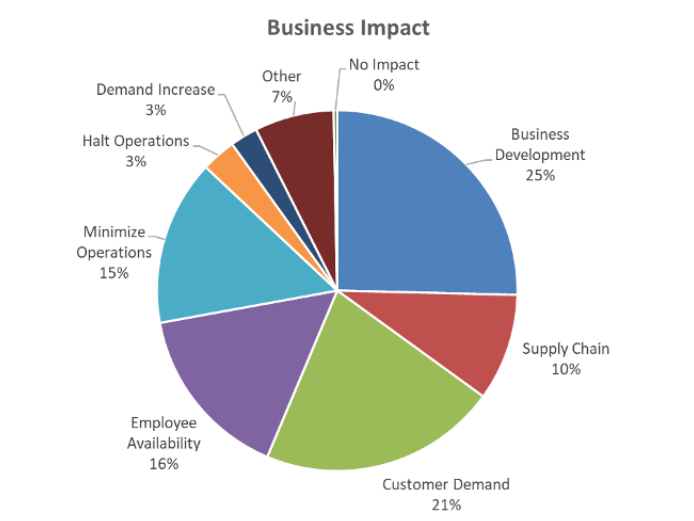 Businesses responding to North Louisiana Economic Partnership’s (NLEP) COVID-19 Business Impact survey unanimously say they’ve experienced major business disruptions caused by the coronavirus pandemic. More than 100 North Louisiana companies responded to the second in a series of business surveys, conducted by NLEP from April 16th to April 24th. 25 percent of businesses polled say their business development efforts, such as business trips and meetings, have been impacted; 21 percent say customer demand had declined, and 16 percent of companies say they had problems with employee availability, while 15 percent had to reduce the size of their operations. Ten percent have experienced supply chain disruptions; and three percent shut down operations entirely. On the other hand, three percent actually saw their demand grow, while seven percent indicated they had some other impacts.

Respondents were asked to address the expected impact of the pandemic on their revenue for the first half of 2020. Of the companies who responded, 58 percent say revenue will be down significantly or revenue decline is a major risk for them. About half the companies that responded said they had postponed or canceled a project or expansion.

Thirty of the 113 companies that responded to the question said they had to lay-off workers because of the pandemic, which represents 3,563 jobs (22% of total jobs represented by the survey). Approximately 53 percent of the companies that laid off or furloughed workers expect all the impacted jobs will be reinstated, which represents 869 jobs. 47 percent of the companies that laid off/furloughed employees selected “Jobs May Return/Too Soon to Tell,” representing 2,689 impacted jobs. Only one company responded that they had permanent layoffs due to COVID-19, representing 5 jobs. On a positive note, five respondents noted that they have added employees during COVID-19. Few businesses who responded to this survey were in the Accommodation and Food Service sector, so this employment picture might not accurately reflect the true scale of unemployment our region. In North Louisiana, hotels and restaurants represent approximately 22 percent of jobs in 2019, so we expect the COVID-19 impacts on jobs in this sector to be greater and longer-lasting.

Access to affordable childcare was a common reason that many Louisiana residents were unemployed or inconsistently employed pre-COVID-19, but this problem has grown significantly post-COVID-19 as approximately one-third of certified Louisiana childcare providers have noted that they may not be able to operate going forward because of financial impacts caused by the pandemic. Forty-nine companies (43%) said lack of childcare was an important issue.

Other critical needs for businesses include access to capital (29%); restoring supply chain (19%); identifying skilled workers (19%); and other (33%). Respondents were asked if they applied for any of the disaster relief programs offered by various agencies as a result of the pandemic. 73 percent of the companies that responded applied for the SBA’s Paycheck Protection Program, 13 percent applied for the SBA’s Economic Injury Disaster Loan (EIDL); 10 percent filed for the EIDL Advance grant; and four percent said other.

The companies responding to the survey represent a minimum of 16,400 jobs in North Louisiana pre-COVID pandemic (not all respondents provided pre-COVID employee count). Approximately 68 percent employ 100 or less workers. Read the complete survey report on www.nlep.org.