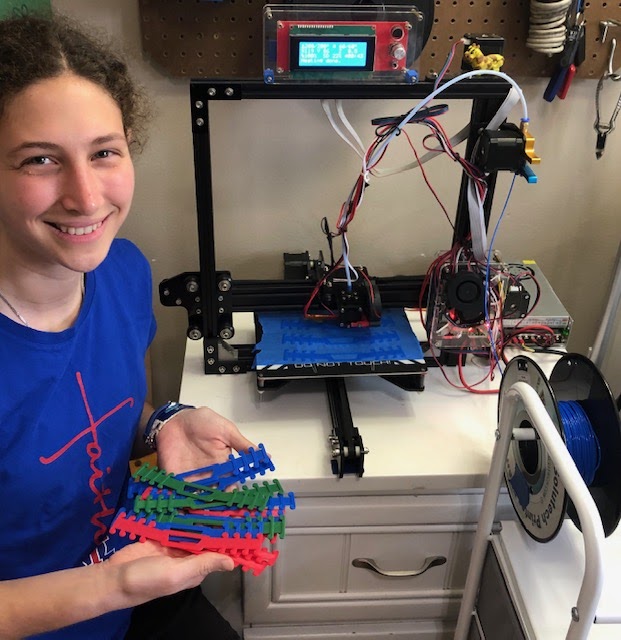 Louisiana Tech freshman Avereigh Barras heard there was a need for ear guards for medical personnel.

Barras, a mechanical engineering major and student worker who operates the College of Education’s 3D printers, answered the call in a big way.

“Overall, this project is going great and only becoming greater with more help and support,” she said from her family’s home in Albany near Baton Rouge. “Next, I hope to distribute to whoever would benefit from them.”

Ear guards/extenders are a recent invention by Canadian Boy Scout Quinn Callander that protect the backs of face mask wearers’ ears from the discomfort of the elastic constantly pressing on them. It’s both simple and genius. Imagine a thin six-inch ruler with four little wings on the edges that act as hooks. The guard goes on the back of your head, parallel to your shoulders at ear level. Then, the mask’s elastic strings are adjusted to hook onto the “wings” so the elastic doesn’t touch the ear at all.

“The game plan,” Barras said, “is to just keep printing and shipping. All of the people who have received their mask strap extenders have loved them and say that they give them so much relief.”

Using two of the University’s printers and her personal machine, she made 150 guards the first two-and-a-half days of the project that began April 6. She would crank out about 16 guards in two hours.

That’s because she now has five 3D printers at her house, including one from friends Justin and Trisha Slade who live nearby, and another from Tech alum Kyle Plauche, “very generous people,” Barras said, “who are letting me use them for as long as there is a need.”

The guards are made of PLA, a plastic most commonly used for 3D printing. Some of the PLA she’s used comes from Tech, but most is from her personal stash. Plus, her friends who loaned out their printers also donated the filament they had on hand.

She’s also taught her mom how to take ear guards off a printer once they are complete and how to tell the printer to print more “so through the night, my mom and I alternate waking up to keep the printers printing,” she said. “My dad helped me fix a couple of printers when they ran into some problems — both are back in action. Many friends and family donated money to be used for materials, which is very kind as we are not asking for money from people we make the ear guards for.”

Barras said it takes her only a few minutes to get the guards off and tell the printer to make more, and she continuously has all five on the job “the whole day I’m awake,” she said. “I keep this rhythm going throughout the day, because with the quarantine, all I have to do during the day is class and homework and chores.”

Although the relief of having one is immeasurable, an ear guard costs approximately eight cents; this is the best calculation since it’s a new invention. And that’s if every gram of filament is used and if there are no machine errors, Barras said. One roll of filament costs about $20. The price does not include electricity, shipping, and packaging, which of course makes the cost of each ear guard a bit higher. Each ear guard weighs four grams.

Barras first heard of the idea from her mom, who’s a nurse and saw a Facebook post about the Boy Scout who introduced them. The same day, UTeachTech Master Teacher Glenn Larson shared the same post with her. Plus, a friend who’s a nurse in Hammond texted her that everyone’s “ears are getting bloody from the masks.”

“An already stressful shift of work shouldn’t be made more stressful when there’s an easy fix: ear guards,” Barras said.

Her mom is helping her with the project, both by contacting people who may need the guards, assisting her with shipping and handling, and now, since she’s been “trained,” by helping with the actual printing.

Barras is taking 10 hours this quarter. She’s also a member of both the Association of Catholic Tech Students (A.C.T.S.) — she serves on its leadership team as the Faith Formation Committee Co-chair — and the Engineering and Science Association’s Freshman Council.

“I would say the best way to help in a time like this, when we are unable to comfort others in the way we normally would, is to pray and do our part to the best of our ability,” she said. “We are all called to give of our own unique gifts and abilities, whether it’s following the rules mandated by our Governor, saying a prayer for those who are sick or caring for the sick, washing our hands, shopping for an elderly or immunocompromised neighbor, or 3D printing ear guards for medical workers.

To help To help fund the project, Barras has started a GoFundMe page. “We will use the donations to pay for materials and supplies as far as printing and shipping goes,” Barras said. “Any excess donations will be given to a food bank that serves those in need due to job loss during this pandemic.”