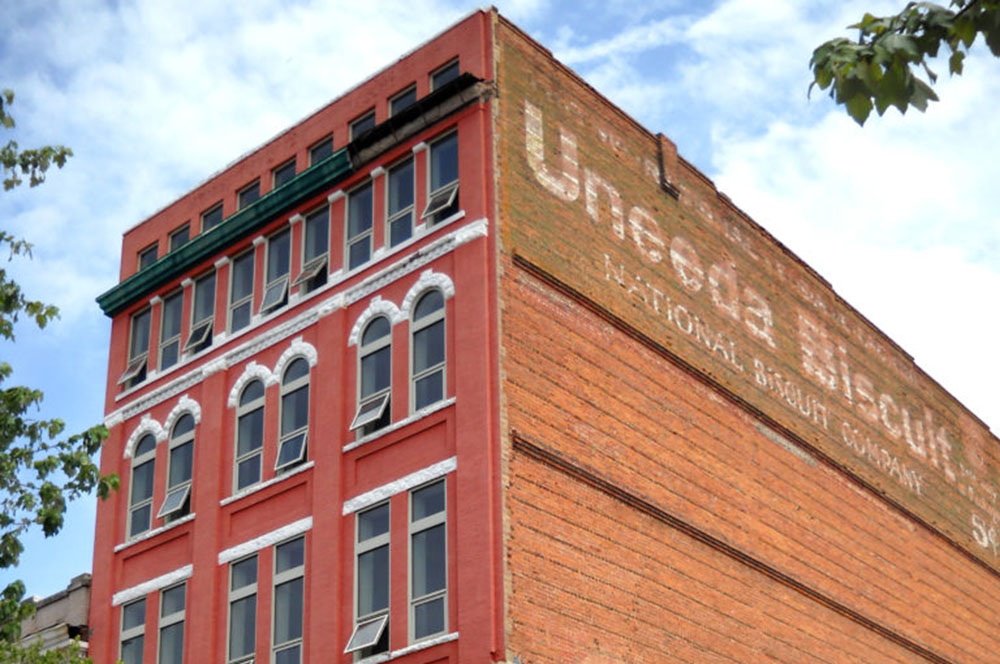 [Editor’s Note: This was originally published on the Shreveport DDA’s blog: https://downtownshreveport.com/uneeda-lofts-moves-forward/]

We’ve always loved the irony that one of downtown’s most loved buildings is known for a painted ad for an item that was never sold there. The building at 711 Milam that is most commonly known as the ‘Uneeda Biscuit’ building started life as the Vordenbauman-Eastham Company building, and for years was the Marcus building for the furniture store that did business there. In 2020, it will reopen as the Uneeda Lofts, 32 one-bedroom units, housing both market rate rental spaces and salary-limited for artists and other creative professionals.

Developers Edward Taylor and Wayne Brown say the construction to date has been challenging and slow because the building was in worse shape than anticipated. Over the past decade, absentee ownership deferred maintenance on a once-small roof leak. Taylor and his partners are having to deal with not only substantial structural concerns, but five interior floors that had partially collapsed due to the wet interior conditions. The building now has a new roof, the building is shored up, and the structure for the fire-rated stairwell leading from the basement to the fifth floor is completed. Taylor says the unexpected complications created a 6- to 8-month delay, but all is now on track with no changes to the interior plans. The State Historic Preservation Office (SHPO) is also on board, and has told the developers to proceed with their construction. That is good news for this building and downtown.

When it was constructed in 1902, the five-story orange brick structure overshadowed everything around it, and for a time it was the tallest privately-owned building in the city. Over the years, you could purchase everything under the sun there — from horse-drawn carriages and brass cuspidors to shotguns and screen doors. It was home to a carriage and hardware shop (1913) an armory for the National Guard (1917), a warehouse (1923), a grocery (1926), a furniture store (1933-1952), and an art gallery (2006), but its next incarnation is the one that will save it for the next generation.

When finished the Uneeda Biscuit Lofts will house 32- 600 square foot one-bedroom apartments with brick walls, wood floors, natural light and high ceilings. Upon entrance to the building via a large glass front door on Milam Street, you will be greeted by a leasing office and other open offices, including possible commercial rental space and tenant amenities such as a lounge and artist work space. A stairwell on the first floor will lead to a mezzanine that will feature gallery and display space for the artist residents. A full basement will also include artist work space. The vacant lot next door, once home to another historic building, will be used for parking and perhaps a tenant greenspace.

The lofts are really perfectly situated on one of the prettiest blocks downtown with amenities such as the beautiful Asian Gardens, the Strand Theater, Emmett Hook Performance Center, Central ARTstation, artspace, Robinson Film Center, Rhino Coffee, Caddo Common park, and Every Man a King Distillery all within quick walking distance.

The rehab is a much-needed new day for the old Uneeda building. We are thrilled to see it not only saved but put back into use as an art-filled residential hub in downtown’s western edge.