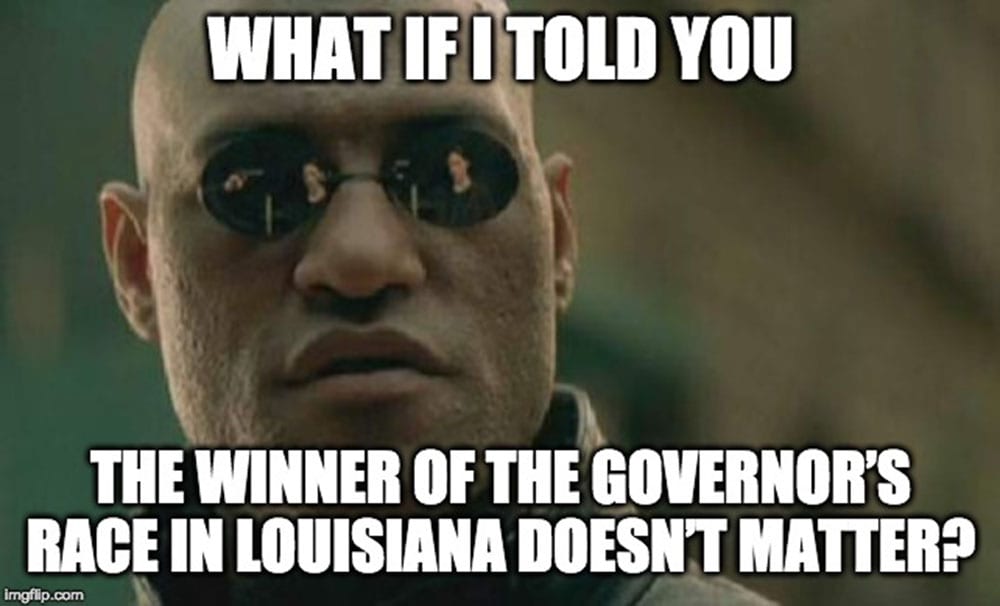 As powerful as the office of governor is in this state, it would be hard to believe. However, the result of Saturday’s vote and potential runoff, Morpheous would be right.

“With a supermajority, Republicans would have the two-thirds vote required, at least on paper, to override a veto by Gov. John Bel Edwards, a Democrat, should Edwards win reelection on Nov. 16 against Republican businessman Eddie Rispone,” Bridges wrote. The GOP picked up two formerly Democratic-held Senate seats Saturday, giving them the 26 seats needed for a two-thirds majority in that house.

In the House of Representatives, Republicans will have to await runoff results in November to gain the supermajority.” There are five Republican races in runoffs there, and the GOP only needs two seats.

As the balance of power shifts toward Republicans, one must wonder if this is good for the state. There is a reason the executive branch has veto power, and that power is now in jeopardy.

In a perfect world, everyone would work together toward the same goal, even if there are differences of opinion on how to accomplish it. But this is far from a perfect world.

With the polarization of our political system, the idea of compromise has become farther and farther away from reality. With a supermajority, the legislature won’t need to compromise with this, or any, governor.

Republican and business political action committees know this fact and are pulling out all the stops to secure their supermajority. Saturday’s results are proof that it is working.

“The gains reflect the continuing ascendance of Louisiana’s Republican Party and the ongoing decline of the state’s Democratic Party, which held a majority in the Legislature for roughly 140 years until 2011,” Bridges wrote.

Regardless of one’s political views or affiliation, most would agree that one-party rule is a dangerous thing. Our state and nation are equally based on a combination of majority rule and minority rights. That’s why we have two houses of government, an electoral college, and balance of power.

It may be too late to change course, as Republicans have all but what they need for supermajorities in both houses. I just hope compromise isn’t lost in “The Matrix” as a result.