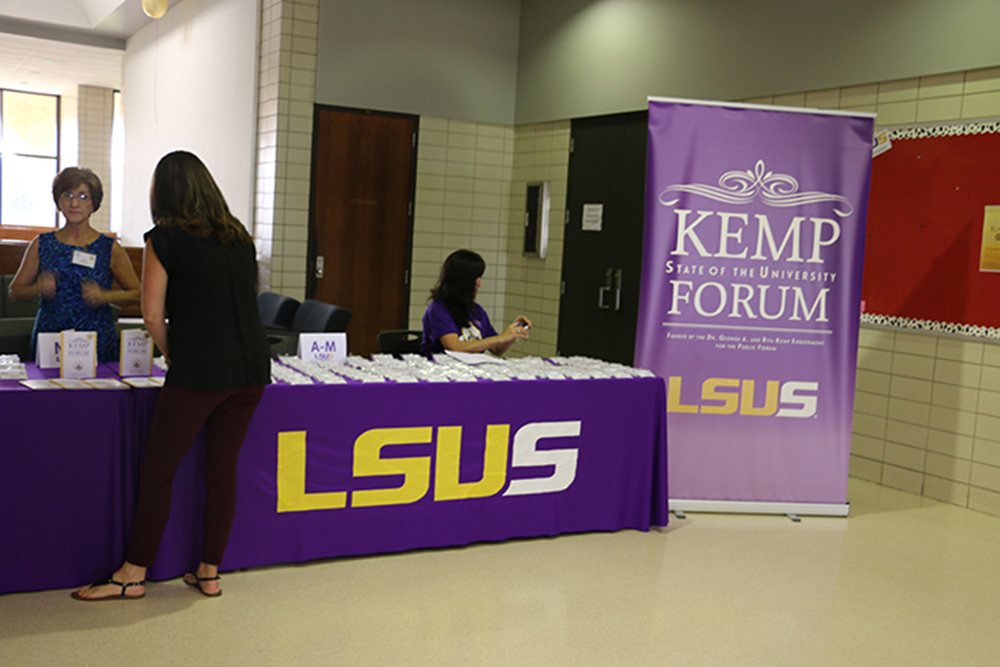 LSU-Shreveport has seen growth, new additions, and change over the past 12 months.

LSUS Chancellor Larry Clark updated alumni and interested community members about the health of his university at the Kemp State of the University Forum Oct. 10.

First off, enrollment has seen an increase of 15% over a year ago. Clark noted that it’s a change reflected in the registration process.

He acknowledged that while enrollment is up, a large portion of that is due to online enrollment. Clark cautioned that basing LSUS budget on that type of enrollment is unwise, due to its volatile nature.

“The reality is that as much as we celebrate enrollment online, that’s an enrollment that is at risk. Online is highly, highly competitive. A lot of universities are looking to that marketplace, so we need to be careful to not build into our budgets too many fixed costs that then make it so that if enrollment comes down, we’re not in a (difficult) situation, like I came into in 2014,” he warned. “We can’t be there again.”

This line of thought has caused Clark to invest in the LSUS campus as much as possible, specifically, different things that sustain quality but not take the risk of fixed costs being too high.

For example, one of those things is the Cyber Collaboratory, a 10,000 square foot initiative that will provide resources for internet technology, cyber security, and robotics.

“If you think Sci-Port on steroids, you’ll know what the plan is with that,” Clark exclaimed.

Another investment in the campus was LSUS opened its Veteran’s Resource Center in the technology building.

“The Veteran’s Resource Center is so critical because of the number of veterans to come out of Barksdale and what we can do to support them,” Clark said.

The university also hopes to make some campus improvements with a walking/jogging track around the campus, trimming of the oak trees lining the main drive of the campus, and some field improvements for sports teams. The technology building’s marble panels will be replaced and walls will be renovated in the science building. They also plan to build a bridge from campus to University Court Apartments.

On the University Court Apartments, Clark was very forthcoming about the property’s challenges.

“When it was thought up in the 1990’s, it was the state’s first ever lease with land owned by the university and apartments built and owned by a third party,” he said. “It was not a good contract.”

The apartments’ age is showing with technological and other challenges, Clark said, “We have the world’s worst internet in housing for our students. We have some other challenges as well. It has been a major problem for us.”

He also explained that the lease is incapable of being changed for 40 years, meaning the university could have the land without the buildings or the buildings alone. Fortunately the buildings are in good shape and they are working on solutions.

LSUS has also hired 26 new faculty members, and had others be named to new positions or change titles. One of those is Helen Taylor, who was named the permanent Provost and Vice Chancellor of Academic Affairs. Dennis Wissing was named the founding dean of the College of Education and Human Development.

In his speech, Clark noted that he hoped to give a permanent pay raise to the faculty, noting they had received only two 3% pay raises since 2008.

Lastly, Clark noted that the LSUS Foundation would officially take over the historic Spring Street Museum in downtown Shreveport in October after it was donated by the Colonial Dames.

The Spring Street Museum will complement other LSUS resources that support arts and culture. This includes the LSUS Northwest Louisiana Archives; the Noel Collection, the largest private collection of antiquarian books in the United States; the Pioneer Heritage Center; and LSUS Red River Radio.

This fall, the university will begin operating new academic programs through the Spring Street Museum, including internships for history students and a digital arts class using the museum’s collection. Plans also include creation of a certificate program in museum studies. Faculty and community advisory boards will help develop these programs.