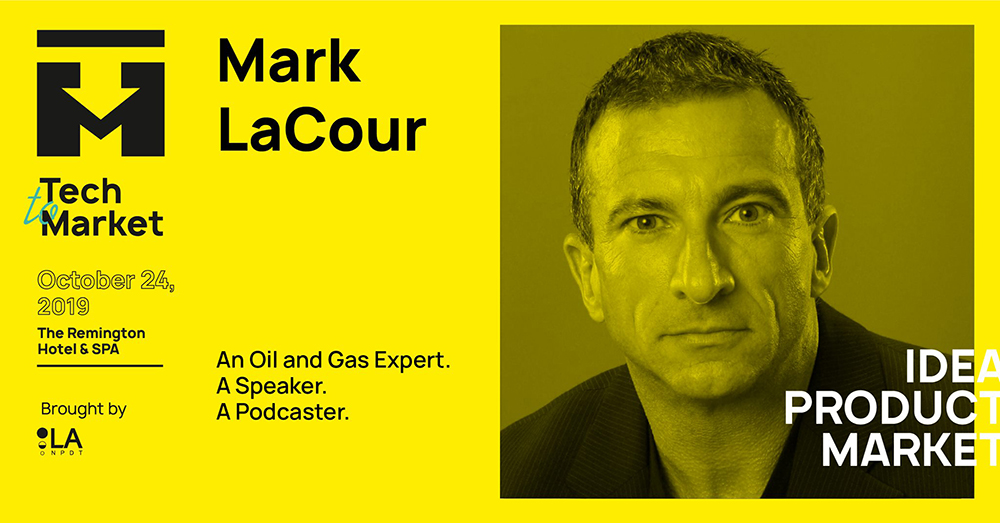 Mark LaCour, an oil and gas expert, recently chatted with BIZ. Publisher and Editor Sean Green about his 20-plus years in the industry he’s leveraged into being a speaker and podcaster ahead of his speaking engagement at Tech to Market.

He has ties to north Louisiana with his father’s family hailing from the Mooringsport and Bossier City area. He also owns capped gas wells in the same area. Although oil and gas is a vital industry to north Louisiana, Mark said he’s not coming strictly because of that, he’s coming because of all the bright, young, smart people trying to do really cool stuff via entrepreneurism.

“Something miraculous has happened in north Louisiana to where there’s now this startup scene. If you would have asked me 10 years ago where something like that would have kicked off, I never would have said, ‘Shreveport.’”

Below is a Q&A between Sean and Mark (click here to see video of their conversation):

1. Tell us about your experience in the oil and gas industry and how that led you to becoming a podcaster.

Got my start 20-something years ago with a phone company and gave me their book of oil and gas business because no other salesperson wanted it, because it was hard. It took me about three years to learn the industry, I turned it around. Went to work for Forrester Research and had their oil and gas key accounts, that’s where I learned market research. Then, 10 years ago we parted ways and I started my own company out of anger, modalpoint. About five years ago, marketing guy came to me and told me we should start a podcast. I said, “That’s a stupid idea, we don’t have time for it.” Obviously, I was wrong. Fast forward to now, and now modal point is my speaking platform and owns Oil and Gas Global Network, which is our new media company. We have 17 more podcasts slated to do between now and the end of 2020, and we have all these live events in North America.

Influx of new process and technology has come into the oil and gas industry at the fastest pace I’ve ever seen in 20 years. More or less, prices are low so companies have to drive up efficiencies, you combine that with emerging populations in the world who don’t need (consumer goods made from oil and gas) but they will in the next couple generations. The downstream, petrochemical industry is booming. So, it’s just a great time to be in the industry.

2. In your podcasts, do you give listeners a general low down on the industry or is it more technical?

Each show is different. Our No. 1 show is Oil and Gas This Week and that’s a topical news show because regardless of what political spectrum you’re on, no one gets it right. So, we break down the news articles and try to tell you the truth of what’s going on. We have a health, safety environmental show and we just launched an oil and gas tech show recently. We’re getting ready to launch an offshore (drilling) show, we have an onshore show already, we have an oil and gas industry leaders show. Depending on what slice you have curiosity about and what you want to learn, we have something.

3. What about podcasting over other new media made you say, “This is what i want to do”?

Told me five or six years ago that people would pay me to talk, I would have thought you’re insane. Now, we’re sitting on top of the seven oil and gas podcasts in the world and launching No. 8 in October.

I saw the opportunity. The part I don’t talk about is literally every day I have 10 to 20 young people reach out to me who say they did the research on what all oil and gas is responsible for making. One young person at a time, we’re changing the perception of our industry. I sincerely believe the oil and gas industry is the most beneficial industry in the history of mankind.

This younger generation learns in real time. My generation would take a company’s money, go to a conference out of town and learn about a subject because there was no internet. Now you can pull your phone out and learn right there. That’s where a podcast lives and now they can listen to a podcast while they’re doing something else — working out, commuting, washing dishes — and we’re in their heads.

4. What can people expect to learn or take away from your presentation at Tech to Market?

I hope when people walk out of that room, they walk out with a mental road map of what success looks like when you’re wanting to bring your entrepreneurial spirit to an industry that historically doesn’t like small businesses. That’s changed. Now, those large companies all have their own internal venture capital groups because they know what they need to compete is going to come from another huge company, it’s going to come from a little two-man startup in Shreveport, Louisiana or Chile or Rio de Janeiro.

I’m going to come to the event and talk about all of the startups I’ve seen over the years — what they’ve done well, the mistakes they’ve made, and what companies can do if they want to enter that entrepreneurial world. The perfect example is capital. If you bootstrap it, it’s slower growth but you own what you’re doing. The moment you take venture capital money, you’re now working for those venture capitalists. And, little things like sales — that’s the most important thing an entrepreneur can do because that’s how money comes in the door.

5. For an entrepreneur, what’s one piece of advice yo can offer them?

Cashflow is king. It doesn’t matter how profitable you are on paper. I went through this myself, when I started modalpoint, I saved up a year’s worth of cash and I still ran out. The most important thing you can do is positive cash flow. Profitability comes later, be sure you make enough to pay your bills.

Get your seats for Tech to Market here: https://lnkd.in/guf6-Rq