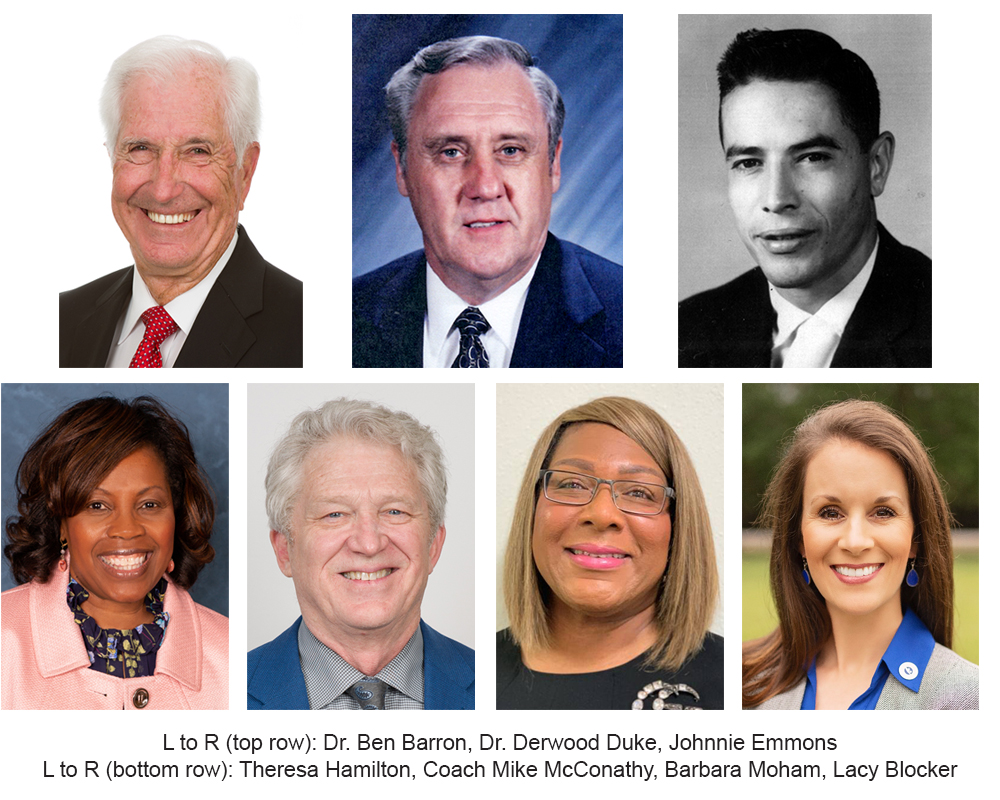 NATCHITOCHES – Northwestern State University’s Gallaspy College of Education and Human Development will induct several individuals into the Hall of Distinguished Educators and has named one the Outstanding Young Professional for 2019.

Individuals inducted into the Hall of Distinguished Educators must have graduated from Northwestern State at least 30 years prior to nomination. This year’s honorees are Dr. Ben Barron, Dr. Derwood Duke, Johnnie Emmons and Coach Mike McConathy, all of Natchitoches; Theresa Hamilton of Hammond and Barbara Moham of Cedar Hill, Texas.

The College of Education and Human Development will host a reunion and reception in the Teacher Education Center Commons beginning at 1 p.m. Saturday, Oct. 19 during NSU’s Homecoming festivities.  The induction program will follow at 1:30 p.m. in the TEC Auditorium.

Barron began his career as an elementary teacher and assistant principal in West Baton Rouge Parish.  His career in higher ed began at the University of Southern Mississippi before his tenure at Northwestern State, which lasted from 1967-2007 when he served in many roles over the years as a professor, assistant dean, director of Educational Research, department head, division director, acting vice president for finance and vice president of University Affairs. He later served as an educational specialist for Pearson Publishing Company as a presenter, consultant and teacher of mini-courses throughout the U.S.

Barron is married to Janice Susan Barron and has three children and five grandchildren.

He began his career teaching math and coaching basketball at Mansfield High School from 1959-1965 before transferring to Natchitoches High School as a health and P.E. teacher, head basketball coach and supervisor of student teachers until 1970 and continued those responsibilities  at Natchitoches Central High School through 1973 when he joined the faculty at Northwestern State as a graduate assistant in health, physical education and recreation.  He was assistant basketball coach, golf coach and assistant professor at NSU from 1974-1981 when he was began serving as director at Natchitoches Central.  He was superintendent of schools in Winn Parish from 1988-1996 and returned to NSU from 1997-2009 as assistant professor of education leadership.  He was superintendent of the Natchitoches Parish School Board from 2009-2014.

He is married to Ann Gibson Duke and has three children, five grandchildren and four great-grandchildren.

Emmons earned a bachelor’s degree in physical education with a minor in mathematics at Northwestern State in 1951 and a master’s in P.E. at Louisiana Tech and completed Plus 30 at NSU.  He was an outstanding student-athlete at NSU.

Emmons’ began his career in 1952 in Spearsville where he was a math teacher and girls basketball coach.  He later coached baseball at Bernice and established a football team there.  He coached football at Ferriday, Homer and Lake Charles.  Joining the faculty at NSU, he taught health, physical education and driver’s education and coached football, baseball and men’s and women’s tennis, which he started. He was selected in 1973 as one of the first inductees into the N Club Hall of Fame and was honored in 2013 as one of NSU’s Athletic Legends. Emmons was selected as one of the school’s Top 100 Demon Football Players of the Century in 2007.  The baseball record he set in 1952 with a batting average of .458 still stands.  He also still shares the school record for most touchdown receptions in a game. In recognition of his emphasis on academics, the Athletic Academic Support Center is named in his honor.

Emmons and his wife Nelda have been married 67 years and have two children, three grandchildren and two great-grandchildren.

Hamilton earned an undergraduate degree in elementary education at Southern University in 1983 and a master’s degree in educational administration and Plus 30 at NSU in 2001.  She was a teacher at NSU Middle Lab, Parks Elementary and Goldonna from 1983-2007, serving as principal at LP Vaughn Elementary until transferring to the Tangipahoa Parish School System from 2007-2016 where she served as chief academic officer, chief desegregation officer, supervisor of federal programs, principal at Hammond Eastside Upper Elementary and Martha Vineyard Elementary.

Hamilton joined the Louisiana Department of Education in 2016 serving for a year as Southern Network Educational Consultant. She is currently a senior program consultant for the National Institute for Excellence in Teaching.

Hamilton and her husband Alvin have been married 29 years.  They have two children and one grandson.

McConathy graduated from Louisiana Tech University in 1977 with a bachelor’s degree in health and physical education. He earned a master’s degree in health and physical education at Northwestern State in 1983 and completed Plus 30 in 1989 at Northwestern State, Centenary College and Louisiana Tech.  McConathy taught at Airline and Bossier High Schools and was on Behavioral Sciences Department faculty at Bossier Parish Community College for 16 years, serving as interim department head in 1998-99.

While serving as head men’s basketball coach at NSU since 1999, he has taught classes in the Department of Health and Human Performance, including personal health, team sports, individual sports and driver’s ed. He and his teams have been involved since the inception of the NABC National Association of Basketball Coaches Stay to Win program, which goes to local elementary schools and encouraged youngsters to stay in school. The NSU Men’s Basketball team has one of the highest graduation rates in the nation at 90 percent.  Since the inception of the Academic Progress Rate in 2004, the men’s basketball team has ranked in the top 10 percent five times. The APR measured how well programs retain and keep student-athletes eligible to compete academically.

He has been married to Connie McConathy for 41 years.  They have two sons and three grandchildren.

Moham began her career as a teacher in DeSoto Parish in 1987 and was a teacher and administrator in the Little Rock, Arkansas, school system from 1988-2000.  She was a professor at the University of Central Arkansas from 1992-92 and assistant professor at Arkansas Baptist College from 1998-99.  Since 2000, she has served as a principal and specialist for the Dallas Independent School District.  In Texas, she is certified as a teacher, principal, master reading teacher, generalist, reading specialist, supervisor and English as a second language instructor.

In the Dallas School District, Mohan has served as a reading demonstration teacher, master reading teacher, instructional dean, and administrator/principal at the secondary and elementary levels. She has been awarded grants for research on how to improve teaching and learning and been recognized with several academic achievements.

Moham has been married to her husband William for 10 years.

Blocker earned a bachelor’s degree in elementary education at NSU in 2004. She has been an elementary and junior high English/Language Arts teacher in Rapides, Vernon and Calcasieu parishes and became certified to teach in Texas for one year in the Newton Independent School District. She has served as a teacher leader, sponsor/advisor to student organizations, organized workshops for struggling writers and a weekly book club for students while integrating technology into the classroom.

She has been married to Jeremy Blocker for 14 years and has a 5-year-old daughter.