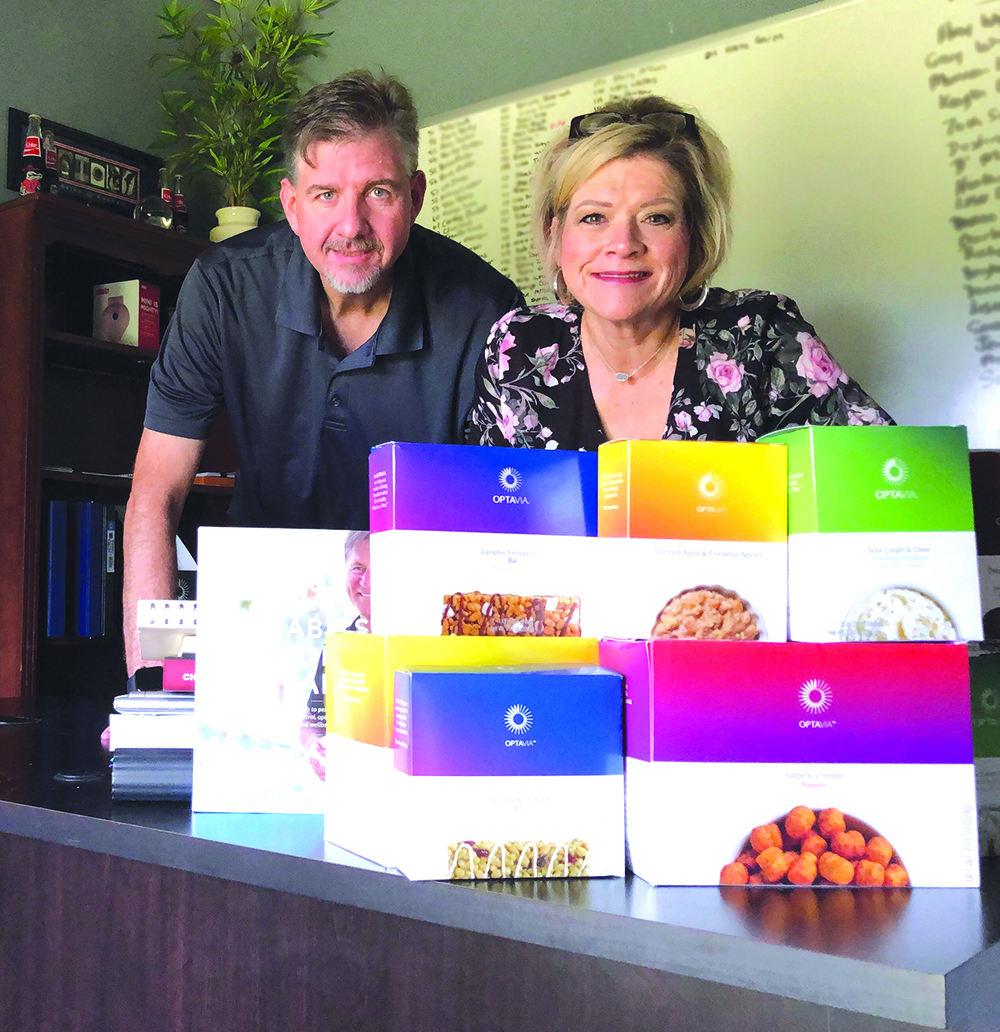 David and Tina Specht were sick and tired. Suffering from diabetes, high blood pressure, high cholesterol, and arthritis, the pair were looking for a way out of their unhealthy lifestyle. Little did they know that their journey towards better health would open the door for a new business that would give them a new sense of purpose.

“We saw Optavia is not about making money, but helping people by bringing freedom and hope to their lives,” David said.

“I went in thinking I have to get weight off because I’m getting ready to take five insulin shots per day, and in the future I saw dialysis. So I thought I would try one more thing to get healthy,” said Tina. “I jumped in and learned from day one what it really is to help people and be on a journey.”

Essentially, Optavia is health program based on eating several small meals a day, called “fuelings,” provided by the company, along with a lean meat and servings of vegetables for dinner. Guided by health coaches who provide advice and answer questions, the goal is to create a new, healthy lifestyle change in program members.

“We’re not the food police, we come alongside clients and help them in their journey. It’s a very wholesome thing, it’s not about reaching levels but giving hope to other people,” David said.

Tina was the first to jump into Optavia after watching her personal friends’ progress over several months. She sought guidance from them and saw her health continue to deteriorate despite her efforts to lead a healthy lifestyle.

“I watched my friends and saw their financial freedom that they got from helping people. I thought, ‘If they can do it, why can’t I?’” Tina said.

David agreed to join in solidarity with his wife, saying that, “With all the boxes (of health and diet programs) I’ve thrown away over the years, I wanted to go in knowing we would give it a 100 percent effort in the beginning.”

Tina went in with both feet, however, opting to become a health coach on top of joining the program. This allowed her to be a coach for David and allow them to make their boxes of fuelings more affordable.

David was a little more cautious, only becoming a health coach in January of this year. What finally pushed him in that direction was questions from people who saw his and Tina’s transformation and seeing others change.

“I felt obligated to offer them the same thing I have experienced,” David said. “Seeing people who are struggling with health, finances, self image or confidence, I felt compelled to try and help.”

Even then, he told Tina that it would be nothing more than a side hustle to his day job as president and CEO of Specht Newspapers Inc. [Editor’s Note: BIZ. Magazine is owned by Specht Newspapers, Inc.]. But Tina said that even though he wasn’t going all in, he’s been on every call since she became a coach and works on health coaching throughout the day, every day. David said his eagerness to be a health coach is simple — it fills the need in him to help people.

“In the news business, we’re here to make a difference in the community,” he explained. “I had a stint where I wanted to help people with leadership training. That gave me the skills and desire to where I could produce real results.”

While on the surface, there’s not a lot of common ground between health coaching and the newspaper business, David was able to leverage those lessons he learned with leadership and business training in the past to build himself as an expert in helping people.

“In 2015, when I gave up in the leadership realm, I felt like a failure in a lot of ways. I zoned in on what I was good at — running newspapers. Optavia came along and started teaching the same things I had learned and taught four years ago,” he said. “It reignited a spark in me. While it may not have been a success locally, those things were still needed.”

David retooled his skills and ventured out again with a different mindset focused on helping people with their health. He did that by reinventing himself on social media and rebranding and restarting his website, davidaspecht.com. He also guided Tina through the process of positioning herself as an expert, something that she admits was pretty painful at first.

“I am an introvert. It took a long time to get comfortable,” Tina revealed. “But when you hear people who you don’t know personally but know your story say, ‘You impacted my life,’ it gets you to share more.”

“We hated selfies,” David laughed. “When we began to enter the world as health coaches, we had to be engaging on Facebook and be very intentional with that. We can’t touch everyone we need to touch by just walking up the street.”

Tina notes that the visibility of living their life out loud also holds them to a higher standard. David said it means their social media isn’t where they hang out, it’s where they do business, noting it takes about six months of exposure to a client before they come to them about Optavia.

“I’m not going to post memes about Donald Trump. I’m going to be intentional to where people know I’m a health coach and I’m staying true to my health journey,” said David. “We don’t go after anybody and sell anything, they come to us. It’s the ones waiting to see if you’re going to be consistent.”

They’ve reached a level of success, in fact, to where she has been able to remove herself off the payroll of Specht Newspapers, Inc. She said that is all part of their effort to “dream big.”

“We were told to dream big. We were scared, but we put pen to paper and dreamed big. It’s been great to step back and focus on the dream we have of helping people get healthy,” she said.

Many people will Google search Optavia and see it as a multi-level marketing (MLM) company. David and Tina bristle at that notion because they know it works and achieves its goal of helping people.

“You see it the way you want to see it, but I get paid well to help you through your journey and I’m here as close or as far away as you want me to be,” Tina said. “Do you move up through the company? Absolutely, but this company has been around for over 17 years and it’s a proven fact that it works. Every coach that is successful goes all in and gives it their all, so why not be compensated for it?”

David admits that while the company’s pattern follows MLM, compensation within the company differs and that the health coach role adds a vital factor missing from most MLM.

“Nobody is going to call an infomercial and do something like this,” he said. “Our major component is the health coach. We can send you a box and take your money, but that health coach being there for you is what makes the difference.”

Now, the husband and wife team’s goal is to reach Optavia’s Integrated Presidential rank, the top spot in the company. This would see the couple in a role where they are helping thousands of people either directly or via their network.

“We’re never going to arrive. People in the presidential rank in our company are still out there coaching. Our ultimate goal is to be in such a position and place of impact that our influence is large, and we’re consistently impacting others,” David explained.