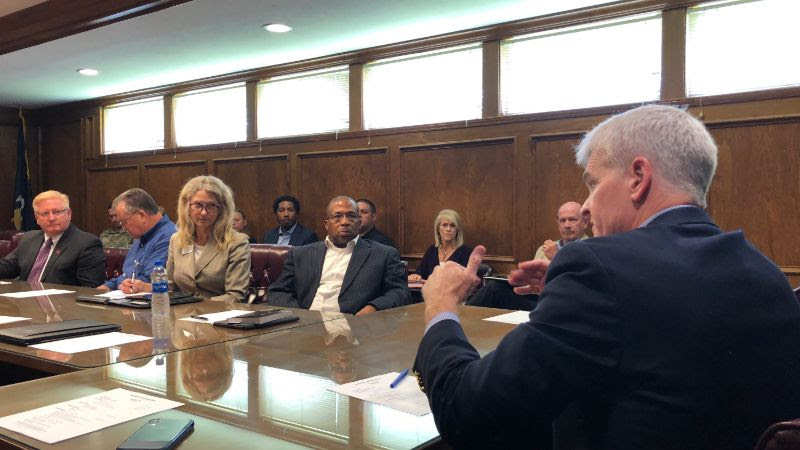 [Editor’s Note: This was originally published in the Bossier Chamber of Commerce’s Government Relations enewsletter. To sign up for it, click here.]

Tuesday’s Bossier Chamber of Commerce Board Meeting featured updates from the local federal delegation, including a visit from U.S. Sen. Bill Cassidy, M.D.

As the senator sat around the table with the board, he touched on many topics from a digital workforce to infrastructure to the opioid crisis.

Sen. Cassidy expressed concern for our growing infrastructure needs, including getting more money to dredge the Red River, more money for broadband buildout and more money for our roads and highways.

“The money for rural areas is there,” in relation to the buildout of broadband, Cassidy said. “We’ve been working and seeing this region as an engine for all the rural areas that surround. We are working closely with the USDA and the FCC. There’s about $100 million in grants for that to occur. If we can implement [the broadband buildout], we think our rural areas are better situated to integrate into the mainstream economy and you [Bossier] are the mainstream economy.”

U.S. Congressman Mike Johnson called into the meeting to talk about workforce and healthcare, two priorities of the Republican Study Committee that Congressman Johnson chairs. He reported that he is keeping priorities at Barksdale at the top of his list and, when asked, reported that H-2B visas, for temporary non-agricultural workers, are a political football in the current partisan climate.

From U.S. Senator John Kennedy’s office, John Barr reported the senator filed an unclaimed savings bond act, giving states access to records on billions of dollars of matured and unredeemed savings bonds sitting at the treasury, to reunite the bonds with the bond holders.