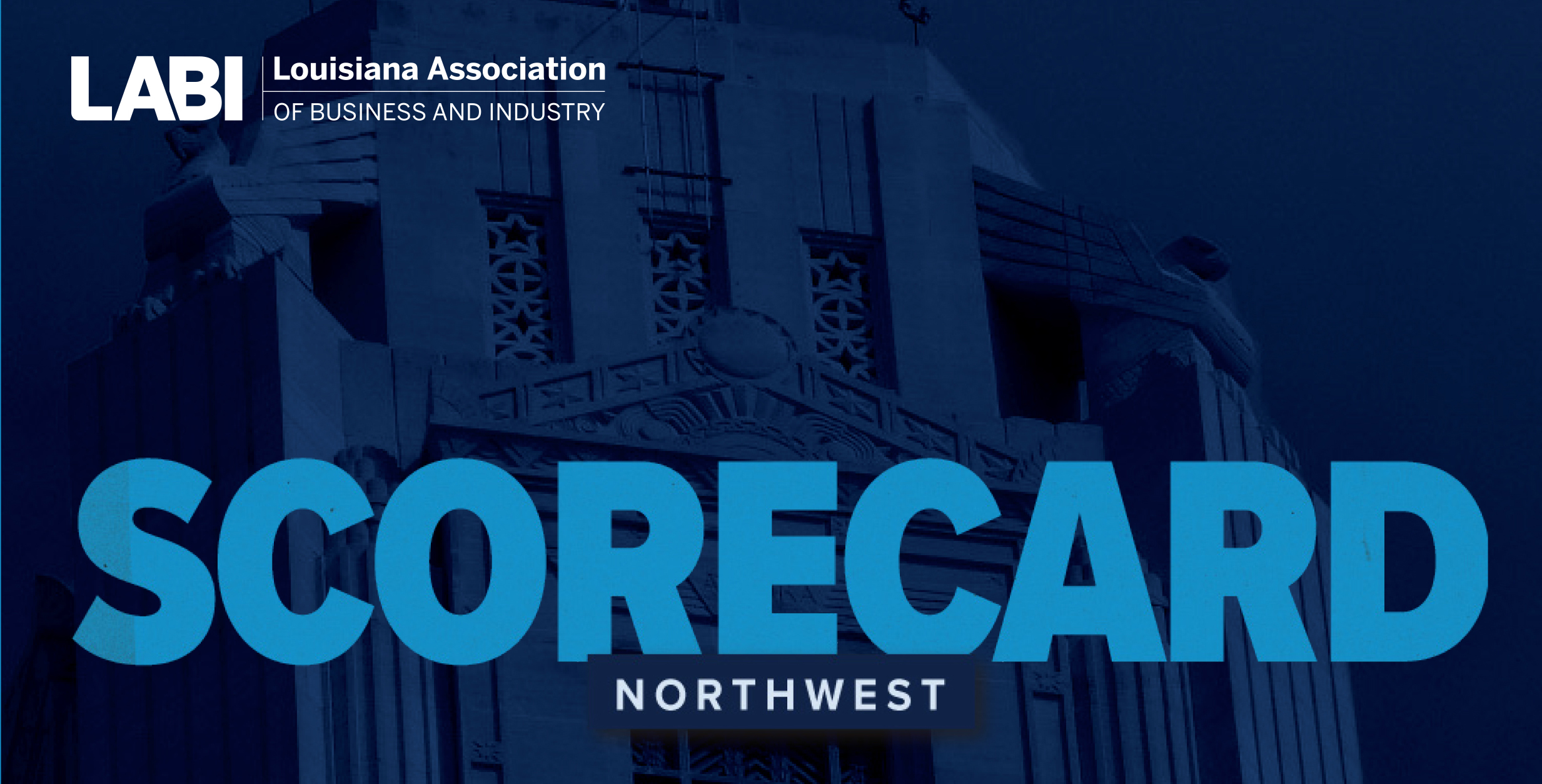 BATON ROUGE — The Louisiana Association of Business and Industry (LABI) has released its 21st Legislative Scorecard, highlighting legislative leaders who consistently voted in support of pro-business legislation on behalf of Louisiana’s employers and workforce both during the 2019 Legislative Session and over the past four-year term.

Overall, 24 legislators earned the ranking “All-Stars,” scoring 90 percent or higher on legislation important to LABI and the state’s employers during the past four-year term. Those term All-Stars from the northwest Louisiana delegation include: Raymond Crews (R-Bossier City), Dodie Horton (R-Haughton), and Alan Seabaugh (R-Shreveport).

NWLA Delegation Legislators named as “Honorable Mentions,” scoring 80 percent or higher on legislation important to LABI and its members during the past four years, are Sens. Barrow Peacock (R-Bossier City) and Thomas Carmody (R-Shreveport).

“While the 2019 scores are a helpful indicator of which lawmakers are focused on pro-growth, job-creating solutions, the real story is the cumulative term total,” said Stephen Waguespack, LABI President and CEO. “Legislators had to navigate an especially anti-business environment at the Capitol over the past four years, with tough battles, unique challenges and votes requiring particular courage on behalf of free enterprise. We’re proud to recognize those legislative leaders who rose to the challenge, especially as a critical election season kicks off what could be a turning point – or a point of no return.”

You can see the full NWLA scorecard below:

During the 2019 Session, LABI sought comprehensive tort reform, taxpayer fairness, and improvements in the economy. A bill to require simple refunds of unconstitutional state taxes was signed into law by the governor. A major infrastructure funding package is now law that repurposes settlement funds from the Deepwater Horizon incident, and a statewide ridesharing bill passed after years of defeat in the Senate Judiciary A Committee.

However, a package of bills to enact common-sense legal reforms to begin to lower high auto insurance rates flew through the House and once again met its fate in that same Senate committee.

The major focus of this year, however, was “comprehensive tax reform” where the governor’s main proposal was a $900 million Commercial Activity Tax (CAT) to replace the temporary one percent state sales tax. The CAT was a stark departure from the recommendations of the state’s blue-ribbon task force and LABI says it would have proved a disaster for the Louisiana economy. LABI led a chorus of voices that contributed to this proposal’s bipartisan demise in a legislative committee.

When the new governor and legislature took office in 2016, the singular focus was to fill a deficit in the state budget by whatever means possible. Ultimately, a temporary one percent sales tax was enacted along with a bevy of tax changes on Louisiana businesses that led to the state’s No. 1 rank for growth in state and local business taxes in the nation from Fiscal Year 2016 to Fiscal Year 2017 at an alarming rate of 12.5 percent compared to two percent nationally. Within days of adjourning the third session of 2016, the governor released an Executive Order with seismic changes to the Industrial Tax Exemption Program as well.

“This term was long on battles and short on accomplishments,” Waguespack continued. “With a few notable exceptions, the primary achievement has been defined by our leaders as full funding for government programs that are currently running surpluses in the hundreds of millions of dollars. However, this ‘win’ came at a steep price – higher taxes on individuals and employers across the state but also the resounding message to the nation that Louisiana stands ready to tax and sue the private sector to ensure government services can continue at record levels.

“But it is not too late to right the ship. Dozens of legislators worked diligently to prioritize the state’s economy throughout the past four years, and the state’s employers are grateful for their hard work and dedication. In this scorecard, LABI is proud to recognize lawmakers who took courageous stands to defend free enterprise and to promote common-sense reforms to improve the Louisiana economy both in 2019 and throughout this difficult term.”

To see scores across all of the state legislators, visit labi.org/score-card to review this year’s report.