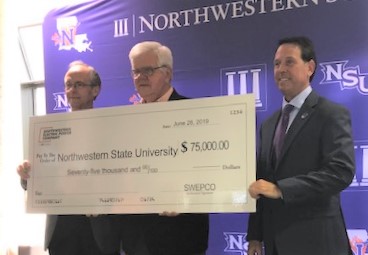 SHREVEPORT – Public Service Commissioner Foster Campbell has presented an additional $75,000 in aid to Northwestern State University arising from the purchase of the Valley Electric Membership Cooperative by SWEPCO in 2010.

Campbell on Friday presented NSU President Chris Maggio with a check for $75,000 to supplement $231,000 already donated by Valley/SWEPCO.  Maggio said the total to date of $306,000 from Valley/SWEPCO is being used to match $80,000 in State Board of Regents funding, bringing the total budget impact on the Natchitoches school to $386,000.

NSU is using the funds for university endowments, scholarships and grants.

The Valley/SWEPCO money originates from Valley Electric capital credits accumulated over the co-op’s 70 years of service.  After buying Valley in 2010, SWEPCO refunded $25 million in capital credits owed to the families and businesses that were Valley members.

“Efforts to locate co-op members who were owed money are completed,” Campbell said.  “At my request the Public Service Commission has dedicated the remaining one percent of Valley capital credits to NSU,” Campbell said.

Campbell, who championed the Valley sale to SWEPCO in 2010, said former Valley members are paying 13 percent less for electricity today with SWEPCO than they were as co-op members in 2010.  In addition, since the sale SWEPCO has invested nearly $100 million in tree-trimming and other improvements in the eight-parish Valley territory.

Maggio said the donation of Valley funding to NSU means the co-op continues to contribute to the wellbeing of the Natchitoches community and its university.

“Northwestern State students are the direct beneficiaries of this donation,” said Maggio.  “Many of our students come from the area formerly serviced by Valley Electric.  Many are first-generation students.

“These funds, which support scholarships and faculty development, will be used in the best interest of individuals pursuing the dream of a college degree.”

Malcolm Smoak, president and chief operating officer of SWEPCO, said all former Valley employees were hired by SWEPCO and are valuable members of the SWEPCO team.

“Their focus on customer service and dedication to Valley is visible each day through their hard work to deliver safe, reliable and affordable energy to our customers,” Smoak said. “Our continued investments in the power grid, our employees and the community are possible because Valley members voted overwhelmingly in 2010 to join SWEPCO.”