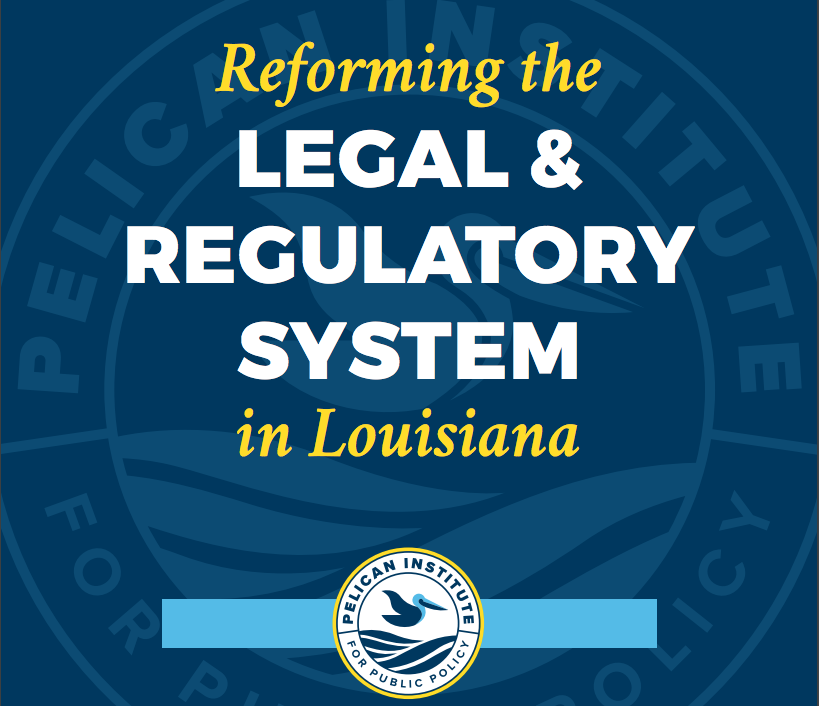 NEW ORLEANS — The Pelican Institute today announced solutions to help Louisiana shed its reputation as a legal swampland with the release of its legal and regulatory reform plan for the state, the newest in its series of deep-dive policy solutions under the nonpartisan policy platform, “A Jobs and Opportunity Agenda for Louisiana.”

With a business climate consistently ranking among the worst in the nation and a lagging economy, reforms to Louisiana’s legal and regulatory systems are much needed. Louisiana lawsuit costs are among the highest in the nation, as families and job creators across the state pay nearly $7 billion in annual tort litigation-related expenses.

The high costs of the state’s legal system is also hurting Louisianans’ bottom lines in other ways. According to the National Association of Insurance Commissioners, Louisiana has the highest auto insurance rates in the country, with the average driver paying at least $1,500 a year. Additionally, thanks to abusive and excessive litigation practices by some plaintiffs’ attorneys, combined with ongoing concerns about judicial integrity and a perceived lack of fairness, Louisiana’s courts are nationally known as some of the worst places in the country to be sued

Aside from legal system troubles, Louisiana’s burdensome licensing and other complex regulatory structures are also harming citizens’ ability to succeed for themselves and their families. For example, Louisiana is the only state in the country that requires florists to obtain an occupational license before they are allowed to arrange flowers for consumers.

To address these key issues, the Pelican Institute has developed a number of solutions to put Louisiana’s jobs climate back on track, including eliminating the jury trial threshold, ending predatory state-sponsored litigation, increasing judicial transparency, restoring the right to earn a living and improving financial and reining in the authority of government bureaucrats, among others.

Daniel Erspamer, chief executive officer of the Pelican Institute, said there may be no better example of the broken status quo approach to issues in Louisiana than the current makeup of the state’s legal and regulatory structures.

“Louisiana’s current legal and regulatory environments are doing very little to encourage and, in some cases, directly discourage the growth of jobs and opportunity for working families in our state,” said Erspamer. “It is time to level the playing field for all Louisianans, and that means enacting common sense reforms to make our legal and regulatory systems competitive with the rest of the country. We will continue falling behind if we do not address these critical areas.”

For more information on the report and other Pelican Institute initiatives, visit PelicanInstitute.org.