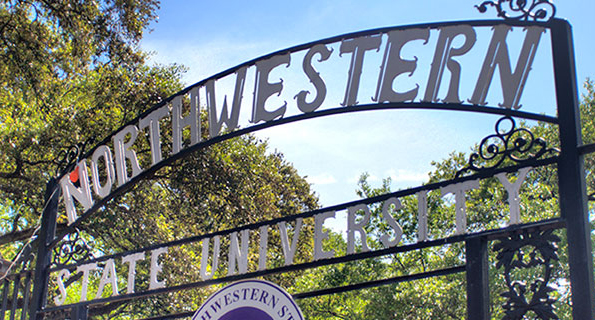 NATCHITOCHES – Several improvement projects have been completed or are underway at Northwestern State University, including renovation of the campus bookstore, upgrades to classroom facilities and improvements at the university’s satellite campuses.

“We have been tackling several projects aimed at upgrading facilities, meeting ADA compliance and improving roads and parking to make our campuses welcoming and accommodating to all who visit,” said NSU President Dr. Chris Maggio.  “There are many more projects on the horizon as the university continues to grow and find ways to better serve our students and visitors.”

The former Neebo building at 912 University Parkway is being overhauled to create the Northwestern State Marketplace, which will house an updated and expanded university bookstore and a Chick-fil-A Express.  Both will be open to the general public as well as NSU students this fall. The bookstore is in development in cooperation with Follett Higher Education Group, which will operate the 8,000-square-foot bookstore.

Across the street, a circular drive and ADA compliant parking area were installed in front of Watson Library for library patrons and those who visit Café DeMon.  NSU’sAcademic Advising department will relocate to the first floor of Watson Library with access through the Academic Success Center, which completes the revitalization of Watson’s first floor where the Academic Advising Center, Academic Success Center and Testing Center are all in one location.

Crews are working to overlay the parking lot on the west side of Turpin Stadium and its adjacent stretch of Caspari Drive to increase available parking spaces.  The main entrance of Turpin will also undergo cosmetic improvements to enhance the game day experience and bolster school spirit.  Caspari Street will be straightened between the NSU Fieldhouse and the Walter Ledet Track and Field Complex to facilitate traffic flow and provide additional parking.  Earlier this year, an overlay of Sam Sibley Drive from University Parkway to Caspari was completed.

The university is currently installing an elevator in the Teacher Education Center and is developing a concrete activity platform behind the TEC which is also ADA accessible. Other building upgrades include a privately-funded remodeled state-of-the-art classroom in Bienvenu Hall and plans to improve the heating and air conditioning equipment that will continue this fall.  Several individual departments received enhancement funds to upgrade classrooms and equipment. NSU is also exploring energy-saving measures by seeking Requests For Proposals for steam pipe elimination and lighting conversion to Light Emitting Diode (LED) fixtures for all buildings.

Construction will begin soon of a new pavilion at Iberville Green for student activities and concerts.  Iberville Green is the hilltop former site of Sabine Hall next to Iberville Dining Hall and in recent years has become a popular spot for student events.   Some offices for the NSU Foundation will move to Russell Hall.

At NSU’s Shreveport campus, the university has teamed with Follett to open a new bookstore in the university library to better serve Shreveport nursing students and a project is underway to improve ADA accessibility at the Warrington Nursing and Child and Family Network building.  In Natchitoches, NSU’s College of Nursing is installing a nursing lab with 10 nursing hospital beds for Natchitoches nursing clinicals students.

Major renovations are underway as the Learning Center for Rapides Parish converts to the Northwestern State University Cenla Campus. Improvements include new signage, cosmetic work, classroom renovations and technology upgrades. Some areas have been reconfigured to accommodate larger classes and provide space for upgraded labs and instructional areas, conference meetings, faculty offices for class preparation and advising and an open vending area.  The library will include improvements to the study area and student lounge.

Plans for NSU’s Leesville campus include facility upgrades, cosmetic work, upgrades in technology and landscaping, which will commence this fall.  At NSU’s Marksville location, some offices have been relocated and workspaces improved.  The Barksdale location will include new signage and expanded offices for staff to meet with and advise students.

Visitors at the Rec Complex in Natchitoches will notice that flooring in the pavilion and pro shop and pro shop furniture is being replaced. Outdoors, the putting green was replaced and expanded and 2,000 running feet of cart path added.  The driving range is under development and the city of Natchitoches installed nine perimeter poles to hold driving range nets. Improvements with landscaping and the golf course continue throughout the year.

The courts at the Jack Fisher Tennis Complex on the main campus, which are enjoyed not only by student-athletes but by health classes, faculty/staff, LSMSA and the community, have been resurfaced.  In Prather Coliseum, the N-Club Hall of Fame has been updated and modernized to include a touch screen for biographies, photos and footage of individuals in the N-Club. The Stroud Room in the Athletic Field House has been improved to serve as a backdrop for interviews with an attractive photo representation of NSU Athletics, vision and core values. A portion of the lobby in the Athletic Fieldhouse is being outfitted as a nutrition area for student-athletes.