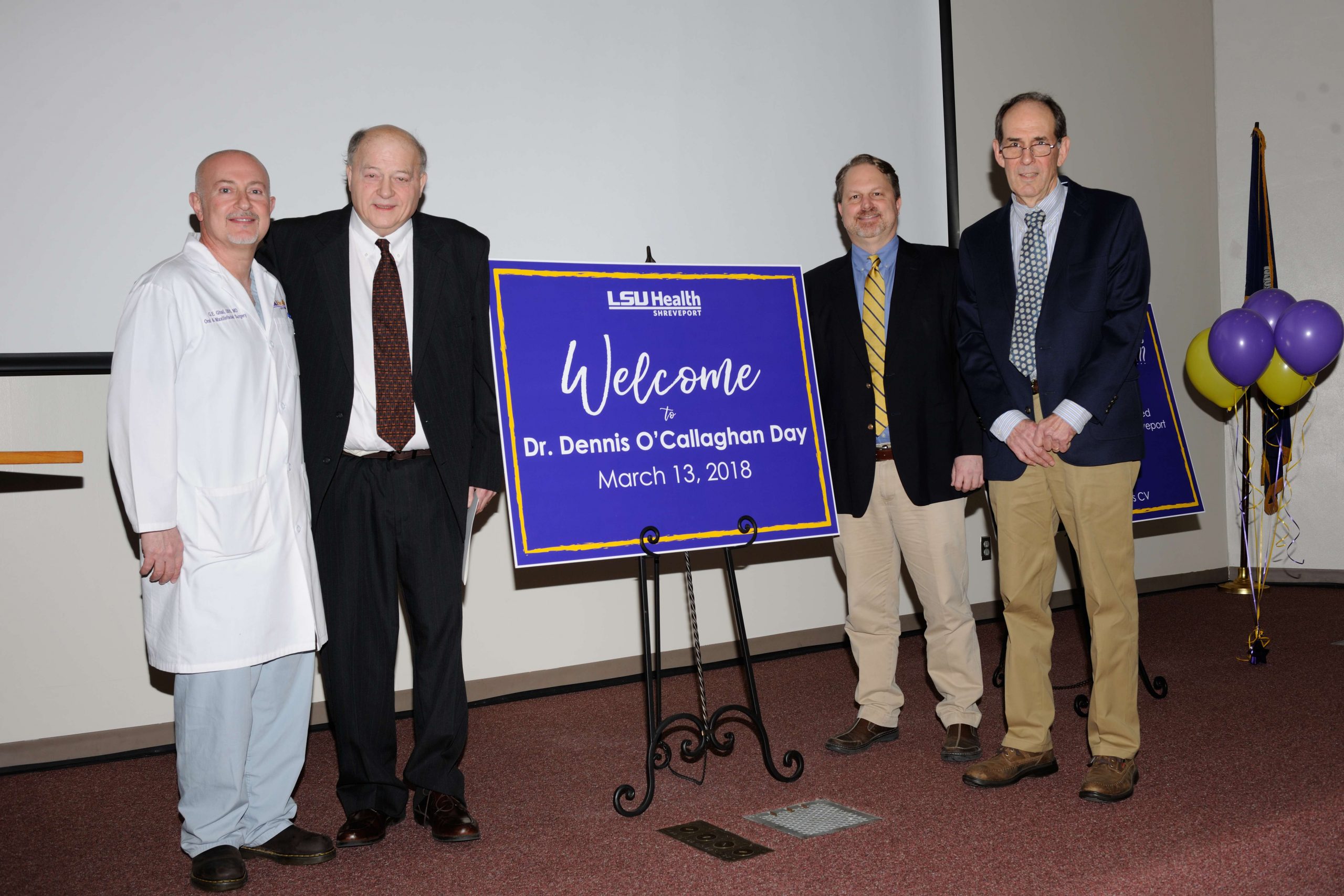 Dr. Dennis O’Callaghan has dedicated nearly 34 years as the Chairman of Microbiology and Immunology at LSU Health Shreveport. This week he celebrated his retirement with a reception in his honor attended by family members, students, and fellow LSU Health Shreveport faculty members.

Dr. O’Callaghan has taught approximately 10,000 students, postdoctoral fellows, and medical residents throughout his career. He was named the Chairman of the Department of Microbiology and Immunology at LSU Health Shreveport in 1984, a position he continues to hold today. He was named a Boyd Professor in 2002, which is the LSU System’s highest designated professorial rank. In the 60 year history of the Boyd Professors, only 70 have been named indicating this pinnacle of recognition. He is also the Willis-Knighton Endowed Chair of Microbiology, the first endowed chair at the LSU Health Shreveport campus. In honor of his many achievements and contributions, Shreveport Mayor Ollie S. Tyler deemed March 13 as “Dr. Dennis J. O’Callaghan Day.”

At LSU Health, Dr. O’Callaghan developed the Doctoral Program in Microbiology and Immunology and established the Center for Molecular and Tumor Virology (CMTV), which was awarded 15 years of funding by the National Institutes of Health’s (NIH) National Center for Research Resources. His contributions to research at LSUHSC are extensive. He was the first faculty member to be awarded a COBRE grant, which supported the CMTV, and has secured more than $39 million dollars in research funding, the most of any faculty member in the history of LSU Health Shreveport.

“Whatever I have accomplished is a reflection of the caliber of my colleagues, students and post docs. I owe a special thanks to former LSU Health Sciences Center Vice-Chancellor Dr. Ike Muslow who recruited me and encouraged me to continue my career in Shreveport resulting in a happy and productive life,” reflected Dr. O’Callaghan.

Dr. O’Callaghan has been consistently involved in his field in a local, national and international capacity. He served two terms on the Microbiology National Board Exam Committee, and has served as an External Reviewer of doctoral students at several universities. He has served on many national panels and study sections for research agencies, including the National Institutes of Health (NIH), the United States Department of Agriculture (USDA), the National Science Foundation (NSF), the American Heart Association (AHA), and the American Cancer Society (ACS). He organized numerous national and international scientific meetings, including the International Herpesvirus Workshop, the American Society for Microbiology, and the American Society for Virology, which he was a founding member of, serving two years as the Program Organizer and one year as President from 2000-2001.

“It is difficult to imagine LSU Health Shreveport without Dr. O’Callaghan as he is truly an icon in our institution. His work ethic, focus, love of students and brilliance will long be remembered and appreciated,” stated Chancellor and Dean G. E. Ghali, MD.