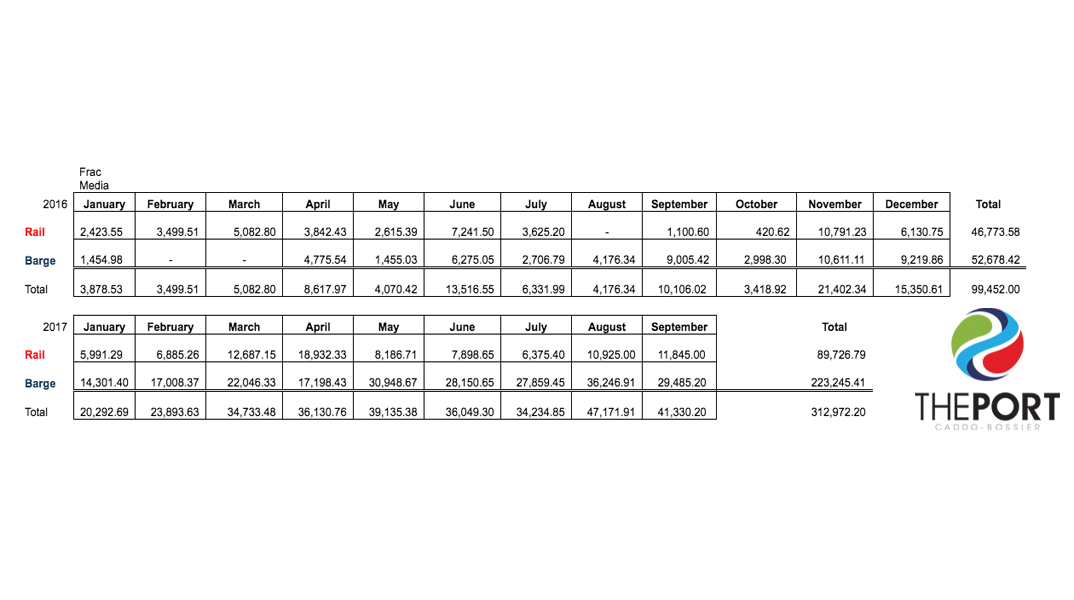 Two major engines of the northwest Louisiana economy are seeing a comeback, and their success is playing off one another.

The Port of Caddo-Bossier is shaking off the downturn of the past two years while the Haynesville Shale natural gas play is coming back from a nearly decade-long lull.

The reemergence of the natural gas sector in the area has the Port seeing an increase in materials used for support of exploration and production. It’s led to what Executive Port Director Eric England calls their “comeback year.”

“Barge tonnage and revenues are up and forecast to be up for the remainder of 2017-18,” England previously told BIZ. Magazine. “And the year will get even better with expansion for existing clients and our relationship with a new client, Nucor, who is moving a variety of steel products through the Port to their east Texas mills.”

In particular, the need for frac media among Port tenants has seen distribution increase. Through September 2017, 312,972 tons of frac media has come through the Port’s rail and barge systems. That is a dramatic increase over 2016, which saw only 99,452 tons in the entire year.

The outcome is simple: More revenue for the Port.

“While our tenants and customers profitability improves, this stabilizes jobs as well as expansion opportunities at the Port of Caddo-Bossier,” said England.

England explained their investment in infrastructure for unit train shipments (large train shipment that all carries the same product) has made them a destination for processing materials used in natural gas and steel products.

“The Port not only operates its own barge stevedoring service, we also operate a rail road within the Port Complex. Both of these modes of transportation have been heavily utilized in the increased amount of frac media,” he explained.

The Port’s successful turnaround in following the upwards trend in natural gas was forecasted by Economist Dr. Loren Scott in his report on Louisiana and the Shreveport Metropolitan Statistical Area (MSA) in October.

Scott noted that the area would see a “real jump start” to the MSA’s economy from the Haynesville Shale, a source that has been “a drag” for the past few years.

Scott said that after peaking at 142 active rigs in April 2010, the rig count nose-dived to only 16 rigs in June of 2016. But it has seen that count almost triple this year.

“Happily, a revival is underway in this play, with the rig count in July 2017 at 43 active rigs and rising steadily,” Scott’s report stated.

The Haynesville Shale’s proximity to LNG export facilities in south Louisiana and also to pipelines that are exporting natural gas into Mexico. The latter is especially important because these exports are increasing exponentially as Mexico converts its electric power generation from fuel oil to natural gas.

If forecasts hold true and more natural gas exploration and production comes in 2018, England said, “Overall, we will see an increase in materials transported through the Port at customer and port facilities. This increase in activity could lead to additional employment and investment.”

While Dr. Scott noted during his presentation, ”Much depends on what happens at the Port in terms of attracting new industries and it looks like they got a couple very close on the hook of being announced here. Shreveport’s very fortunate to get those.”