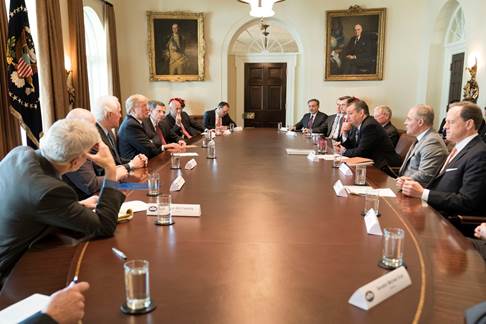 WASHINGTON—U.S. Senators Bill Cassidy, M.D. (R-LA) and John Kennedy (R-LA) visited the White House today and met with President Trump and several administration officials regarding potential changes to the federal Renewable Fuel Standard (RFS), which mandates that diesel and gasoline contain increasing amounts of ethanol and other renewable fuels, as determined by the Environmental Protection Agency (EPA). Up to 150,000 jobs are potentially at risk if American independent refiners go out of business due to the RFS.

“The current Renewable Fuel Standard is harming Louisiana refiners, families, fishers and workers,” said Dr. Cassidy. “The status quo is unacceptable, so today’s meeting with President Trump was a positive step in the right direction. I look forward to finding answers for this issue.”

“Louisiana is one of the nation’s largest energy refining states. As such, we have 17 refineries with thousands of workers who depend on maintaining a reasonable proportion of biofuels for the Renewable Fuel Standard (RFS). It’s imperative that we ensure our nation’s refineries have a seat at the table as we continue to debate a potential legislative overhaul of the RFS,” said Kennedy.

It’s estimated the RFS costs Americans 13-26 cents more per gallon at the gas pump—hundreds of dollars each year. The RFS also increases the price of corn, which has led to higher grocery costs for American families.

In January 2016, Cassidy introduced legislation to repeal the RFS.