Lt. Col. William “Bill” Fish, Jr. USAF, was honored as the recipient of the 2017 Young Professional of the Year Award at the annual 40 Under 40 Awards and Gala Saturday, Dec. 2 at the Shreveport Convention Center.
“The Young Professional Initiative (YPI) is a core program of the Greater Shreveport Chamber of Commerce, and 40 Under 40 is a great opportunity for us to celebrate the emerging leaders in our community,” said Dr. Timothy Magner, President of the Greater Shreveport Chamber of Commerce. “We are delighted to recognize this year’s class and to celebrate Lt. Col. Fish as the Young Professional of the Year for his leadership on behalf of our community and his service to our nation. Lt. Col. Fish is an excellent example of the caliber of our airmen and his engagement in the Shreveport-Bossier community highlights the positive relationship that exists between our community and Barksdale Air Force Base.” 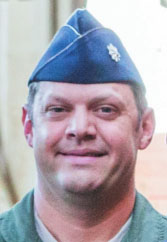 Originally from Flagstaff, Az., Lt. Col. Fish is currently the Commander of the 11th Bomb Squadron at Barksdale AFB. As a member of the 2nd Bomb Wing, Lt. Col. Fish deployed multiple times to the Pacific and flew combat operations in Iraq and Afghanistan. Lt. Col. Fish continued his education earning a M.A. in Industrial and Organizational Psychology from Louisiana Tech University and graduated from the US Army Command and General Staff College. Lt. Col. Fish returned to Barksdale following an assignment to United States Strategic Command where helped shape the nation’s nuclear plans.
He has served in multiple positions including the 2nd Bomb Wing’s Director of Staff where he represented the Wing at multiple civic organizations including the Greater Shreveport and Bossier Chambers of Commerce.
“The Bossier Chamber of Commerce is proud to be a part of the 40 Under 40 Gala,” said Lisa Johnson, President and CEO of the Bossier Chamber of Commerce. “Each year, we see another class of talented young people engaging in the community and making a difference. Congratulations to the 2017 class. We are extremely excited to honor Lt. Col. William “Bill” Fish as this year’s Young Professional of the Year, as Barksdale Air Force Base and its airmen serve as an integral part of our community’s success.”
Dedicated to improving the quality of life in our region, Lt. Col. Fish helped establish the Roots for Boots Airman Sponsorship program, and supports for The Global Power Museum Association, and Evangel Learning Center among other organizations. Lt. Col. Fish has two children with his wife Jennifer.